Paul Meade talks about using Shakespeare's Hamlet as inspiration for his new contemporary play Sham, set in a gritty urban landscape, indulging fantasies of gangsta rap culture, and the discipline of writing in verse aided by the poetic language of Limerick...

About 5 years ago, I was directing a production of Hamlet at the Helix. I had a great cast, great designers and fantastic support from the producer, Donal Shiels. I was very happy with the production and we tried to connect with the mainly student audience through contemporary design, while staying true to the original story.

Overall it was a success, but you will always have one or two audience members who are more interested in Snapchat than Shakespeare. One day during the run I had an image of a contemporary play that took the plot of Hamlet but remade it for an audience that had no interest in Shakespeare's language. It came to me instantaneously but I could visualise it very clearly with a set design and everything.

That image stayed with me and I made notes of how the play might come together. Don’t get me wrong, I wasn’t rejecting Shakespeare. I remain passionate about his plays but I thought this notion might push my own playwrighting skills in another direction. I worked with Gerry Stembridge, who acted as a script editor on the play, and Gerry encouraged me to write in verse in order to honour the source material. I’m not sure how successful my efforts have been, but the act of trying to write in verse has definitely pushed my writing into a different space. I was very grateful for the freedom that afforded me. Trying to write in a poetic manner is simultaneously a very disciplined and a freeing process. It motivated me to draft and redraft as I went but it also allowed the characters to speak in a heightened manner at times. I am from Limerick and I decided to use the Limerick idiom, but at the same time I tried to create a world that was mythical, universal and had its own logic. The poetic language helped me to do that.

In 2019 I was awarded a commission by the Belltable:Connects Initiative and that helped me to write a first draft of the play. I called it Sham. It tells the story of a young woman who returns from college in England to attend the funeral of her father who has been killed in a gangland shooting. She becomes embroiled in the politics of the insular world that she has escaped from and is sucked back in.

Trying to write in a poetic manner is simultaneously a very disciplined and a freeing process.

Hamlet is a great mix of the supernatural, the tragic and the comic and I have tried to stay true to that with Sham. I am fascinated by how families and communities that are involved in the drugs trade have managed to separate themselves from society to a large extent. Their notion of law and order is different from what is generally accepted and that creates a really interesting dissonance. These families exist in many different places in Ireland and in Limerick too.

At one point in the play, Sham decides to make a short rap video to provoke the conscience of the man who killed her father. She enlists the help of a junior member of the gang and they have great fun indulging their fantasies of rap and gangsta rap culture. We see them creating concepts, sharing stories and rehearsing scenes. They get to perform murders and become murderers in a safe space. It makes them consider what motivates them, what drives them and what binds them together. The exuberant fun of those scenes comes before the play takes a darker turn but I hope that Sham will do something similar for audiences in Limerick and online. One of the most powerful things in theatre is the very transgressive act of becoming someone else. It shows us that we all have the ability to transform ourselves, our lives and the lives of those around us. Hopefully for the better.

Sham (like Hamlet) is a tragedy, but in this way it is a play about hope too. I think audiences will respond to that and to the superb cast and crew that are bringing my play to life at the Belltable in November and then online throughout the country in early 2022. 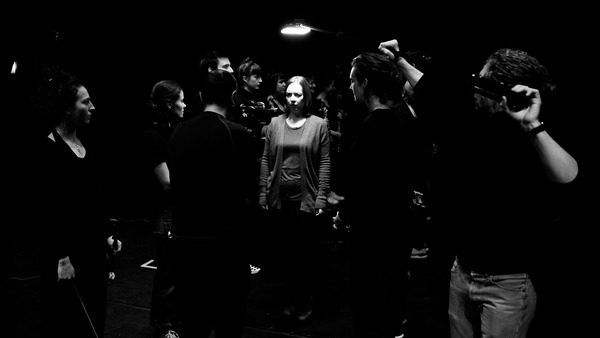