Harry Crosbie OBE is best known as the developer who transformed Dublin during the late 1980s and 1990s - now he's published his debut collection of short stories, Undernose Farm, published by Lilliput Press.

In this expanded edition of his original privately published book of twelve stories published in 2020, Crosbie recreates city life during the early 1960s, told through tales of the Dublin and Dubliners who peopled his hard-scrabble world.

Hairoil O'Reilly ran a budgerigar-breeding business as a front for his after-hours robbery work.

He had studied the social order and concluded there was nothing at the so-called top that he did not already have. Posh accents and following orders were not for him. Fur coat, no knickers. Losers; sheep: stick it. He was a main man and all who needed to know, knew. No social climbers here.

Every man of standing in the docks kept a loft and raced pigeons. Fanciers – always loved that word. The lofts were kept like little palaces. Each morning the fanciers stood in a line on the bridge which spanned the main shunting yards that led into the port. Height, you see. The pigeons like it. It worked on natural gravity and followed the gentle contour cradling the city to its river. The main lines formed into hundreds of sidings. Each polished track of old silver slithered to the south in the morning sun.

Two ancient steam locos wheezed all day and mothered the trains into their bays, single wagons rolled silently on the grade. At baby-steps speed. Not a sound. Dangerous. Watch your back. Shunters rode the trains by sticking a long paddle into the axles. They sat on them with legs crossed and glided along, easy as pie on the curving tracks. Not a care in the world. Whistling. It looked like a nice way to spend a morning.

The bridge had a wide parapet and fanciers put their cages of birds up on it. Training for racing was serious. This was a ‘smoko’. A time of rest, quietness, no sudden moves, soft talk, man to man. This was the birds’ time, and they knew it. Flying in joyous, sunlit circles, soaring out over the river and the morning city and back to a helping hand and a warm nest. Then, when the birds had homed, a quiet smoke – a smoko. This was done after signing on at the labour. Mug money, mickey money. Only fools and horses.

Hairoil had followed his father Brylcreem into the exotic-bird business. Yes, it was funny, but you’d laugh behind your hand. They had an Uncle Shiner. No prizes for guessing why. More hair on a goosegog.

Brylcreem had built up a clientele of rich old and not-so-old ladies from the Southside who collected birds. On Sundays, big cars would wait at the top of his terraced street while the ladies viewed his stock. He took them by the side entrance into his shed – his aviary, as he called it. Notions. The wife was at her mother’s on Sunday. Refreshment during business was always a Baby Power by the neck as is traditional and proper. He showed them his exotic wares. Say no more. Another satisfied customer.

Every year he sent the wife and her sisters to Benidorm for a fortnight. Respect. This was the social event of the summer for the whole area. His son kept up the family tradition.

It was bringing the sisters that gave the trip its power and magic. Tales of moonlight bingo, karaoke by the pool. Jealous whispers. Presents drew a big silent crowd for the unpacking. Once I got a paper sombrero. Heelball, still have it.

Hairoil had a large notebook and binoculars for his bird training.

‘What does it mean?’

‘I’ll tell you,’ he said, ‘but you have to take it to the grave, or trouble. Understand?’

‘East, track 19, export, con bogie 42, whiskey, Friday,’ he said. ‘I know every container. The load every week, every shipping cycle, export/import, every weekly manifest,’ he said, looking at the sky. ‘I like working out plans, logistical resources.’

‘You’re wasted,’ I said. ‘You should be running a large corporation.’

‘How would you get a container out of here?’ I asked. ‘They must weigh twenty tons.’

‘Twenty-three point seven,’ he said. ‘Did you ever get a puncture? Did you use a jack to lift the car? Did you ever see a big-truck jack? They lift thirty tons. They go under any load. Bottle jacks, they’re called.’

‘Listen and learn,’ he said. ‘Foggy night. Match of the Day. Liverpool. Fake roadworks here. Fencing, vans, gear. Four-man team goes down a Jacob’s ladder blacked out like the minstrels.’

‘Rope ladder with timber steps. Pilots go up them to get onto ships at sea.’

‘What are minstrels?’ I asked.

A favourite story, told and retold. Lino, an old docker watching, said, ‘By Jaysus them blacks can sing.’

‘Why Lino?’ I whispered in Hairoil’s ear.

‘He’s always on the floor.’ His brother Rolo was fond of sweets. Easy.

‘People round here think Croke Park is for culchies. It’s only up the road. This was an English garrison port. We still do the pools, read English page-three-girl papers, watch soccer. Love Liverpool, love Liverpool. COME ON YE REDS!’ he chanted. ‘Not a man in that control tower will be sober or take his eyes off the telly during the match. He will shout till hoarse, we would be seen quicker on the moon.’

I laughed out loud with delight. The pigeon had the stiff, short legs and self-important strut. He had a puffed-up chest. It was uncanny. All he needed was a row of tiny medals. His malicious eye sought for any imagined slights. Perfect, perfect, perfect.

The next day I went to the bridge.

‘Serves him right,’ he said. ‘He wasn’t winning. Too much showing off. Hawk got him.’

I was silent. Poor Mussolini.

‘I want to show you something,’ he said. He opened the diary at the back, the business end. ‘In two weeks, a special load is on its way.’

‘How much would there be,’ I said.

There was a long silence.

Biddy was a man. Old school tough: no fighting, no biting, no crisps, no credit. Biddy’s was a singing house. Strict protocols, Saturday night only. Noble call by Mrs Mac, a lion tamer. Each man, woman, child got a turn. No coaxing. All knew the words and did their best. All got a round of applause and respect. At the end of the night, three songs belted out by the whole house. Crowd-pleasers. And always last, the house favourite: a hurtin’ song, a cheatin’ song. A woman who wronged her man. Delilah. Who but ‘Delilah?’ The crowd leaned into the pain, into the hurt. Wishing it away. ‘Why, why, why?’ The women knew.

Then: ‘Have you no house to go to?’ bawled out. The open swallow of the last pint. But no child ever went without new shoes for First Communion if money was tight in a house. Every little girl was asked for a twirl in her new frock. A half-crown each. Any man who beat his wife would feel those iron fists. A man’s man. Earrings optional.

Biddy had gone to sea at fifteen, as local men did at the time. Before containers that meant deep sea, blue water. Two years sign on, ship out. He did well. Bosun. Top wages, could lead men. Came home with tidy savings and bought the old pub. Lived upstairs. Had friends but never married. This was quietly accepted: every cripple has his way to crawl.

On a quiet afternoon he would potter behind the bar in a ladies’ blouse with a string of pearls, sometimes mascara, always gold earrings and perfume. Never a word said, not a dicky. Your private life is your own. When he did this, sailors showed their tattoos when tattoos were still mysterious. Seamen then could sew, knit, weave, make and mend. Life at sea made them neat and tidy. Shipshape, Bristol fashion. You could see it in them, the way they stood.

Then a ship would be into a foreign port for weeks as cargo was worked by hand from deep between decks by coolie labour. Time to read and write letters. These men were different. They had friends in Japan, Vietnam, Spain. They could set a table properly.

In the snug. Little hatch. Small doors closed. Business being done, men at work. Manners cost nothing. Morning sun outside peeping in as it should be. Two black pints settling nicely, staring up at us. Lovely.

Undernose Farm Revisited by Harry Crosbie (published by Lilliput Press) is out now. 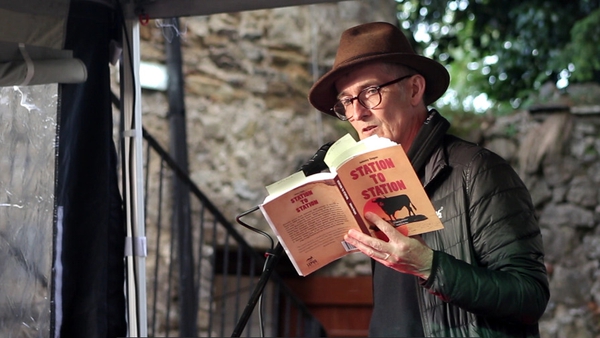 Station To Station by Johnny Gogan - read an extract