Via EPIC The Irish Immigration Museum: In 1895, Oscar Wilde was sentenced to two years in prison for the crime of gross indecency - this was how his homosexuality was viewed under British law at that time.

In the aftermath, his wife Constance took their two children to Switzerland and changed the family’s surname to Holland. All through school the two boys had to disguise their true identity and in later life they retained their adopted surnames.

However, three months into his imprisonment in London, another Wilde was born nearby. Oscar’s niece Dorothy - or Dolly - would carry on the Wilde name. In fact, she would grow up to be immensely proud of her uncle.

Dorothy Wilde was the only child of Oscar’s brother Willie. A successful journalist but a chronic alcoholic, Willie died just a few years after Dolly’s birth from an illness related to his drinking habits.

Impoverished and unable to cope, Dolly’s mother Sophie Lily Lees left Dolly at a rural convent. Little else is known of her early years.

According to Joan Schenkar’s book Truly Wilde: The Unsettling Story of Dolly Wilde, Oscar's Unusual Niece, she only ever shared one anecdote about her childhood. In Paris, she told a friend that when she was little she liked to dip sugar lumps in her mothers perfume and eat them - a tale suitably matched to the extravagance and bizarre behaviour of her later life.

Joining the war effort in France

As a teenager, Wilde fled to France eager to help out on the frontline during World War I. She ended up in Paris - the same city where her uncle Oscar lived out his final few years.

Because of the war, women could go to work and avail of opportunities unthought of before. Wilde took up a role on an all-female team of ambulance drivers. Here, she met the British cross-dressing, Standard Oil heiress Joe Carstairs who later became known as a power boat racer.

While the two women were housemates in Montparnasse, Carstairs became one of the first in a long string of Wilde’s lovers.

From the front line to Paris’s social scene

During the interwar years, Wilde remained in Paris. The liberal city was a haven for both creatives and lesbians. On the Right Bank, there were lesbian bars like The Monacle. On the other side of the city, private get-togethers took place at the apartments of the scene’s wealthiest women.

Thanks to her quick wit, charming conversation and a strong resemblance to her uncle, Wilde secured invites to these private parties. Although she herself didn’t write, she also became part of the city’s literary circles.

According to Eleanor Fitzsimons, who wrote Wilde’s Women, Wilde lived out of her suitcase moving between hotels, borrowed apartments and the spare rooms of her well-off friends. Much like her uncle used to do.

While Wilde is remembered by others for her eccentric charm and good looks, she undoubtedly battled many demons.

Although Wilde was proud of the fact that several men had proposed marriage to her, she was exclusively interested in women. She had affairs with many well-known names, including Russian-American actress Alla Nazimova and The New Yorker’s Paris correspondent Janet Flanner.

She also attempted to seduce novelist and socialite Zelda Fitzgerald, which annoyed her husband Scott immensely. He even portrayed Wilde in an insulting light in his novel Tender Is the Night. But he cut the offending page before publication.

Wilde eventually began a decade-long relationship with Natalie Clifford Barney - the writer and railroad heiress from Ohio who, thanks to her high position in society, was openly and unashamedly lesbian.

For over 60 years, she hosted a weekly literary salon in her home at 20 Rue Jacob. It was famously frequented by some of the era’s most beloved writers. But she held some women-only events as well.

Here, Wilde met Barney, who was 20 years older and was obsessed with her uncle whom she had met as a child. Wilde moved into the 'blue bedroom’ at 20 Rue Jacob, but here her growing struggles with addiction worsened.

Behind the charming persona

While Wilde is remembered by others for her eccentric charm and good looks, she undoubtedly battled many demons.

She was an alcoholic, like her father and her uncle. But she was also hooked on heroin and cocaine. Despite her many attempts at detoxing, she could never stay away from them.

And, despite their long-term relationship, Barney continued to have serious relationships with other women. Sometimes this took a toll on Wilde. According to Eleanor Fitzsimons, once when Wilde was staying at the classy Hotel Montalembert, the manager contacted Barney asking her to take Dolly to a sanatorium because his other guests were tired of her distressed cries.

Wilde even attempted suicide on a number of occasions and her body bore the scars. Then, in 1939, a doctor diagnosed Wilde with breast cancer. But she refused his recommendation of surgery and sought alternative treatments.

Based on his advice, she did spend four days bathing in the water at Lourdes, according to author Joan Schenkar. But upon her return, she continued old habits and often sought out drugs on the streets of Paris.

The year after her diagnosis, Wilde returned to London as the German army invaded France. Here, she continued treatment but ended up adding sleeping medication to her long list of addictions.

The following year, Wilde was found dead in her bedroom at her flat in Belgravia. The coroner, who labelled her a ‘spinster’, couldn’t identify the cause of death. It may have been related to her drug use or her illness.

Luckily, the details of her life have come to light as writers and researchers take an interest in her story. Though she didn’t become a writer, she once declared: "I am more Oscar-like than he was like himself." Not only did she carry on Wilde's name, but she also lived up to it.

EPIC’s new exhibition Out in the World highlights members of Ireland’s LGBTQ+ diaspora. To mark Dublin Pride, admission is FREE until July 1st. After this, entry will be covered by admission to the EPIC Emigration Museum. Book your tickets here. 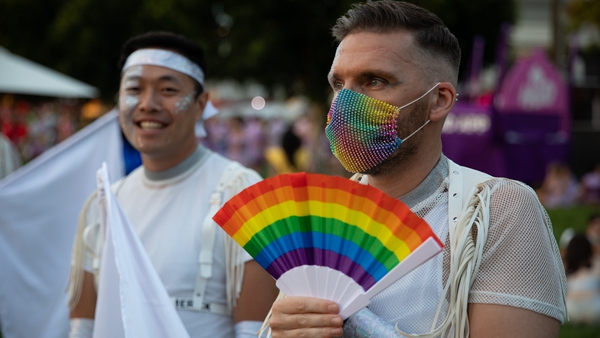 Out in the World: An LGBTQ+ exhibition made while stuck inside