To celebrate his 80th birthday, we're delighted to present an extract from Reclaiming the European Street: Speeches on Europe and the European Union, 2016–20 by President Michael D. Higgins, edited by Joachim Fischer and Fergal Lenehan and published by Lilliput Press.

The Future of Europe

We have entered a period when, I would say – and not for the first time in many years – the future shape of the European Union has become a matter of dispute and often ill-tempered debate. In the ongoing and lingering shadow of Brexit and of social forces which have given rise to so much doubt across Europe, the challenges of the next decade simply cannot be met with a re-issuing (and revamped version) of an invitation, to a new generation, of the old orthodoxies. The refurbishing of what has gone out of balance in failing models will be insufficient. For example the existing aspirations to integration cannot accommodate, without contradiction, such diverse mixed models of capital, not to speak of such measures as would retain cohesion as a major aim: thus they are certainly not capable of restoring a sense of authenticity, resonance or meaning to a citizenship of the European Street.

A new mind for Europe is required, which requires a casting aside of failing assumptions within inadequate models. It requires new symmetries between the social, the economic, the cultural and the ethical. These symmetries, if they are to be achieved, will require changes in the institutional architecture of the Union. Yet if the intellectual and political contribution of the Union's members is simply one of reaction and adjustment to a wild, unregulated globalization, the prospects for such are poor. The space for the new institutional architecture and the role of intellectual work will have to be fought for. It is also a question (…) as to whether the massively increased realm of the unaccountable at global level, the forms of financialized capital, its success in defeating international accountability, may make democracy itself impossible.

The starkness of my reservation as to prospects suggests the urgency of the legitimation crisis that has now begun to beckon. Social cohesion is fracturing as inequalities in wealth, power and income are deepening, as labour becomes more precarious and our societies become increasingly divided between what is often lazily described as the’ lucky’ and the 'left out’, those on the street and those behind gated communities, those who can access highly paid employment and those left to struggle on zero-hour contracts.

Within the European Union, cohesion between the Member States has also declined, creating, I suggest again, a problem of connection and legitimacy with the European Street, as we have allowed ourselves to become divided by a common, one size-fits-all macroeconomic policy framework, which continues to pit creditor against debtor, and those with trade surpluses against those without, those in the North against those in the South. It is difficult to see the ‘sharing’ a union implies in the defence of asymmetrical advantages that flowed from the impatient establishment of monetary union. Yet there are challenges within on which we could cooperate and still bring a union into existence, such as one that inspired the thinking of the visionaries of Ventotene. I refer to the opportunities to address together our responses to climate change, the forms of growth we need to change including the imbalance between nature and an economic form that is reminding us that our planet is not insatiable, forms of economic life and practice that assumed an unquestioned form of assumed infinite accelerated growth, far beyond efficiency, and which, if sustainability is ever to be achieved, must be questioned.

The unprecedented accumulation of greenhouse gases in the Earth’s atmosphere – a legacy of a mere two centuries of industrial civilization, which now threatens a 4.5 billion-year-old planet, whose human population is now most vulnerable to, and as yet unprepared for, the catastrophic consequences of climate change, with all of the devastating implications that arise for the displacement of people, involuntary migration, the degradation of the environment and the eruption of new conflicts over diminishing natural resources – must concern us all.

In those times of hubris, of uncritical pursuit of ever-accelerating growth without consideration as to consequence, of silent toleration of powerful elite opposition to regulation, the space for any pluralist discourse becomes narrow. In the boom years of the early 2000s many policymakers, shapers and takers were ensnared in a single paradigm of thought – an extreme hegemonic (p 39) theory of the market, which was too readily accepted as some form of inevitability, an unavoidable achievement of modernity. It was a discourse from which the voice of the street was not merely neglected but excluded. Politics was rendered servile or near impotent in service to what was ever more abstract and unaccountable. It found its extreme expression in the assumption that there was no area of life in which the optimum circumstances could not be provided from the marketplace. Previous egalitarian discourses lost their space. The concept of the public world was now out of fashion and in so many circles could not now be heard. To speak of redistribution was to be regarded as having been stuck in the past. The models within which we have struggled favoured concentration in ownership and unregulated accumulation of wealth, both have often been achieved by the privatization of previously public assets. Such a version of modernity would not find any contradiction either when it would be suggested as unavoidable in the socialization of private speculative debt – a debt that had not been the result of the action of the public but rather of private speculative investors and their institutions.

We have entered a period when, I would say – and not for the first time in many years – the future shape of the European Union has become a matter of dispute and often ill-tempered debate.

The global loss of life and disruption to our daily lives resulting from COVID-19 is unprecedented in living memory. Indeed, it was only in 2019 that I held a seminar at Áras an Uachtaráin to mark the centenary of the last pandemic of similar magnitude, that of the so-called and misnamed Spanish flu .

From COVID-19 we have been reminded through tragedy and suffering that we have a shared, globalized vulnerability that is common to all humanity, one that knows no borders. We are learning how we must make urgent changes to improve resilience in a range of essential areas, such as work, healthcare and housing. We have been forced to recognize our dependence on our public sector frontline workers, and the state’s broader role in mitigating this crisis and saving lives.

There is now a widespread, recovered recognition across the streets of Europe, and indeed beyond, not only of the state’s positive role in managing such crises, but of how it can play a deeper, entrepreneurial, transformative role in our lives for the better. The erosion of the state’s role, the weakening of its institutions, and the undermining of its significance for over four decades has left a less just and more precarious society and economy, one ill-prepared for seismic shocks such as COVID-19.

The role of the state, thus, needs to be recovered, understood, accepted and defined anew, as well as the concept of sovereignty, in such a way that sovereignty is shared, can flow for the benefit of citizens beyond borders, can have a comparative and regional character; one that has the capacity to be exemplary for global economic systems.

Better ideas that will generate more inclusive, transformative and transparent policies are now required – ideas based on equality, universal public services, equity of access, sufficiency, sustainability. Better ideas are fortunately available for an alternative paradigm of sustainable social economy within ecological responsibility. We now have a rich contemporary discourse, to which scholars such as Ian Gough, Mariana Mazzucato, Sylvia Walby, Kate Raworth and others are contributing; scholars who advance progressive alternatives to our destructive, failed paradigm. The regular contributions to Social Europe from such scholars and so many others is offering opportunities for a necessary discourse. Such scholarship indicates that we are neither at the end of history or of ideas, to reference the hubristic construct of Francis Fukuyama.

Out of respect for those who have suffered greatly, those who have lost their lives, and indeed the bereaved families, we must not drift into some notion that we can recover what we had previously as a sufficient resolution, nor can we revert to the insecurity of where we were before, through mere adjustment of fiscal- and monetary-policy parameters. That would be so (p xii) wholly insufficient to the task now at hand. A brighter horizon of opportunity must emerge, one which offers hope.

It is not only the case that the COVID-19 pandemic provides us with an opportunity to do things better; it also enables us to realize what is destructive of social cohesion and the environment. We must have the courage to examine critically the assumptions that brought us to this point. This crisis will pass eventually, but there will be other viruses and other crises. We cannot allow ourselves to be in the same vulnerable position again. On the most basic level, we should recover and strengthen instincts of moral courage we may have suppressed, which the lure of individualism may have driven out, displacing a sense of the collective, of shared solidarity, allowing the state’s value and contribution to be derided and disregarded, so that a narrow agenda of accumulation could be pursued.

The scale of the change that is now required is, to my mind, similar to that which occurred in the late 1980s and early 1990s in Central and Eastern Europe, an invocation of a moral future of peace similar perhaps in scale, scope and significance to that advocated in the Ventotene Manifesto in its day by Spinelli and Rossi.

Our challenge now is surely to draw on the best of indomitable instincts of solidarity and ingenuity as COVID-19 confronts 21st-century society and its world economy with a new kind of emergency hazard. We must galvanize those sentiments across the citizenries of the globe, invite a discussion on the inherent flaws of our current model, and create the capacities needed for embracing a new paradigm founded on universalism, sustainability and equality.

Looking ahead, my vision, of which I continue to write and speak as I try to avoid any Adornoesque pessimism, is of a Europe with quality public services at its core and decent jobs in the public sector. We must remember that the services the public sector delivers are not a cost to society, but an investment in our communities. This message must be taken to, and accepted in, the heart of Europe. It can help restore credibility and build a partnership with the European Street and its discourse. The ‘unaccountable’ – speculative flows of insatiable capital, a global, unregulated, financialized version of economy – represents the greatest threat to democracy, the greatest source of an inevitable conflict, and the greatest obstacle to us achieving an end to global poverty or achieving sustainability. The lessons of necessity and solidarity learnt during the pandemic must now inform a European-led transition to a just and ecologically sustainable society in its aftermath. I am hopeful that, within an enlightened eco-social framework, we may respond together in a transformative, inclusive way to the COVID-19 pandemic, climate change, the impact of digitalization, rising inequality and the unaccountable, and, in doing so, address the democratic crisis facing so many societies in Europe and beyond. 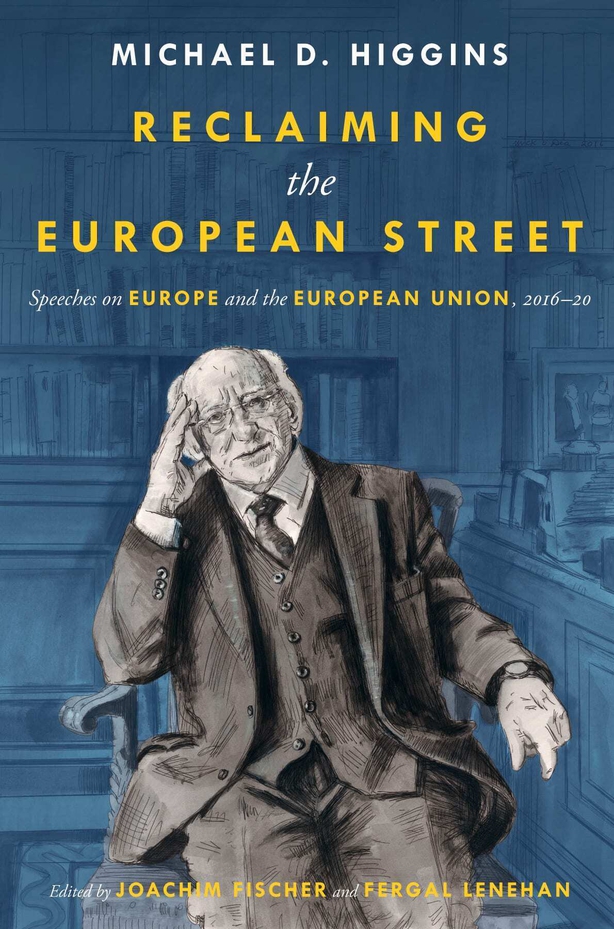 Reclaiming the European Street: Speeches on Europe and the European Union, 2016–20 by President Michael D. Higgins, edited by Joachim Fischer and Fergal Lenehan (published by Lilliput Press) is out now.