We're delighted to present an extract from Four Killings, the new book from broadcaster and RTÉ History Show presenter Myles Dungan, published by Head Of Zeus.

The story of the fate of a single family during the Irish Revolution, Four Killings is a book about political murder, and the powerful hunger for land and the savagery it can unleash.

Myles Dungan's family was involved in four violent deaths between 1915 and 1922. One man, Jack Clinton, an immigrant small farmer from Co. Meath, was murdered in the remote and lawless Arizona territory by a powerful rancher's hired gun; three more died in Ireland, and each death is compellingly reconstructed in this extraordinary book...

In 1920, alongside the War of Independence, an older conflict continued, in the form of the ancient Irish struggle for land. This led to the creation of a number of bands of young men around the country in the tradition of the 'Whiteboys' or ‘Ribbonmen’ of the violent land agitation of the 19th century. One such group, about a dozen strong, caused considerable mayhem and greatly inconvenienced the IRA in North Meath/East Cavan around the village of Cormeen. It became known as the Black Hand Gang and managed to dispossess a number of farmers of their land before their activities were checked by the County Meath IRA under Seán Boylan. In May 1920 a dispute involving the Clinton family came to a head and a killing took place that is unique in the annals of the Anglo-Irish War.

One of the acknowledged leaders of these latter-day Ribbonmen was a British ex-serviceman who had seen action in the Boer War, William ‘Bloomer’ Rogers from Relagh Beg. He nurtured a historic grudge against the world in general and the landed classes in particular. In 1883 his late father, Michael Rogers, had been removed by bailiffs from his farm near Baileborough, Co. Cavan. Although his mother was ‘reinstated in an equivalent holding on untenanted land’ in 1918 by the Estates Commissioners, that Land War-eraeviction gave Rogers an aura of moral authority which he would exploit in the agrarian crusade that he and his collaborators unleashed on north Meath.

Old Joe Clinton’s decision to rent four disputed acres from his cousin, Phil Smith, may have constituted an act of pragmatic husbandry, or of hazardous solidarity. The received wisdom of the Clinton family points to the latter, but the alluring tariff of £2 an acre must also have been an incentive. Phil Smith, who had approached his first cousin and sought Joe Clinton’s support against the threat of the Cormeen Gang, would have been aware of the partial immersion of the Clinton family (his sons Mark and Patrick in particular) in the Meath IRA. He must have hoped that this would help defend his Cormeen lands.

Blood being thicker than water, and with the prospect of their own property becoming a potential target, Joe Clinton and his sons Peter and Mark agreed to side with Smith. Their support, given the firepower of the Cormeen Gang, was courageous, if rather injudicious. Bloomer Rogers and his shadowy associates had plans for Smith’s land.

The ubiquitous threatening letter had long since become a feature of Irish agrarian agitation. This visceral literary genre was apt to include a rough drawing of a coffin, a warning about future behaviour and the cheery signature of ‘Rory of the Hills’ or one of his site-specific lieutenants. It was the early twentieth-century equivalent of today’s courageous trolling keyboard warriors, giddy in the security of their anonymity, whose interventions on social media ensure such a heady level of lucid political discourse.

The Cormeen Gang, however, had shown themselves capable of persuasive violence and had little need of menacing letters. They could safely skip the postal phase of an agrarian dispute. It may only have been the presence of two vigorous young men in the Clinton household – one of whom, Mark, was known to be an

IRA Volunteer – as well as the ready availability of their even more daunting older brother Patrick, which prompted the Cormeen Ribbonmen to issue a preliminary admonition. This took the form of a chilling and specific threat. The Clintons were forewarned by mail that if they intervened on behalf of Phil Smith, they would suffer the same fate as their close relative John Clinton in Arizona. ‘Jack’ Clinton was a small farmer who had been murdered in 1915 in a dispute with a huge neighbouring cattle ranch. In theory (Marxist theory at least), this was an inversion of historical reality. In Arizona, John Clinton was a struggling homesteader taking on well-resourced ranchers. In Cormeen, the Black Hand Gang were the self-styled underdogs contending with a grazier class exemplified by Phil Smith and his Clinton allies.

However, such historiographical niceties were of little concern to either side. Both would have seen their own cause as morally justified. The dialectic of the Cormeen Gang, based on the distinctly un-Marxist trifecta of ‘terrify, smash and grab’, stretched the definition of morality to breaking point. The Clintons ignored the written threat. In the middle of April they received a rude reminder that the Cormeen Gang did not indulge in idle threats. Peter Clinton took the family’s two plough horses into the disputed four-acre field adjoining their own property. As he set to work, he heard shots ring out and was hit, though not seriously injured. His attackers waited to see what would happen next.

On 10 May, Mark Clinton entered the disputed fields with two plough horses and began to plough the land owned by his father’s cousin. Accounts differ greatly as to precisely what then occurred. Only one thing is certain: Mark Clinton did not survive the day. Alerted to the presence of the younger Clinton in the disputed field, at least five members of the Cormeen Gang intervened. Among them was a twenty-one-year-old Presbyterian ex-serviceman, William Gordon, who lived with his widower father and two older brothers in the townland of Trohanny, near Baileborough. Gordon had been one of the five thousand or so Irish men who, safe in the knowledge that the Great War was rumbling to a favourable conclusion (from an Allied point of view), joined the British air force in the final months of the conflict in order to acquire a useful and marketable skill. He was retained by the RAF as a fitter, and also received weapons training. On this day, he fully exploited that. Gordon carried a gun into the field. The first act of the men who accompanied him was to shoot and kill the two Clinton horses. Accounts differ as to who was responsible for this, and whether the five men had originally intended to also murder Mark Clinton is a matter of conjecture. After his valuable plough horses had been slaughtered, Mark Clinton may have responded aggressively and provoked a fatal response. He may have threatened the gang members with the vengeance of the Clinton family, or worse still, with the intervention of the IRA.

Whether provoked or acting in accordance with a preordained plan, William Gordon raised his gun and shot Mark Clinton. The five men then abandoned the scene, leaving their victim for dead. 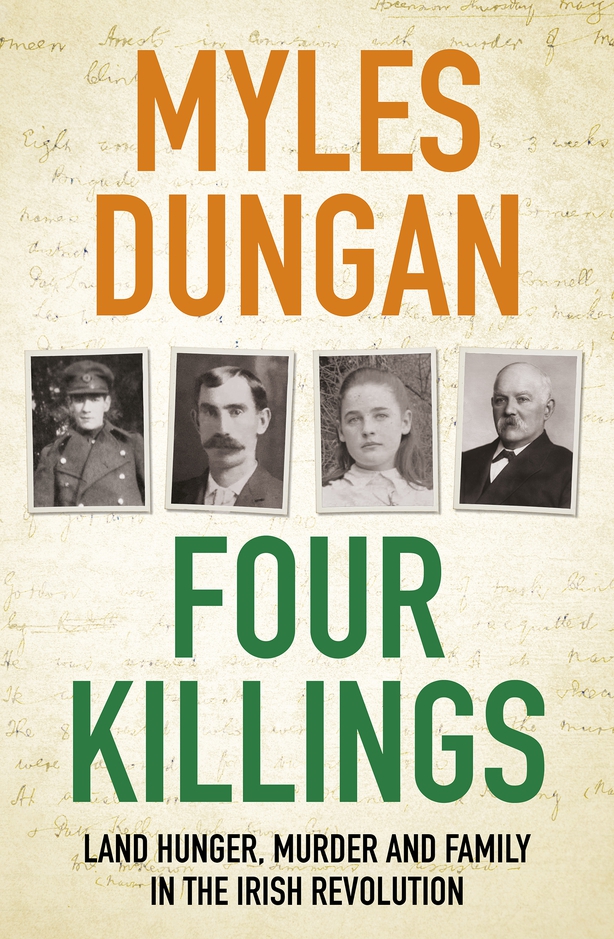 Four Killings by Myles Dungan, published by Head Of Zeus, is out now.