We're delighted to present an extract from Ten Days, the new novel by Austin Duffy, published by Granta.

When Wolf's recently-estranged wife Miriam dies from cancer, his entire world is turned upside down. Wolf and his daughter, Ruth, travel to New York from London to scatter Miriam's ashes in the Hudson River. During the ten High Holy Days of Rosh Hashanah and Yom Kippur they connect up with Miriam's conservative Jewish family, who are adamantly against Miriam's choice of burial. Battling the antagonism of Miriam's Orthodox family, Wolf is also coming to terms with his own hopes to put right wrongs before it's too late.

His daughter calls him Mike. She has done ever since the age of eight or so, when it began as a precocious joke whose origin nobody can remember. But it started around the time he left the family home, so he wasn't about to get all huffy about it, to make demands he wasn’t in any position to make, and it stuck. When his wife would hassle him about some small thing – like where he had been the evening before or, for that matter, an entire lost weekend – their daughter would lift her head up from her colouring book, saying, 'Yeah, Mike, where were you exactly?’, adding a note of irony to what was by that stage a fairly raw antagonism. He and his wife would look at each other and come close to smiling, and for a while it wasn’t clear whose side their daughter had taken.

But then it was clear, and ‘Mike’ disappeared from the scene and probably didn’t get much of a mention during the whole period of time that followed. Those years seemed to pass as smooth and continuous as a highway, with only the odd event registering – rarely in a good way – like road signs advertising some place you’ve never heard of and have no desire to go to. You veer there anyway. In other words, time passed, and he always seemed to be surprised by this.

His name is not Mike, or even Michael, but Wolf, as in Wolfgang. You’d think a child would relish that over the mundane alias she chose for him. Especially an English child, which Ruth was, having been born and brought up in London. But even later on, when he came back into things, the family fold et cetera, having barely seen her for the seven years of his exile, his daughter persisted with it, although now with more of an adult sensibility.

‘Look at Mike, sitting at the head of the table,’ she said on that first morning of his prodigal return, when she appeared at the kitchen door for breakfast and found him back in his old spot. ‘Where did you sleep last night then?’

‘Behave yourself,’ her mother said, but she was grinning.

This was one year ago.

He probably grinned also, unsure whether it bothered him or not, which it did of course. But the truth was he felt like a Mike that morning, a randomer who had insinuated himself back into things and was now encroaching with intent upon their female territory, like that recurring and most suspect of characters in the wildlife documentaries his daughter compulsively watched, the stray male.

The night before, he had flown back to London from Prague upon hearing about his wife Miriam’s illness. Her brother Isaac had called him – screaming at him over the phone – and he went straight to the airport, abandoning the woman he’d gone there with. He didn’t even have any luggage with him. When he arrived at Stansted he took a taxi directly to his old home. Miriam answered the door in tears and they held each other for a long time, all night in fact. Since then he had barely left her side, until two weeks ago, when she died of ovarian cancer.

‘I slept in our room, if you must know,’ was his reply to his daughter’s question, returning her gaze with directness, fig- uring that the only way to deal with a teenager was head-on.

Ruth shrugged, affecting nonchalance, before coming into the kitchen to get some cereal.

Even now, as she slept beside him on the aeroplane – in business class by the way – his daughter’s body was twisted as far away from him as her seat would allow, in case he attempted to take advantage by sneaking in some paternal affection. Truth be told he was tempted to try. Instead, he raised his glass, asking for more champagne. Most of the other seats were empty. It was midday over the Atlantic and the cabin was filled with light.

‘There you are,’ the stewardess said as she filled his glass. She remained standing next to him for a second.

‘You can pour her some if you’d like,’ he said. ‘She can have it when she wakes up.’

He looked at his sleeping daughter. ‘Yeah, I expect you’re probably right.’

Ruth was in a deep sleep, or pretending to be. On her TV screen a wildlife documentary about the ice caps played. A polar bear was trying without success to catch a seal, listening with his head to the ice before jumping to his feet and hammering down his heavy paws with all his might. His frustration seemed very human. It contained the desperate realization that he would never eat again, that he would never find rest, and that this was it for him and what a fool he was to know that this day was coming all along only for it still to happen to him.

Wolf turned back to the stewardess, but she was by now at the far end of the cabin. He rested his head against the seat and stared out the window at a battlefield of small clotted clouds. They looked like they had recently been decimated by a greater force and were waiting to be absorbed into the surrounding atmosphere. The sky was light blue and homogeneous, as expansive as you can imagine.

They were on their way to New York for Rosh Hashanah, the Jewish new year, which was later than usual this year, at the beginning of October. He had booked them into the Gramercy Park Hotel until the end of the following week and the festival of Yom Kippur, the Day of Atonement. Ten days in total. They would be spending a fair bit of time with his wife’s family, whom he hadn’t seen in twenty years. A dinner was planned, and one or two other things. He had it all written out on an itinerary, and almost every hour of the ten days was accounted for. On the final day Ruth would go to the synagogue with the rest of the family for Yom Kippur. She was Jewish, like her mother. Meanwhile, he would wander around Manhattan, visiting some of his personal landmarks for the final time – Juilliard, which his wife Miriam was attending when they first met; the New School in Chelsea, where he transferred to complete his MFA in photography; and most significant of all, the small apartment building in the East Village – if it still existed, and even if it didn’t – where he and Miriam had married, surrounded by a group of witnesses, friends mostly, given that her family hadn’t come to it. Apart from that, he would simply wander Manhattan, which he always considered to be his city, savouring in particular the nondescript parts, her wide avenues, for example, imagining that the flat earth ended at the uptown horizon, or the silent building tops and famous skyline which seemed to him always to be watching out or waiting for something. In the late afternoon he would meet Ruth and the others, once they were done with their interminable ceremony. Together they would say goodbye to his wife, scattering her ashes on the Hudson. It was one of her final wishes. She hadn’t specified where exactly, simply the Upper West Side, on her birthday, which this year happened to coincide with Yom Kippur. They would find a quiet spot, away from the joggers and the rollerbladers, taking turns to scatter her ashes on the water surface. Right now, they were in an urn in the compartment above his head.

Ruth stirred, and for a brief second she looked at him with her dark, almost black eyes. It was as if they were peering at each other across the divide of species. Then her eyes closed and her breaths became visible in her shoulders as they rose and fell, in a deep sleep again. His daughter didn’t know it, but this trip was for good. He hadn’t even booked return flights for them. After the ceremony by the water, the final farewell to Miriam, Ruth would move in with her mother’s first cousin Judy and her husband Allen. They had four children around the same age as Ruth, slightly younger and slightly older. Avram, Wolf’s father-in-law, also lived with them. This was his plan, although as well as not telling Ruth any of this, he hadn’t told Judy and Allen. He wanted to do that in person, to ask them – without being overly solemn about it – to look after his daughter, given that he himself would no longer be around. 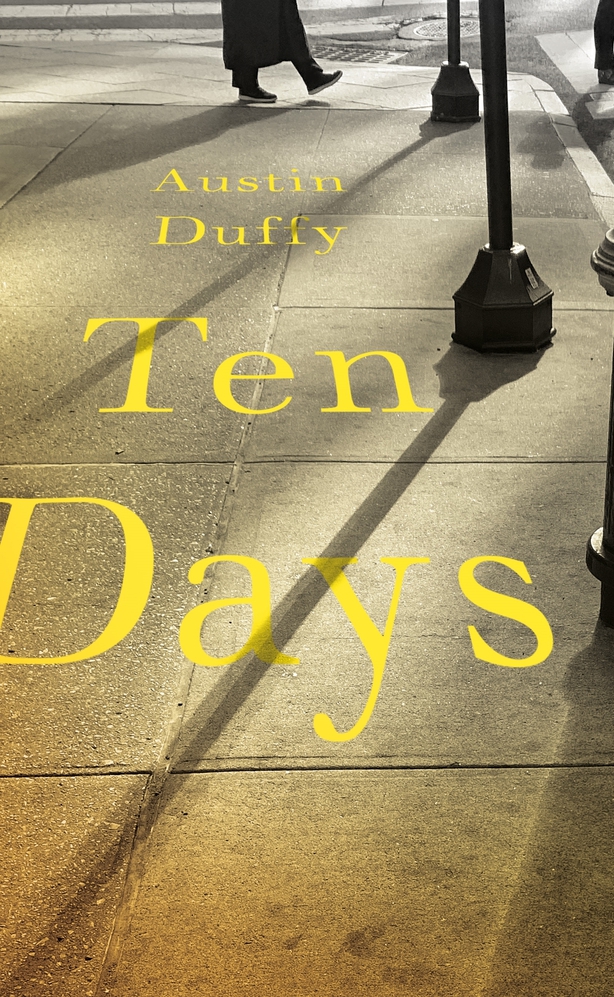 Ten Days by Austin Duffy (published by Granta Books) is out now.