We are delighted to present an extract from Carlo Rovelli's latest book There are Places in the World Where Rules are Less Important than Kindness, published by Penguin Random House.

Carlo Rovelli is a theoretical physicist who has made significant contributions to the physics of space and time. His books are international bestsellers which have been translated and have sold more than 2 million copies worldwide. John Banville calls him modern physics' poet.

There are Places in the World Where Rules are Less Important than Kindness is a collection of his newspaper articles published in Italy. They have long been required reading there, but this collection will be the first time that they're available in English. This book is gateway to the mind of one of the most influential thinkers of our age.

Bruno de Finetti: Uncertainty is Not the Enemy

What do we know with certainty? A significant branch of the philosophy of science is leaning towards an answer that has its roots in the work of a relatively little-known Italian: Bruno de Finetti.

De Finetti was born in 1906 in Innsbruck of Italian parents. He began his university studies at the polytechnic in Milan, and in 1936 won a competition for a professorship in mathematics, but failed to be appointed due to a law instituted by the Fascist government: preoccupied by a lack of patriotic fertility, it had prohibited the appointment of unmarried professors. He became an academic lecturer only after the war, teaching first in Trieste and later in Rome. At the centre of his interests was the mathematical theory of probability, to which he contributed theorems that are named after him. But his thinking ranged from politics to didactics, and his most original contribution was to the theory of knowledge. His ideas in this field were regarded as revolutionary at
the time and have today become a crucial point of reference for science.

To the question 'What do we know about the world with absolute certainty?', the response suggested by de Finetti would be: nothing. This in itself is hardly remarkable: it is the answer given in antiquity by Pyrrhus of Elis, and in modern times in various forms by some of the greatest philosophers, such as David Hume. But de Finetti identifies with acumen the nature of our knowledge, and understands how, notwithstanding the absence of absolute certainty, it can nevertheless develop in a rigorous and credible way and lead to convictions
that are justified and, above all, shared.

At the end of the nineteenth century, an era of triumphs for scientific thought and its applications, science appeared to offer a concrete kind of knowledge: Newton and Maxwell had understood the laws that ultimately govern our world. Logical positivism sought to analyse the way in which science obtained truths, on the basis of direct observations of the world. But it soon encountered serious problems: the realization, for example, that all observation is already coloured by theoretical prejudice, and that therefore there is no such thing as ‘pure’ observation. The revolutions that occurred in physics in the twentieth century have shown that even immensely successful, amply ‘confirmed’ theories, such as those of Newton and Maxwell, can turn out to be merely approximations. The historical and evolutionary, rather than definitive, character of our scientific knowledge was emphasized by historians of science such as Thomas Kuhn. Overturning the hopes of positivism, the Austrian philosopher Karl Popper exerted an immense influence upon scientists when he maintained that science is not characterized by the fact that its theories have proved to be true, but only by the fact that they can be proved to be false. Theories are true only to the extent that they have not yet been ‘falsified’. This means that there is nothing that we can know with certainty.

So, if we lack absolute certainty, what is the value of knowledge? De Finetti’s significance lies in the fact that he understood how we can have a shared and reliable knowledge without absolute certainties. His insight was into the subjective character of probability and the probabilistic, but the convergent character of knowledge. The key that makes this possible is a subtle theorem that we owe to an English mathematician of the eighteenth century, Thomas Bayes. Bayes demonstrated two things. Firstly, that every new piece of empirical evidence modifies the probability of beliefs. Secondly, and crucially, how these modifications lead our beliefs to converge, even if they are different to begin with.

The probability of a thesis is an evaluation of the extent to which we expect that the thesis will be true: it is subjective. But this probability changes with every experience. Bayes’ theorem tells us how this works. If my belief implied that an event is probable and it does in fact happen, then my belief is strengthened. Otherwise, my belief is weakened. If I maintain that the majority of stars possess planets, my conviction is reinforced by every new star that I see with an accompanying planet. The theorem explains this in quantitative terms. If we allow that real events influence our beliefs in a similar way, the theorem indicates that our beliefs eventually converge: they become largely justified by experience. In this way our knowledge, be it scientific or personal, historical or geographical, can be deeply reliable and rationally well founded, without the requirement of absolute certainty.

This is the key to how scientific knowledge works. I can argue that the Earth is probably flat and unlikely to be
spherical, and you can think that the opposite is true. But as we gradually notice together that the shadow of the Earth cast on the moon during an eclipse is round; that the further north we go, the higher the polar star is on the horizon; that Magellan went around the world by following the sun and arrived back in Europe, and so on, the probability that the Earth is flat diminishes until it becomes derisory. This way of thinking never requires us to talk about absolute certainty, of definitive conclusions, which would prevent us from ultimately understanding, and from really expanding our knowledge – but it does allow us to converge on sets of
convictions with an arbitrarily high degree of credibility. And this is what our knowledge consists of.

Let’s turn to de Finetti’s own words, beautifully written in a style somewhat redolent of the prewar
period: Science, understood as the discoverer of absolute truth, remains therefore, naturally, a source of disillusion for its lack of absolute truths. If the cold marble idol of a perfect, eternal and universal science that we could only seek to better understand falls and shatters, it is there that suddenly alongside it we find a living creature, a science that our thought freely creates. A living entity: flesh of our flesh, the fruit of our torment,
our companion in the struggle . . .

In the Anglophone world, it was thanks to the English philosopher Frank Ramsay that the subjective interpretation of probability was taken seriously at the beginning of the twentieth century. It was only much later, in the fifties, that the significance of de Finetti’s writings on the subject was recognized. The American philosopher Leonard Savage, who helped to spread de Finetti’s reputation in the Englishspeaking world, relates how he set out to learn Italian so that he could speak with and learn directly from him. Today de
Finetti is well known globally, though much less so in Italy. His manuscripts have been collected and archived in Pittsburgh, at one of the world’s leading centres of the philosophy of science. Appropriately enough, perhaps, since he embodies a type of deprovincialized Italian intellectual, open to the world and free from the longdominant Italian intellectual traditions: the shackles of Crocean idealism (which he dubbed philosofesserie, combining the Italian words for ‘philosophy’ and ‘hogwash’), as well as from the legacy of Hegelianism. In the great Italian tradition founded by Galileo, de Finetti was able to make technicomathematical and humanistphilosophical knowledge converge. His original synthesis of classical empiricism (Hume) and pragmatism (Peirce, James), centred on the notion of subjective probability, is becoming increasingly influential, especially in the philosophy of science, where it offers an elegant and convincing solution to the limitations of Popper’s thought. De Finetti was very much ahead of his time. His fundamental text, ‘Probabilism: A Critical Essay on the Theory of Probability and on the Value of Science’,
was published in 1931, and only translated into English more than half a century later, in 1989. And his book, The Invention of Truth, though written as long ago as 1934, saw the light of day only in 2006, thanks to the invaluable efforts of his daughter Fulvia. No doubt this lag was partly due to the fact that Fascism in its pomp could not countenance doubts about the truth.

In 1968 de Finetti reproved colleagues for their snobbish disregard of students – remarking, in a reversal of the usual order of things, that ‘students should always be listened to’. In 1977 I had the pleasure of sharing something with him: we were both accused of subversive association, and of inciting criminal acts. We both went into hiding, and were both shopped to the police. De Finetti responded cleverly and in style: he let it be known to the police that he would consent to being arrested at the entrance to the Accademia dei Lincei, or Lincean Society, Italy’s oldest and most prestigious academy of science, of which he was a member. His crime had been to write an article in support of conscientious objection to military service in Italy.

There is a profound lesson to be learned from de Finetti’s ideas, one that I believe relates to us all – to our daily and our spiritual lives, and to our lives as citizens: we cannot get rid of uncertainty. We can diminish it, but we cannot make it disappear. Hence we should not experience it as some kind of nightmare. On the contrary, we should be reconciled to it as our lifelong companion. In the end, it is a kind and good one. It is probability that makes life interesting. It is because of probability that we can be touched by the unexpected. It
is probability that allows us to remain open to further knowledge. We are limited and mortal, we can learn to accept the limits of our knowledge – but we can still aim to learn and to look for the foundation of this knowledge. It is not certainty. It is reliability. 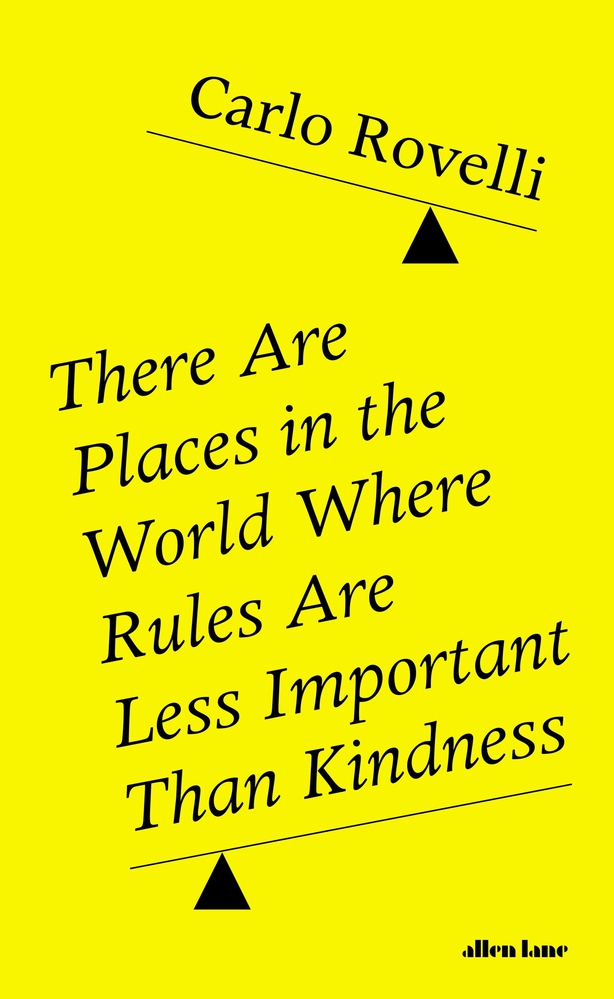 There Are Places in the World Where Rules Are Less Important Than Kindness by Carlo Rovelli is published by Penguin Press and is available nationwide now.