Director Conor Hanratty writes about The Persians, a new podcast that tells you everything you ever wanted to know about the oldest surviving Greek tragedy, brought to life in a vibrant new Irish translation, and presented as part of this year's Dublin Theatre Festival.

The Persians takes place in the aftermath of the battle of Salamis, exactly two thousand five hundred years ago. What makes it so fascinating is that it is an act of empathy. Greece won the battle, against all odds, and crushed the fabulously wealthy army of King Xerxes. The play imagines how it must have been for those left at home in Persia, slowly hearing a drip feed of bad news before the broken king gets home, his army in tatters.

Thousands of years of history between these neighbours means that tensions still flare up, as that booing audience made clear.The playwright, Aeschylus, was an eye witness at Salamis. His descriptions, even if they've been polished a little for patriotic or dramatic effect, come from real life. The battle cry of the Greeks still gets a round of applause when it’s performed in Epidaurus today. The play still asks questions about nationhood and patriotism.

It may be the oldest play in Europe, but at its heart there's a choice between empathy and nationalism. Between greed and justice. Between wealth and health.

It got me wondering - what might happen if I looked at this play in my own language? Irish is, after all, the oldest vernacular language in Europe. We are also an island nation. We also have a complicated history with our neighbours to the east. And we have our own rich poetic and dramatic tradition too.So I approached Nuala Ní Dhomnhaill, one of our greatest poets, and asked if she might be interested in translating the play. I was thrilled when she said yes.After years of research and development, the plan might have been to present a workshop performance of the play sometime this year, to mark two and a half millennia since the events it describes. This cruel year has, of course, forced us all to explore different avenues of creation.

Instead, we’ve made Persians - The Podcast, as part of this year's Dublin Theatre Festival. Over the course of the Festival, we’ll explore everything you could want to know about this amazing, timely play. It may be the oldest play in Europe, but at its heart there’s a choice between empathy and nationalism. Between greed and justice. Between wealth and health.

We have a company of some of Ireland’s finest actors, singers and musicians, as well as contributions from some of the world’s experts, who’ll be performing Nuala’s text and talking to me about what makes this play so special. We may not be able to put on the show this year, but we’ll create a theatre of the mind for you through conversation, music and poetry.

Even if we can’t all sit in a theatre, the show is going out at 8pm every night. There are ten episodes, and the show will end on the last night of DTF. But - unusually for the theatre - it will survive and stay available. I hope you’ll join our imaginative community as we spend time with this important play, given a whole new life in a brilliant, Irish translation. You can find full details - in English and Irish - on the website here.

Find out more about The Persians and this year's Dublin Theatre Festival here. 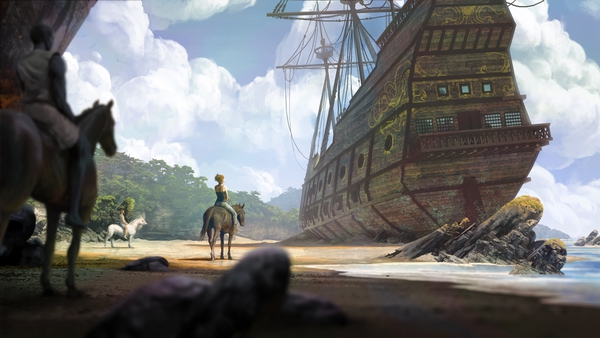 The Spinning Master - inside the epic new audio adventure