We're delighted to present an extract from The Glorious Guinness Girls, the new novel by Emily Hourican, published by Hachette.

The Glorious Guinness Girls are the toast of London and Dublin society. Darlings of the press, Aileen, Maureen and Oonagh lead charmed existences that are the envy of many.

But Fliss knows better. Sent to live with them as a child, she grows up as part of the family and only she knows of the complex lives beneath the glamorous surface...

The party is in a house on Regent's Park Road, one of the narrow ones, and seems to be all staircase and heavy wood panelling. It is dark and solid and old, and the contrast with the party guests makes me laugh, because they are light and gay and young. Watching them, I think of rice thrown at a wedding – flung upwards in brittle, polished, delicate handfuls, drifting down to land in shiny, scattered drifts.

They move endlessly. Some are dancing, alone and in pairs, others are simply flinging themselves restlessly at one group and then another, taking snatches of gossip and jokes, like bees take pollen, distributing it throughout the party so that soon everyone is covered in it, breathing it in and out. It is the girls who move most, I see, and particularly the girls like Elizabeth, Baby, Zita, Maureen, whom everyone has a welcome for.

They move so constantly that I find that if I stay in one spot, close to a table that is covered with many different bottles – every guest has brought something; 'it’s the new way,’ Maureen declared – it is easy to follow them as they loop around and around the room, keeping all the wheels of gaiety in motion.

‘What filthy stuff,’ says Bryan, beside me, tilting one of the many bottles and squinting. ‘I’m surprised at David.’ David must be the host, I think. Not that anyone seems to own this party more than anyone else – everyone here seems both equally proprietorial and equally indifferent. ‘Let me get you a proper drink,’ he says, disappearing.

To my left Ray Starita and his band play ‘Brown Sugar’. They might as well have tied lengths of string to the hands, knees and elbows of the entire party, I think, because every note is a twitch that sets the room in motion. I watch one girl with more tassels than

dress flapping her arms vigorously, twisting her knees in and out. The music is exuberant, invigorating, discordant, and they love it. It speaks to them about them, telling them that they are young and daring and new and nothing like them has been seen before. It does not speak to them of mud and death and failure, of rising prices and discontent, or of duty and responsibility.

Those who don’t dance, talk, and what they talk of is the General Strike, exactly as if it is the most terrific entertainment, put on for their benefit. Some of the young men have joined the London police force as Special Constables and are keen to present themselves in heroic lights. ‘Really, it was nothing,’ one of them keeps saying. He has a long nose and is entirely without chin, face dwindling into his lanky frame without interruption. ‘Anyone would do the same,’ he persists. ‘You would, wouldn’t you?’ to anyone who will listen.

‘Isn’t it cosy?’ says Maureen. ‘I do like the feeling that we are in here and anything at all might happen on the streets. Why, there might be a riot if those trade unionists get through,’ she says, face glowing.

‘Oh, but there won’t,’ says the chinless young man. ‘The police are awfully on top of things, and you know, we are here to protect you if there is any need.’

‘Well, I call that very reassuring,’ says Elizabeth Ponsonby, who is dressed in a frilled romper suit so short that it shows nearly all of her legs. ‘Don’t you call that reassuring, Maureen?’

‘I do not,’ Maureen says. ‘I can’t imagine how badly off I’d need to be to rely on you, Eddie,’ and the young man goes off looking mortified while Maureen laughs.

‘Too cruel,’ Elizabeth says in delight. ‘He’s the son of the Earl of Cranbrook, you know.’

It is, I think, indeed too cruel. But there is no point saying that to Maureen, who has grown to love the sharp intake of breath, the pin-drop silence, that follows her more outrageous put-downs, so that she now looks for exactly that, saying things that are deliberately styled in order to shock. That they also wound doesn’t seem to concern her. In fact, she seems not to notice that the hurt in the eyes of some of her victims is real, and not pantomime. She is rapidly forgetting that she was ever left on the outside, and how much that pained her.

I go and look for Oonagh, worried that she may be overwhelmed by a party that is noisier, more crowded, than any I have yet been to. If Maureen was quick to discover the secret life of London that was emerging among the select group of Baby and Bryan’s friends, gathering speed in the Cavendish Hotel and Café de Paris, then she was not the last. It seems that half of society has woken up to the same lure and followed her here. I see girls I recognise from last year’s frumpy debutante parties, Baby’s ‘Miss Mice’, now tricked out in shorts and sailor suits, their eyes blackened and cheeks rouged high up so that they look like sly, startled dolls. I wonder what their mamas must say. Even Marjorie of the Cadogan Square girls’ lunch is here, wearing a bonnet and waving a silver rattle madly in time to the music. I think how pleased she must be to be at least in the same room as ‘dear Lois’, who is dazzling in a Chinese silk kimono and bare feet, her hair held back with a silk headband the exact yellow of a blackbird’s beak.

Everywhere I look there are cocktails being shaken and poured, drinks slopping from glasses onto the floor that is by now sticky and filthy, large black and white tiles

disappearing under a film of grey. People are shrieking, gaily, I suppose, although it is not always easy to tell, and some of the costumes are so daring that I cannot understand how they fit with the theme at all. I spot Brenda Dean Paul – I recognise her at once because of her almost shocking slenderness and that mass of dark hair, in tight shining waves – wearing a very short black dress covered in sequins. It cannot, I think, be anything like what she once wore.

Stephen, himself angelic in a white lace gown and silver paint on his eyelids, must agree, because he says loudly, ‘So what is it exactly that you’ve come as, Brenda, do tell? The Ghost of Virtue Long Past?’ I am shocked that he would be so rude, but Brenda just smiles vaguely and carries on dancing.

‘That girl has been altogether too long in Berlin,’ Stephen says. ‘It’s starting to show.’

‘Whatever do you mean?’ I ask.

‘Well, you know Berlin,’ he says confidingly. ‘Miles ahead of us in simply everything.’ But I do not know Berlin. I look again at Brenda. She is the one of Maureen’s new friends – although perhaps ‘friend’ is not exactly the word for those two – that Cloé has taken against. ‘Something unpleasant about that girl,’ she said after the first time Brenda called. ‘Don’t bring her again.’

Brenda doesn’t look unpleasant to me. She looks uncertain. I recognise it, because it’s how I feel. For all the sophistication of her dress, her face is still that of a child. Her mouth is painted fire-engine red and set in a careful pout, but that does not disguise the bewildered look in her eyes, as though a camera flashbulb has just exploded in her face and she is momentarily disoriented.

I find Oonagh dancing with a boy in a velvet jacket. ‘Are you having fun?’ I yell over the sound of Ray Starita’s saxophone.

‘Oh yes!’ She takes a swig of the bottle she is holding. ‘And so should you be. Now go on and stop fussing.’

I walk back through the party towards the open front door because the balcony is so crowded that I cannot get air.

Aileen is sitting at the top of the stairs, a jacket thrown over her shoulders, smoking. ‘Sit,’ she says, holding a hand out to me. I sit beside her, although the stone step is cold and my dress is thin. ‘Here.’ She must notice, because she takes the jacket from her shoulders. ‘We can both sit on this. It belongs to Bryan, but he won’t mind.’ Bryan, I think, almost certainly will mind.

Below us, a group of revellers are dancing in the hall, shimmying up and down, bumping against each other with shrieks of laughter. I wonder what they must look like to passers-by. Except that it is too late for passers-by. 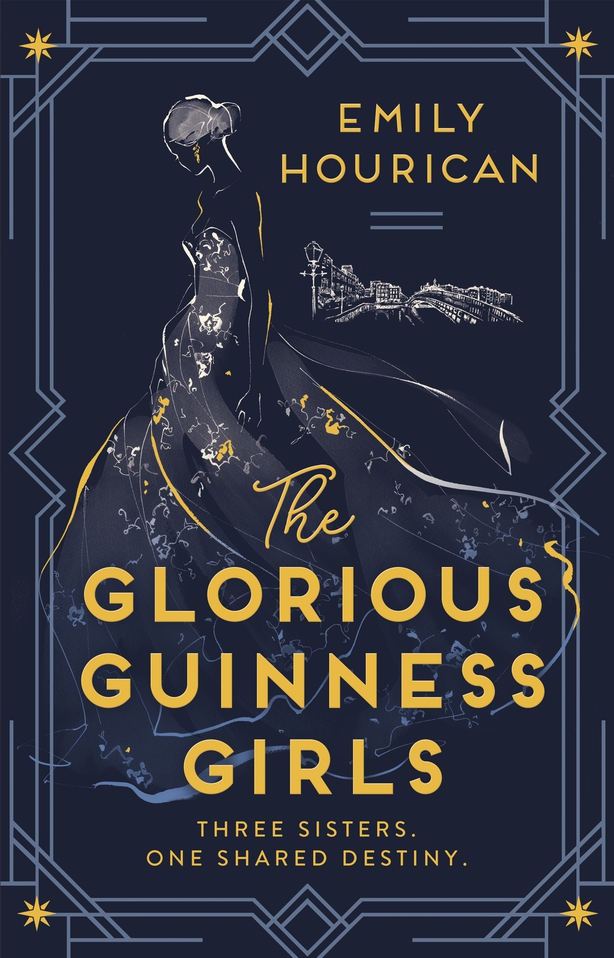 The Glorious Guinness Girls by Emily Hourican (published by Hachette Ireland) is out now. 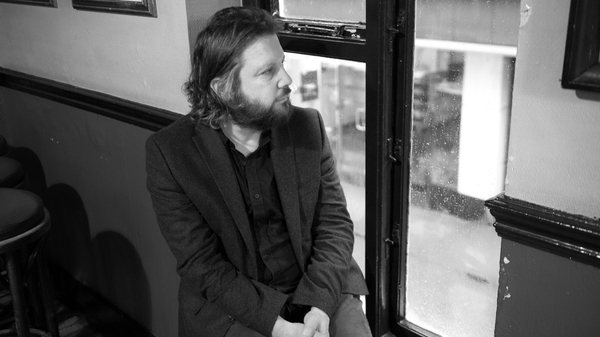 OK, Let's Do Your Stupid Idea by Patrick Freyne - read an extract