From the shortlist of ten for this year's RTÉ Short Story Competition, read The Brow of the Hill by Edel Moloney...

A myth springs up about a "mountainy, barefoot girl"...

The Brow of the Hill

It was the Feast of the hermit St Sabas, and snow was falling. My father left his house and walked down the hill to Mass. He was carrying my sister's coat and hat and he held them to him beneath his own heavy coat, both to keep them dry and to warm them for her. Her best boots were one in each pocket and his Sunday shoes were annoying him, because the snow had no respect for diligent polishing and because he had had a sleepless, worrisome night.

Close to the village were two cottages, side by side. My father went into the first of these, where he collected my three-year old sister, Rose, and he dressed her for the outdoors in her navy blue coat with the velvet collar and her matching hat and Mrs. Bolas chided him for forgetting to bring gloves for the girleen on such a chill day. She was busy with a wide-toothed comb and a bowl of water, readying her own clutch of boys for church and my father thanked her for minding Rose overnight and he gave each child a penny for the collection plate.

Mass was nearly over and everyone was respectfully praying in silence after receiving the holy sacrament, and the priest had closed up the tabernacle, when shouts and screeches could be heard from outside, coming closer with every call of Mr Nugent, Mr Nugent, MR NUGENT, and Dolly the live-in girl burst through the door and everyone turned to look at her, and my father stood up so that she could better find him in the congregation.

Dolly, in her terror and confusion, made the sign of the cross and said, Pater Noster, qui es in caelis, please excuse me, Father, but Mr Nugent is needed desperately at home and you after him, please, Father, and she curtsied and blessed herself again and her hands were shaking with cold and fright and everybody in the church sucked in their breath -- fwoooo -- as one, as though they were at the travelling circus, and my father looked at the priest, who hadn’t yet given his blessing and who was also his employer in a manner of speaking, as that was a time when he was still the schoolmaster and so to upset the Parish Priest had potential for repercussions on more than one front, but Fr Mulcahy just hastily blessed the air in the direction of my father and said, Hugh, go, for the love of God, and my father raced out of the church, forgetting about Rose, and he ran back up the hill, not caring now about his Sunday shoes and he burst through the kitchen and into the hall to find Mrs Conroy, the midwife, weeping bitterly on the stairs.

Snowy Sunday morning, 5th of December, 1886. I was born and my mother died.

I suppose it was to be expected that my sister, Rose, would never like me very much after such an introduction. She took against the Bolas boys, too; particularly disliking Casper who, on that dread Sunday, had chased her round and about with a terrifying albatross beak letter-clip that Mr Bolas had accepted in lieu of payment for poitín, back in the day when the Big House people could get away with such things and an albatross beak was better than nothing.

My father could have also hated me, because suddenly he was burning bed sheets and lighting candles and discovering that a wake gives permission to every undesirable in the parish to enter your house. All that effort to win his one true love brought to naught by my arrival. All that cycling high up the hill and far down the other side, week after week, and month after month. All that sniggering in the village to see him courting from out of a mountainy, barefoot family and the well-brought-up girls taking spiteful offence at his indifference. All that, and now fires smouldering in the churchyard to thaw the ground to hack out a grave, and a keening baby in a crib alongside its discarded cocoon.

My father chose not to hate me; he chose instead to love me all the more because I survived. Fr Mulcahy laboured up the hill to administer Extreme Unction to my mother and to baptise me at the same time, and my father remained true to the name that my mother would have chosen for me, and so I was christened Lavender Faith Nugent, and the village matrons at my mother’s bedside knelt to say their prayers and some of them took the opportunity to peep beneath the bedstead, to see how many pairs of shoes the mountainy, barefoot girl had when she died.

Dolly, the live-in girl, had to go, because the circumstances of her living alongside my father would have turned quickly from tragedy to scandal. My father offered to arrange for lodgings in the village but perhaps Dolly was unsettled by having been so close to death and life intermingling, as she chose instead to book passage for Boston and there she leaves our story, for that is all I know of her.

Mrs Bolas, however, had her own Mr Bolas and a great devotion to the Sacred Heart, all of which meant that the village nodded its approval as she made her way up and down from cottage to house and back again, with or without her own three little boys in tow. And it nodded again as my father journeyed from house to cottage, Rose at his side and me in a basket slung over his shoulder on the way down the hill; me in my basket and Rose in his arms on the way back up.

Balthazar Bolas, the youngest son, was just two months older than me and we were for a time fed at the same breast. That may be why Balthazar loved me especially and not as a sister, but why I loved him more like a brother than I did the other two boys. Of the others, Melchior’s gentleness meant that he found no easy belonging, and he drowned in the lake when he was seventeen. Casper I married; for better or worse, I truly do not know but when I look at my own daughter, I think I had no choice, my path was leading to you.

Our village lies in a valley, one undoubtedly shallow if placed alongside, say, the Kashmir Valley but one dourly steep-sided to those who daily trudge up and down the hill to church, or school, or mill. Most of the houses and shops line the Main Street. Calling it the Main Street places our claim to a little piece of the road that comes from the town and goes to everywhere else that is not here. There is a crossroads, and this is where cottages – and occasionally, houses – clamber up the hill on either side. The families on the left side hill are supposed superior to those on the right and I think this must be because left side livestock thrive in comparison to their right side cousins.

It is also true to say that the cottages are generally better kept and less ramshackle on the left but then if, on the right, the grass is not enough and the wind is too much for an animal, surely it is to be expected that the people and their dwellings will also suffer and, therefore, should not be judged?

Here on the left side hill, we have the stream running down to the mill and rushing beyond to find its lake. There, on the right side hill, they have the Chattering Acre, wherein lie the bodies of scores or more of the famine people: men, women and children; good neighbours and bad, all mixed in together. Sometimes, when the wind is hushed, you can hear them whispering to each other.

Back then, on both the left and right sides of the valley, people took comfort and found importance in belittling those who lived, like my mother in her youth, on the further slopes. Certainly, those who disappeared over the brow of the hill and down the other side were generally poorer and the older people unschooled, but I had mountainy blood in my veins and could not abide the jeers of the children and the condescension of the adults.

I have travelled a long route through the geography of our townland to tell you a simple fact. On the day of my mother’s death, Mrs Dunphy, a neighbour who lived further up the hill and who was not at Mass because she had a feverish child to mind, chanced to look from out her window, and there trotted a beautiful black calf, making steady and determined ground towards the brow of the hill.

Mrs Dunphy went to her gate and called to the calf, who stopped momentarily but then resumed her trot and continued up the road and out of sight. They say in the village that the calf was my mother, returning to her own people. And I – never having left the house I was born in, or the village that knows me from birth – I wondered, what is that pull of your own people? Your own place? Would I feel it, if I went from here? And why had we not become my mother’s own people?

I asked Mrs Bolas, my nurse, my nanny, my confidante before she came to hate me as my mother-in-law, and she said that a creature born wild can never be truly tamed; nature will out, she told me. And then she said, when the day is right, she’ll be back, child. She was trying to take you with her but it wasn’t your time, and she wasn’t let.

I fretted over that conversation until at last, my father asked what was troubling me and I was relieved to tell him what Mrs Bolas had said so matter-of-factly about my birth and my mother’s death. I said it word for word, learnt by heart through constant dread; days of frightened watching for that beautiful black calf to return over the brow of the hill to claim me and when I had finished, my father lit a cigarette and took his time to answer, as was his way, and then he said, this is not how I would judge it to be, Lavender. Your mother may not have become one of them – meaning the village women – but she was very much one of us; meaning our family. She didn’t choose to go, or to leave you and Rose; she chose to fight a hard battle to see you safely born. Here, in your own place, where I can look after you.

My father’s mind was wide and deep like the lake, and he knew that not understanding something didn’t make it untrue. Fifteen more summers and fourteen more winters I shared with him, and every December, on the feast of St Sabas, we braved the steep camber of our fields, to sit patiently awhile on the brow of the hill.

Edel Moloney is a mature student of Art History and Philosophy at UCD, currently on leave of absence.  She was a winner of the inaugural Irish Writers Centre Novel Fair in 2012.

The Brow of the Hill will be read on air by Derbhle Crotty. 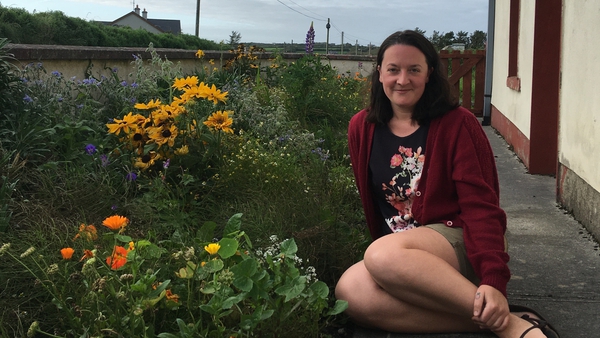