As part of this year's Bealtaine At Home festival (and funded by the Arts Council's Covid-19 Bursary Award), artist Andy Parsons invited people who were self-isolating to join him in a virtual portrait sitting - view a selection of the finished portraits above.

During these sessions, Andy created an artwork while getting to know each person and how they have responded to the unfolding crisis. In return for their time, the sitters received the artworks via the post. The portraits are also being exhibited in digital form on Age & Opportunity's Bealtaine Festival website.

Below, artist Andy Parsons writes for Culture about the project...

Portraiture has been part of my practice for many years, during the recent Covid19 crisis I realised I could use this format to not only make art, but also to reach out to a community which has been particularly effected by the isolation of the lockdown.

The project set out to use portraiture as a way of having a series of remote conversations with older people around the country, as part of the Bealtaine At Home initiative by Age & Opportunity.

Age & Opportunity reached out to people who were interested in exploring new ways of engaging with cultural life during the lockdown. The portraits were completed over zoom, usually in two or three hour-long sittings. Each sitting was informal and conversational, we chatted about all sorts of subjects, and built up a rapport. As the session progressed, I was fascinated not only in the conversations but also the fact that we grew comfortable with the process which resulted in quiet periods during the zoom calls. The portraits aim to evoke the sense of a person in mid-conversation and capture movement, energy and a sense of the time we are in.

The collaborative element of the making of a portrait h0000as fascinated me for some time, particularly in the six portraits I have completed since May. There are obvious visual restrictions caused by the use of Zoom, but these shortfalls have been more than compensated by the conversations that occurred between artist and sitter.

After each sitting, I photographed the work in progress to show the sitters how the work was evolving. The sitters also got to see the makeshift studio set-up in my front room, where I used the family TV so that I could look at the sitters on the biggest screen in the house.

The portraits themselves presented me with a number of technical challenges. The screen has a tendency to flatten things, so realising a three-dimensional form from only a digital image is challenging. Another challenge is self-imposed; since 2009 all of my work has been done from direct observation, with no recourse to photographic imagery. In choosing not to work from photographs in completing these portraits I made the time spent with sitters absolutely crucial to recording as much information as possible. The only elements in the paintings that have been outside of the sittings are the backgrounds, which often have simplified areas of colour, made up of thin semi-transparent glazes built up over several days.

In creating the portraits I felt it was important to make them good paintings as well as good likenesses. Often with portraiture, the search for a likeness supersedes the formal qualities that give paintings it's vitality, things like brushwork, texture and colour. So each portrait is an attempt to create a convincing likeness, make an interesting-looking painting, and most importantly, create a record of the interaction, capturing a moment in time.

After each portrait was completed I posted it off to the sitter, who could then decide what they would like to do with it and where to display it. The idea of giving away the paintings is central to the whole project – which sidesteps the usual structures of the art world and makes the recipients of each artwork the curator of the work as well as its subject and owner.

What happens next is also really important. Just as the paintings are a snapshot of a very specific moment in time, I am also fascinated by how they will become a part of their new owners lives now and in the future.

The project was organized with Age & Opportunity and was funded by the Arts Council Covid 19 Response Award. Andy will continue this project with Roscommon County Council, in conjunction with Donegal, Leitrim and Sligo County Councils, funded by Creative Ireland. 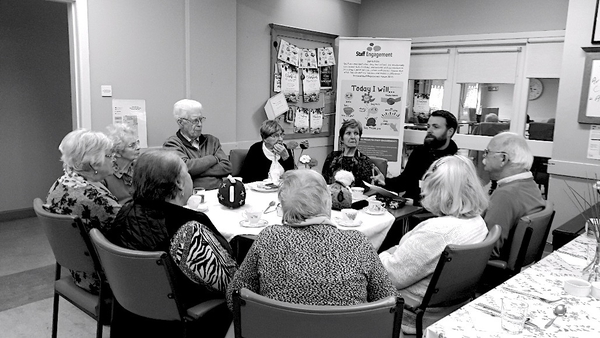