Filmmaker and Irish TV veteran Billy McGrath writes for Culture about his new documentary, Citizens Of Boomtown - which tells the story of Bob Geldof and The Boomtown Rats, with contributions from Bono, Sting and Sinead O'Connor - and his own rock n' roll journey to Bob and back...

In the early 1970's, I was a student in a very conservative block of concrete called UCD. To keep me sane, I acted with Dramsoc; wrote/performed live comedy and also played 1st team soccer for UCD AFC. In June 1975, after a modest BA and a teaching qualification, I was elected the first-ever full-time ENTS Officer in UCD’s Student Union. A month later, the tragic Miami Showband massacre shocked us all. Days later, every touring UK band cancelled their Irish dates and most of the shows booked into the UCD restaurant building were gone. We needed to find local bands to fill the gap.

During the summers I used to work in pea factories in Lincolnshire, and the year before a Bolton Street student named Gerry Cott shared the night shift with me. Every Saturday night he played amazing acoustic guitar in the White Horse pub in Spalding. So when I saw this new band The Boomtown Rats at the Cliff Castle Hotel in Dalkey, my eyes were on the greasy-haired guitarist with shades. Mr. Cott had gone electric. After post-gig greetings Gerry told Bob Geldof (first time we met) that I promoted the biggest rock gig in the city. His ears perked up and the salesman kicked in - and never stopped!

The Rats played support at the Freshers Ball in October plus I think headlined the Xmas Ball and the Rag Week Ball in ’76. By then, the band were 'hot’. But there was no rock music industry in Ireland. No Hot Press. No local A&R. No 2FM. No rock circuit.

In May ’76 Bob offered me a spare ticket for The Who & Little Feat open-air show in Swansea. On our way there and back on the ferry we expanded on his idea to break the showband stranglehold outside Dublin and organise a national tour with the Rats. A week later, I had moved into his shared house in Seapoint to co-organise The Falling Asunder Rock Revue - the first ever Irish tour of local rock bands. (PS - There’s a film script in that madcap adventure). We had one black phone between us, a contact in every town and somehow it worked. After playing something like 17 dates in 23 days (ending at a near sold-out National Stadium) the Rats had a rock-solid set and planned their escape.

Record contract in hand, the band went to London soon after, and I headed west to open up music venues in Limerick and Galway. That sparked a national circuit and that led me into a decade of managing bands, opening comedy clubs and running a music/comedy PR company. I even worked on the production side of the Thin Lizzy/Rats Dalymount show in ’77 and one band I managed, The Atrix, opened for The Rats on their massive 1981 UK tour. Always itchy feet, I returned to comedy (as Billy Magra); handled PR duties for U2 in Phoenix Park; Christy Moore, Moving Hearts; Jim Aiken and MCD promotions.

In May 1984 I was offered a 6 week UK tour opening for The Flying Pickets (as a comic) and a TV producer/director traineeship in RTÉ. I jumped at the latter. My first ever proper pay cheque! But Bob & The Rats were never far away. In ‘85, I studio directed the RTÉ side of Live Aid (with Declan Lowney) and the first film I directed was behind the scenes at the Self Aid concert of 1986, where the Rats played their final show. A David Bowie TV half-hour & a film centred on U2 at Croke Park followed. I left RTÉ in 1988 to direct a film with The Pogues and to join the international Channel 4 music series Wired. Back in Dublin, I directed videos for Harry’s Game and soccer anthem Put ‘Em Under Pressure plus two films with Clannad and the Irish International soccer team as they qualified with Big Jack for their first-ever World Cup. All with Windmill Lane. I spent a great year or so with Ireland’s new commercial channel TV3 in 1998; directed/wrote Make ‘Em Laugh (Gay Byrne’s first series after he left The Late Late) and in autumn 2000 was appointed RTE’s first ever Commissioning Editor of TV Entertainment. At the end of 2001, I saw Bob Geldof (with solo band) was a guest on the Late Late Show and much later, over a bottle of wine in the green room, now as fathers, we shared the battle scars of our personal lives. After that (thanks to mobile phones) we never lost touch.

The current Boomtown Rats film is one of my favourite career projects - and such a mad coincidence that the subject is the band that kick started it all. Citizens of Boomtown has it all - insightful stories, compelling archive, great guests and dramatic layers. You couldn't make it up...

The Rats decision to re-unite in 2013 also sparked me to settle my artistic differences with my ‘other half’ Billy Magra (Ireland’s first-ever alternative comedian!) and plot a return to the stage 30 years later. A new one-man show Gusto premieres in the Galway Town Hall Theatre on April 3rd. A new challenge, and the 3rd act beckons. Bob said he’ll come and heckle!

Billy McGrath's Citizens Of Boomtown is a two-part series on RTÉ One, screening on Thursday March 5th and Thursday the 12th at 10.15 pm - catch up afterward on RTÉ Player. 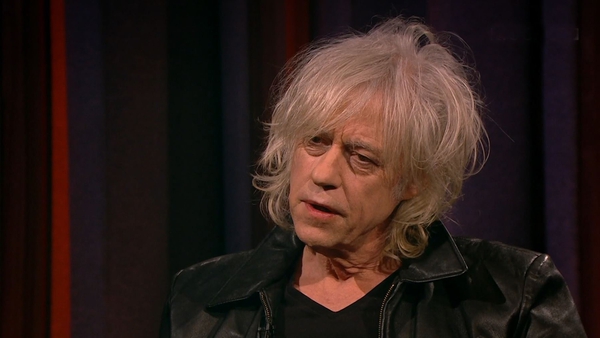