For the New Music Dublin Festival 2020, taking place in the National Concert Hall from Thursday 27th February to Sunday 1st March, Irish label Diatribe Records will release an astonishing seven new records on a dedicated stage over the course of the weekend.

For us, these kind of release phases help to create a sense of community amongst our artists and to highlight the ever-expanding diversity of our catalogue. Diatribe is a very broad church – when you bring together so many brilliant musicians from such different areas of music to the one stage (like our Éiriocht London festival back in 2018), this overwhelming feeling of togetherness starts to emerge – that something is really happening here...the scene has come to life!

Although our NMD release phase is certainly the biggest set of records that we have done to date, it is not the first time that we have created collections. In 2010 we released Solo Series I, which featured new solo recordings by Isabelle O'Connell, Izumi Kimura, Paul Roe and Simon Jermyn – closely followed in 2014 by Solo Series II featuring Kate Ellis, Caoimhín Ó Raghallaigh, Adrian Hart and Cora Venus Lunny. I still feel that the Solo Series records are amongst the jewels of the Diatribe catalogue – highly personal statements by some of Ireland’s leading artists. In a way they are like a wide-angle lens, offering a birds-eye view of the diverse landscape of contemporary Irish music.

This mirroring of a moment, capturing the sense of sonic freshness in the air, is the real driving force behind why we do what we do. There is so much ground-breaking new music coming out of Ireland at the moment, and we work really hard to document it in high fidelity and share it with a truly global audience.

The New Music Dublin collection will see us present seven releases across five unmissable concerts. For the opening night of the festival, a concert to launch what we think is the definitive recording of Morton Feldman’s For John Cage by two of the world’s leading interpreters of his music, Darragh Morgan & John Tilbury.

Friday night brings us Lina Andonovska’s electric late-night launch of A Way A Lone A Last, griddle-hot new music for flute and percussion featuring Matthew Jacobson and Claire Chase, whom The New York Times describes as "the most important flutist of our time". We’re really so honoured to be bringing Clare to Dublin for the first time - she is such a key figure in the new music world and has inspired so many composers and performers to expand their horizons beyond the known.

In musical meditation, Saturday afternoon features what is the word, an exploration of the work of Samuel Beckett by the hallowed Maya Homburger, Barry Guy and Benjamin Dwyer featuring actor Mark D’Aughton, followed by an unleashing of new cutting-edge improvised music with a triple-bill of artists from Ireland, France and the UK featuring BABs, ReDiviDeR and the Guillaume Orti / Stéphane Payen duo.

Find out more about the Diatribe Stage at New Music Dublin here. 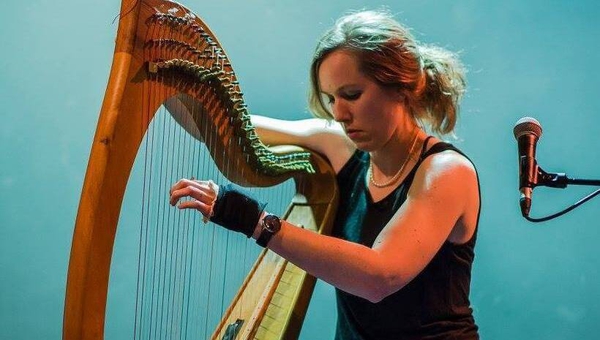