Carl Corcoran caught up with jazz trumpeter Airelle Besson in advance of her five-date Music Network tour this October.

The Oxford Dictionary describes conversation as 'a talk, especially an informal one, between two or more people, in which news and ideas are exchanged'. Other sources define it as an ‘interactive communication between two or more people’. That same description can equally apply to a musical interaction – perhaps best illustrated and materialised in the jazz format. French trumpeter Airelle Besson feels that this ‘conversational communication’ is a ‘particularité du jazz’ – one of the characteristics of jazz.

Besson’s collaborations through the years have investigated the curiosities of interplay with a wide range of musicians and combinations. She delights in the opportunities afforded her in the various sound-worlds she has occupied. Whether it’s the duo combination of trumpet and cello with fellow Frenchman Vincent Segal or the equally intriguing trumpet and accordion sounds with Lionel Suarez or perhaps the 2016 recorded sounds of her Radio One Quartet, the same honesty, sincerity and love of communication reaches out from my speakers and washes over the ears of this listener. ‘I try to be the same with everybody’ she answers when asked if there was any difference in her approach to the disparate combinations. ‘My ears guide me – I never want to show off technically’ but more crucial to this sensitive and generous musician is the ‘sharing of musicianship’ no matter who it’s with.

Perhaps she has noted the words of another great trumpeter – Miles Davis remarked ‘Don’t worry about playing a lot of notes. Just find one pretty one’.

My conversation with the charming M’selle Besson was on a stifling 40-degree day in July, where from her Bourges hotel room in Central France she chatted about her return to the performing stage after a year’s hiatus due to the arrival of her daughter Tina – whose six-month birthday was this very day. ‘It is magical and life-changing,’ she says of motherhood - and now that she has returned to live performances, that same ‘magic’ is expressed in her music as much as her words.

This multi-award-winning artist first expressed an interest in the trumpet at the remarkably early age of four. Her father had wanted her to play the harp – but nothing deterred the young Airelle from her desire to sound the trumpet. What inspired one so young to such an unusual instrument, particularly when female trumpeter role models were in short supply? Airelle puts it down to recordings of renowned classical trumpeter and pedagogue Maurice Andre played to her by her Grandfather. Clarion notes by such composers as Hummel, Telemann, Vivaldi and Leopold Mozart (father of the more famous Wolfgang) touched the ears and soul of this young Paris native who had to wait til her ‘adult teeth’ came in before she could attempt to learn about making sounds – before her lips could touch the mouthpiece to develop the required embouchure.

From that point on, Besson studied trumpet, violin, composition and harmony before pursuing Musicology at the Sorbonne University. Violin studies in Oxford were under the tutelage of Kato Havas – a disciple of Yehudi Menhuin. As a teenager she discovered jazz, (became a student at the Jazz Department of Le Conservatoire National Supérieur de Musicque et de Danse de Paris) but never at the expense of classical music. To this day, her favourite composer ‘of all time’ she remarks, is J.S. Bach. She’s not alone in that preference, of course. Jazz greats such as Bud Powell, Bill Evans, Brad Mehldau and indeed composer and multi-instrumentalist (including trumpet) Ornette Colman have all extolled the virtues of The Master, often regarding Bach’s music as a perfect ‘jumping-off point for improvisation’. ECM Records have recently released a live recording from 1987 of Keith Jarret’s performance of Bach’s Well Tempered Clavier Book 1. Coincidentally (or perhaps not) Jarret is one of Airelle’s favourite jazz musicians ‘of all time’, she says again, with an infectious laugh. When it comes to trumpet players – ‘it’s difficult’ she opines ‘there’s Miles [Davis], there’s Chet [Baker] but there is one who is special and that is American Tom Harrell. She recalls she has ‘been lucky to study with Wynton Marsalis’ but a few years ago at the Philharmonie de Paris: ‘I had the privilege of playing with Tom Harrell, sitting next to him it was…how you say, wow wow wow!’

Besson is among the highly lauded current crop of European jazz musicians. A female trumpeter is a rarity. While there are some such performers on the Continent, such as Dutch jazz trumpeter Saskia Laroo, or Spaniard Andrea Motis and in the States and Canada there are more like Ingrid Jensen and Bria Skonberg. But Besson believes she is one of the very few such practitioners in France. That will certainly not be the case in years to come. One of Airelle’s missions is to mentor and encourage young talent. ‘I have little children who come to my concerts – some young female trumpet players. I have little fans (laugh) – I write to them and keep in contact with them, to motivate them to continue. They tell me it is important for them to see a female trumpet player on stage’.

During the course of our afternoon conversation, I made reference to one description I had read to illustrate Airelle’s wide-ranging talents. ‘Master of All Trades, a Jack of none’ amply articulates her immense abilities. She has composed over a hundred and thirty pieces for ensembles from duo to symphonic orchestra. In 2016 she was commissioned by the festival 'Jazz Sous Les Pommiers' in Coutances, France to compose for a symphonic repertoire.The result was a composition for string orchestra, wind quintet, percussion jazz trio and soloists – one of whom was the French-based South Korean singer Youn Sun Nah. 2017 saw the European Broadcasting Union’s Euroradio Jazz Orchestra perform her compositions, under her artistic direction. Earlier this year, the Cinémathèque Française (the legendary French film organization that holds one of the largest archives of film documents and film-related objects in the world) as part of a retrospective of director Jean Renoir, screened the 1925 silent film La Fille de l’eau with a new score by Besson which featured Louis Sclavis on clarinets and Benjamin Moussay on piano. A commission by the London Jazz Festival/BBC Orchestra was sadly postponed last year due to her pregnancy hiatus. ‘That was sad’ she explained ‘but of course for a very good reason’.

Besson’s love of big band and brass sounds goes back to her time spent in the UK, when between the ages of 8 and 10 she attended primary school there – trips to the Orkney Islands, Wales and Oxford whetted her appetite for the ’brass band sound’ . This love of big band was further consolidated when she performed in Charlie Haden’s Liberation Orchestra with Carla Bley in 2006. And was further enhanced by her admiration for Maria Schneider and her Orchestra.

On this current Music Network Tour of Ireland, Airelle teams up with pianist Sebastian Sternal and drummer Jonas Burgwinkel, a trio that excites her to the core. Both Sternal and Burgwinkel are composers themselves and as a trio, a typical performance includes work by each. ‘Would you like to know where we met’ she asked with gleeful delight. ‘We met in 2013 when we toured in Germany with Ricardo del Fra (Chet Baker’s former bassist) and it was so special. Many wonderful things happened when we played every night for three weeks. I
invited them to play with me during my Residency in Coutances. It’s a special combination’. With no bass player in the trio, Besson is excited about the opportunities this gives the ensemble to ‘play differently’. ‘And I really like that’ she explains excitedly ‘each time we create something new. Jonas is a musical drummer – he plays so colourfully and creates many sounds on his drums - a percussive way of playing while Sebastien creates such beautiful harmonic pictures – so rich, so precious so refined’.

Jonas Burgwinkel is an outstanding drummer and educator. His current academic role is that of Professor of Jazz Drums at the Cologne University of Music and Dance. His unique approach to the kit and its use is much sought after, playing with many others including his own ‘Medusa Beats’ and Pablo Held Trio. His musical approach provides more than a percussive element and is, what Airelle describes as an important ‘harmonic’ component. Sebastian Sternal holds a professorship for jazz piano at Hochschule für Musik Mainz and teaches jazz theory at Hochschule für Musik Köln. His partnership with Burgwinkel extends to other collaborations including a trio with Larry Grenadier, and is equally in demand throughout the European jazz scene. Sternal and Burgwinkel are both as excited about this touring trio as is Besson. ‘I love Airelle as a musician – she really listens’ says Sternal. Burgwinkel agrees ‘I love her sound – she plays in a way – I don’t know anyone else who plays like that’.

Irish audiences can expect an exceptionally unique musical experience from this trio. The architecture of sound is spellbinding – three musicians listening intently to each other. Three musicians who enjoy playing together, but also ‘enjoy the humanity in each other – their openness’. Besson revels in the thought of each concert being different. ‘Yes, yes thank you for recognising that’. And what of the structure? I ask. Again with a laugh of delight, she answers ‘We kind of know how we start but sometimes we don’t know how we finish. But
some tunes are a little more open – if someone wants to go here, we say 'OK, let's go there – it is a conversation’.

William Temple, the early 20th century Church of England bishop and essayist, once wrote that ‘The first ingredient in conversation is truth, the next good sense, the third good humour, and the fourth wit’. The ‘musical conversation’ presented by the trio on this tour contains all these ingredients, with an added warmth, sincerity and in the words of Airelle herself ‘a few surprises’. 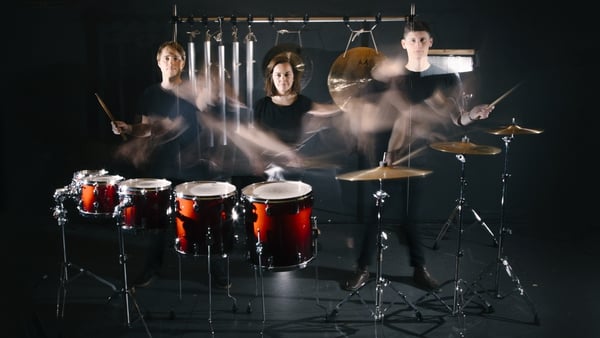