We're delighted to present an extract from A Letter Marked Personal, the final finished novel by JP Donleavy, completed in 2007 and posthumously published by Lilliput Press.

Nathan Johnson, forty-eight and restless, began his career as a door-to-door lingerie salesman, reaching the top of the rag trade with a penthouse overlooking Manhattan. A 'confirmed social climber' in 1990s New York City, he looks back on his early struggles, indulging fantasies of life as a country squire on Blueberry Hill – the Westchester estate he buys his wife Muriel as a birthday present. He meets a model from Iowa, different from the rest, and is captivated. When, out of the blue, a letter marked ‘personal’ arrives, his wife opens it and life unravels... J.P.Donleavy’s final novel delineates the American Dream, from aspirational greed to the vanity of human wishes. The poignant story of Nathan’s rise and demise speaks for the everyman – an apt farewell from one of literature’s true originals.

Open the newspaper, fold it over. Look up new locations in the ads. Each headlined. Perfect For Profit. If you listen out right now to the drone of traffic, sirens of police and fire engines, it sounds like a strange silence. A reminder that there's no god damn shortage of folk who this minute and second are at each others throats. And others who can’t take it anymore. Are taken away. Filling up Bellevue Psychiatric and the morgue where, tags on their toes, bodies wait to be claimed. Please don’t leave me because I’m dead. Revealing the truth of all those abandoned bodies unclaimed. A loneliness in death so great no loneliness is greater. While other hearts go on beating. While nothing stops. No time to catch your breath before something else begins. Like Iowa’s picture in the paper. Hearing once from Reginald who sitting there leaning back as he does in his big leather chair. Stacks of papers covering a big desk. Now executive vice president of the burgeoning Nathan Johnson Lingerie empire. Piles of internal revenue forms, a couple of squash racquets leaning up against the wall, his diplomas and citations. Went to an OK college. Phi Beta Kappa, and family portraits behind him on the wall. And apropos of nothing else at all, said it like it is. Because there was no doubt he long ago knew about Iowa.

'Nathan, I know the girls come and go on their way bettering their careers. But sometimes there’s one so outstanding one might like and can afford to take a temporary domestic detour. And I know you well enough not to suggest to be careful nor remind you of an unpretty picture but as you know, every guy in this city who’s met his wife downtown, or maybe they went to the same college, laid her, got her pregnant, got married and then is breaking his ass trying to make a living if not piling up a nice pretty little pile of money and ends up agreeing with her ladyship’s demand to move to the suburbs to the big house where she has in the sylvan surroundings three cars and a swimming pool, bicycles and computer games for the kids. And your nice reasonably successful guy commuting each day, and still struggling to pay for it all. Always knowing that hanging over his head like the Sword of Damocles is divorce. Then while wanting and needing a bit of praise and love in response to his business boasting, elbows on a bar, makes that fatal mistake. Convinces a doll he’s a big deal, unattached. Hi honey, I’m a film producer. They step out of a taxi, go to an hotel or her apartment. In a flash of two seconds, a friend of the wife spots them. As a supreme favour from the friend, the wife is told. Or a private dick already hired on the trail gives his report. The husband pleads it was an urgent business conference and he

missed the last train. Bam. He’s served with papers. Whamo. Supreme Court of the State of New York. Locks changed on all the property he thought he owned. Award plaintiff exclusive use and occupancy of the marital residence and its contents. Lunch hour at his job he may lose any second, he finds he’s out sitting in a non-conspicuous atrium. And he ain’t got enough concentration left to be able to scratch his head. He only feels a little better when he breaks down in tears.’

Although I kept tending to want to turn to see to whom Reginald was speaking standing behind me, one had to take on board Reginald’s austere warnings. Especially as they sounded as if they came straight from the horse’s mouth. He said such observations came across his bow more than he cared to count. And that’s what it was. Counting. The costs that could be bitter. He had just come back from the bad news of Iowa’s departure and her long message she left on his answering machine that he played over and over again and could remember her every word. And perhaps glad he should be that now Iowa had moved further out of his life. Because that life was your children. Your wife. And if you made a big bundle, a reliable companion into the retired luxury of old age.

But blot out such dreariness. Put the day’s newspaper up in front of your face. Before I take one more last look at Iowa. Hear a sound. A door opening and slamming shut. That could be Ida back from Brooklyn or even Muriel down from the country. Or with the sound of more doors opening it could be a burglar in this burglar-proof building, where all visitors must be announced and every door is monitored or watched. Sound of another door slamming. Christ whoever it is, is making plenty of noise. Someone in the kitchen. Something just smashed that sounds ceramic. Each door opened. Slammed closed. Christ what’s going on. Hold my seat on the throne. Footsteps fast down and along the hall. Could be somebody with a gun. While I’m in the middle of a bowel movement with the shiny brass doorknob turning in front of my eyes.

Nathan Johnson looking up over the newspaper. And past the headline. More millions of fraud in the twilight world of Wall Street. The glint and flash of the long blade of a kitchen carving knife. The sharp tip aimed arching through the air. Coming down. Remembering the moment I bought it. To last a lifetime. One of his first expensive purchases on Columbus Avenue when they lived over on the West Side of

town. Advertised as the knife edge so keen it cuts through the uncuttable. And right now goes slashing through page thirteen of the newspaper with a searing pain. The stainless steel blade sinking into his shoulder. Followed by a crumpled envelope and a page thrust through the air into his face.

‘Read that. A letter marked personal.’ 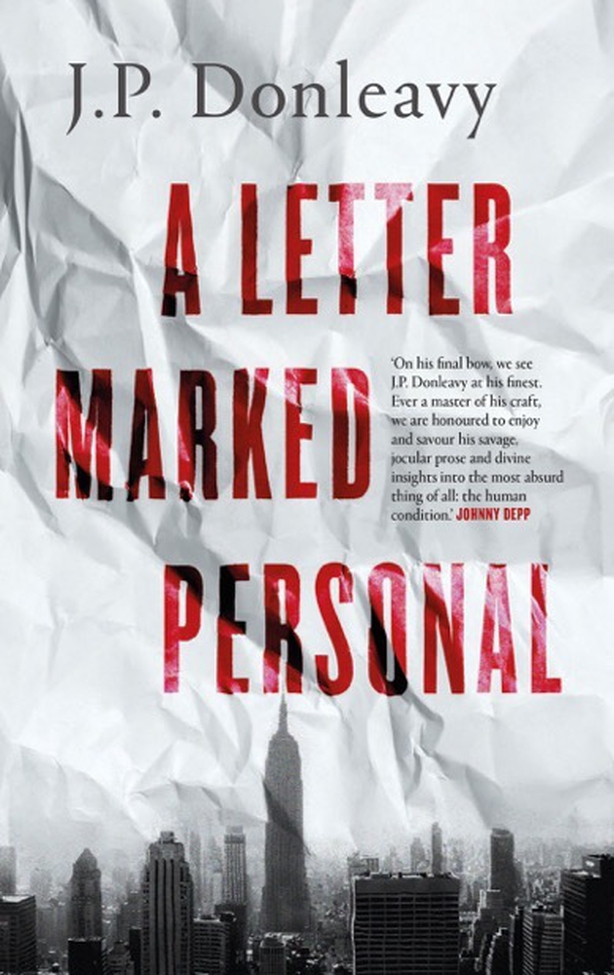 A Letter Marked Personal by JP Donleavy (published by Lilliput Press) is out now.