In Context 4 is an ongoing series of visual art projects in Dublin that deal with the subject of people and place. The next upcoming work is Nathan O'Donnell's The Mill, a bound booklet of images and text in response to the strikes in the 1980s at the Clondalkin paper mill.

Below, Nathan writes for Culture about the inspiration behind the project.

The first time I took part in a protest march was for Dublin Pride in 2000. I was sixteen. I don't know if I quite realised it was a protest march, at that point. I knew it was about being visible, about making ourselves present. But I don’t think I knew very much about protest at that point. I wasn’t really aware of Irish protest traditions. As for 'politics’, at that age the term was bound up for me with party politics, the old feuds and inherited enmities of the Irish politic system, and the suggestions of cronyism and parish-pump politicking that went with it. I thought of politics as something at a distance. To be honest, I thought politics were boring. Until I went to university, I don’t remember ever being taught otherwise.

In 2017, I was awarded one of five public art commissions through In Context 4 – In Our Time, South Dublin County Council’s public art programme. My idea was to run a participatory project in Clondalkin, working with young people to create a radical magazine that focused on protest and print culture. To do so, I proposed to look at contemporary Clondalkin through the lens of a particular local history, that of the Clondalkin Paper Mill Action Group.

The Action Group was formed in early 1982. At this time Clondalkin was a small, more-or-less rural village, about 15KM from Dublin. The paper mill was the town’s main employer; it had been there (with a few gaps in production) since the nineteenth century, and the village had been a centre for paper-making for more than a century before that. When the closure of the mill was announced, suddenly and unexpectedly, in late 1981, the people of the village simply refused to accept it. The workers stormed the gates and decided – with huge support in the village and also, later, nationally – to take matters into their own hands. 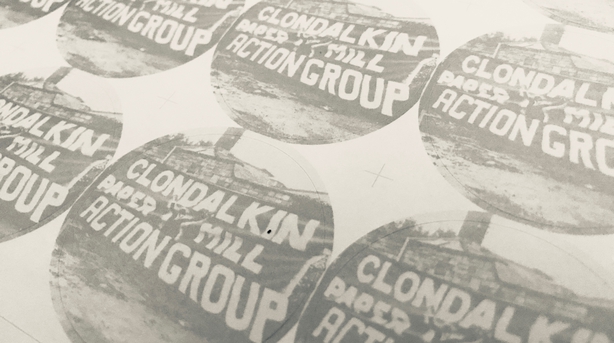 The Action Group was a model for activist organisation, drawing upon the resources of the whole community. They occupied the mill for almost two years, organising protests, marches, rallies, petitioning the government, and generating solidarity across the country with other protesting workers. The Clondalkin Paper Mill Action Group’s banner went up at GAA and soccer matches every week. They were all over the papers. In 1983 some of the workers went on hunger strike; after fifteen days the government relented, agreeing to re-open the mill. It was major news: one of the strikers and his wife were pictured kissing in triumph on the front page of the Irish Times. It was a proud moment for the village, but the mill’s days were numbered. It closed in 1987.

Young people today are so fluent with the language of protest. They are thinking about the climate, about housing and homelessness, about Direct Provision.

What happened in Clondalkin is not dissimilar to what happened in the mining villages in Britain; a whole village community was devastated. But we don’t memorialise it like they do in the North of England, for instance. There is no equivalent of the Durham Miners’ Gala, an annual event where the well-preserved protest banners of the 1980s are displayed and celebrated.

What I wanted to do with the public art project, entitled The Mill, was to see whether I could get young people engaged with this aspect of the area’s history. This was both a local history project and a youth project. Following a long period of research in the area, I spent six months working with students of Collinstown Park Community College in Neilstown – members of a writing group based in the school, called Inklinks – to explore the legacies of the mill protests.

The resonances were surprising. Young people today are so fluent with the language of protest. They are thinking about the climate, about housing and homelessness, about Direct Provision. They are involved in the climate strikes. They march annually for Pride. They have grown up with progressive protest movements going on around them: Marriage Equality, Repeal the Eighth. There were no shortage of protests and marches and rallies going on even as the workshops were taking place. So we talked about those, about protest, politics, social change, labour rights, and the role of journalism, particularly local journalism.

I told them about the Action Group of the 1980s and we imagined ourselves forming an Action Group for today, what we would like to see change. We talked a lot about the difficulties they face and the realities of life in Neilstown. We also came up with content for the magazine, working on ideas together and gathering material we wanted to include.

The magazine we produced, This Being Where We Live, is full of the creative work of the students – poetry, photography, short hybrid pieces of writing, manifestos – arranged alongside archival materials relating to the strikes and occupations of the 1980s. Launched during the Clondalkin Festival, the magazine is a reflection of a particular place – Clondalkin – and also a set of ideas about the future, about protest and print culture and paper-making. Ultimately the goal of this kind of work is to encourage young people to think politically. For me that means thinking about where and how we live, how we share resources, how we conceive of a common interest. These workshops were designed to get the group thinking collectively about the kind of future we want, and how we’re going to build it.

Find out more about In Context 4 and Nathan O'Connell's The Mill here.