We're delighted to present an extract from Her Kind, the new novel from Niamh Boyce, a vivid re-imagining of the events leading up to the Kilkenny Witch Trial of 1324.

A woman seeks refuge for herself and her daughter in the household of a childhood friend. The friend, Alice Kytler, gives her former companion a new name, Petronelle, a job as a servant, and warns her to hide their old connection. Before long, Petronelle comes to understand that in the city pride, greed and envy are as dangerous as the wolves that prowl the savage countryside. And she realizes that Alice's household is no place of safety...

We were almost three weeks in Kytler’s, when Dame Alice summoned me to her chamber. I opened the heavy door to find her perched on a canopied bed, her pale hair fluffed like a dandelion clock. One side of the room was strewn with Roger’s high boots, cloaks, furs, poulaines and damp hose. The other side was tidy except for the large desk in the corner, which was laden with scales, weights, scrolls, loose parchments, inks and quills. Alice smiled, showing tiny sharp teeth, and beckoned me closer. The bed cover was embroidered with gold-and-red branches swirling around tiny bluebirds.

I sat waiting for instructions, but Alice said that all she required was company and folded her hands on her lap. I looked at her bright rings, the mauve veins beneath her pale skin. One fingertip was stained black from ink. I felt, as I stared, that this, whatever it was, had happened before. I had seen it all – the neatly stitched bluebirds, her jewelled ink-stained fingers – once before. The dame, noticing how I stared, thought I liked her rings and began to list the precious stones.

‘Garnet, amethyst, ruby, pearl . . . I earned these, every one. You must not think my father sailed from Flanders with caskets of finery. It was hard work, some luck, but mostly hard work that brought our family wealth. Jose taught me to write but, more importantly, to stay alert, be watchful, and let no opportunity pass. "Do not rest," he always said; "you can rest in your grave."’

Though Alice kept busy, her work was far from hard. The servants claimed Jose Kytler left Flanders in a ship so laden it had almost sunk. Maybe both tales were true – I didn’t really care. The dame leant forward and gently tugged a lock free from my cap. She peered closely but didn’t mention the colour like most would.

‘I might even teach you your letters, what say you? Yes, perhaps I will.’

She placed her hand over mine then – it was dry as parchment. I wanted to take mine away, but I didn’t dare. Dame Kytler seemed to be thinking, or maybe she was drifting off .

After a while, she spoke about her physician, a learned man. He might visit sometime – might he ‘examine’ me? I shook my head. I’d had my throat blessed, tied with red ribbon, anointed in fat. It made no difference. Her doctor couldn’t help me speak, for I no longer wanted to. Most people didn’t like the silence that followed their words to me. After a while they didn’t even see me any more – people like Lucia Hatton and Alice’s husband, Roger. Even my mother had stopped urging me to speak, but she had always preferred quiet to clamour.

When Alice dismissed me, I slipped from the house and wandered the town. The Hightown Gates were shut, though it was not yet curfew. The keeper eyed me sourly

from the turret, the armour on his chest glinting. The gate was gridded and barbed. A gaunt, bearded man stood upon a dunghill, tugging a carcass from the mess. With much swearing, he wrenched up a ribcage that might’ve once belonged to a deer. I followed as he carried it down through Hightown and towards Watergate.

The keeper waved him through the gate. ‘Show me your wares?’ he jested, as I approached. He knew I’d no wares and no business there, but he seemed less strict than the keeper who guarded Hightown. On Sunday, he had just left the gates open, perched on his window ledge, and saluted the prettiest girls making their way to Saint Canice’s. I passed over the low bridge, a few steps behind the man and the carcass. I had to run to keep up. He didn’t climb the steep steps to the cathedral, but turned o on to Dean Street and ducked down a muck lane, where he entered a lone hut.

The door was open, so I peered in. The man glanced up; he didn’t seem annoyed so I sidled in and leant against the wall. He said he was a comb-maker, and his name was Fiachra. Had he not such a hooked nose, he would’ve been handsome. He dumped the carcass into a steaming cauldron and added more turf to the fire beneath.

There were tools and blades on a table. Baskets lined the room: they were filled with cleaned bones, some smoothed into shapes, some already turned into loom weights, knife handles, dye stones or beads. I sat on the ground; it was covered in bone dust, so I drew with my finger. The clay beneath was red. I drew a moon. I drew a bird. A small bird like the one on Alice’s bedcover. A bird of earth and bone.

The comb-maker stood over his table and fixed a pale disc into a clamp. He began to saw teeth into it, one by one.

He spoke as if to an apprentice but didn’t look for answers. His tunic was stuck to his back with sweat. He pulled it over his head and hung it on a nail. A line of fur ran from his belt up to his navel; a pendant hung around his neck. A wolf’s tooth. I rose to my feet. He lifted it to his mouth and kissed it. ‘For luck and a long life,’ he said, and something else, but I didn’t hear, for I left as quickly as my feet could carry me. 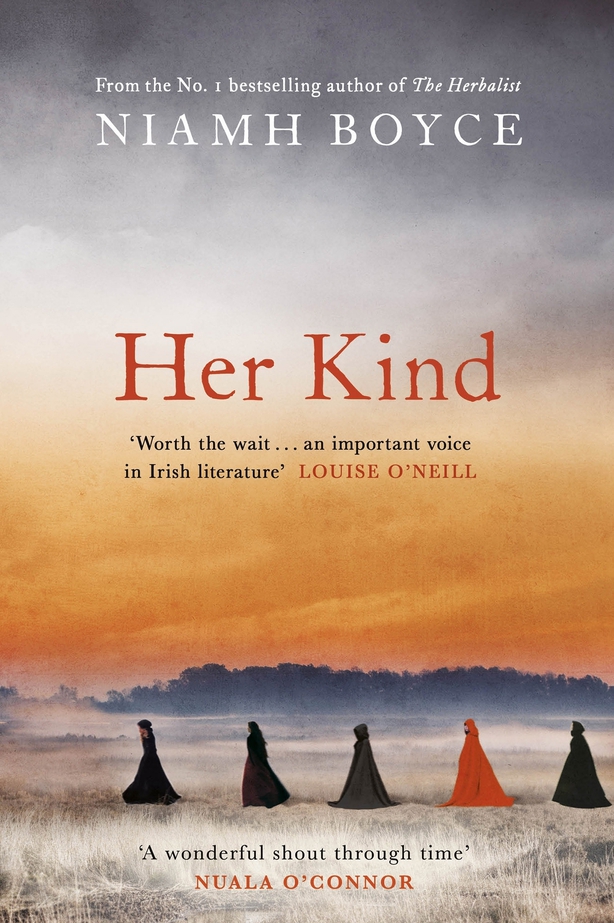 Her Kind by Niamh Boyce (Published by Penguin Ireland) is out now.