One line wonder Demetri Martin returns to Dublin on Sunday, April 14th to bring his one-man show Wandering Mind to Vicar Street. We caught up with the stand-up comedian to discuss his upbringing, his thriving career, and his appreciation for validation.

Growing up in a Greek-American household - with a Greek Orthodox priest for a father - Demetri Martin grew up believing he was destined for a respectable, straight-laced, career and a comfortable, if not predictable, life in his home state of New Jersey.

"Where I grew up is very close to where the television show Jersey Shore took place," sighs a resigned Demetri. "That show was a bit of PTSD for me because I didn't realise how much I had blocked out of where I come from," he deadpanned.

"I had no relatives that did anything creative, nobody played instruments, there were no writers or actors. We did Greek folk dancing at church events, so I guess there was some dancing, but I didn't have any grown-ups around who I saw doing creative jobs that looked possible for me," he explained. "I had my sights set on law school pretty early on."

Those sights were set high but, as it turned out, he was more than capable of the challenge. Martin was accepted to Harvard Law School but turned it down so as to take a full ride to New York University’s Law School, a building that was conveniently located right by the legendary Comedy Cellar.

You can imagine which door appealed to him most.

Of course, comedy was already in his blood - in a sense. As an altar boy, he would spend every weekend watching his father "essentially perform live comedy" while delivering sermons at church - which he believes inspired his approach to stand-up.

"I got to see him do a twenty-minute set every Sunday for that crowd, and he didn't have any notes. He was just a really good public speaker, so maybe that made it seem possible to me."

"My father loved watching comedy," he continued. "He loved George Carlin and Bill Cosby - which people don't reference anymore for obvious reasons, but at that time [he was popular] - and Peter Sellers. He was a big deal in my house. There were things I was exposed to because my father was a comedy fan, so maybe that planted a seed."

Having grown up watching typical brick wall comedy of the 1980s, how did Martin find the style of whip-smart one-liners that led to a Perrier Award at the International Fringe Festival in Edinburgh, an Australia’s Barry Award at the Melbourne International Comedy Festival, three stand-up comedy albums and four hour-long standup comedy specials, including his latest for Netflix, The Overthinker?

"Steven Wright," answers Martin. "I saw Steven Wright and it was the first time I thought 'I can't predict where this guy is going' and it would seem so lean and creative and different.

"With a lot of other comedians, you can start to predict the punch line but with Steven Wright, it was a really different game."

Soon after establishing himself as a stand-up, Demetri explored numerous creative avenues including drawing, writing and acting; he worked as a staff writer for Late Night with Conan O’Brien, became a regular performer on The Daily Show with Jon Stewart, and created and starred in his own television series called Important Things with Demetri Martin before writing and directing his first feature film, Dean.

Despite this incredible list of accomplishments, the comedian insists that he still can't understand how his introverted mind has married with the entertainment industry.

"I don't know if it's a struggle, but it's an ongoing challenge. The longer I'm in the business and the more I'm around comedians, I can see how different we all are," he explains.

"A lot of the comics I know thrive on the energy they get from the crowd and live shows. I really enjoy it but I think I'm more drawn to figuring out the material. I really appreciate the validation I get when it's working, but I don't know if I get that high the way other folks do."

"I do think I'm more on the serious end of the scale," he continues. "But realising that and accepting that was more of a relief, because I'm not a 'life of the party' guy, I've always been a bit more introverted and analytical. I'm not shy but I spend a lot of time in my head, for better or worse." 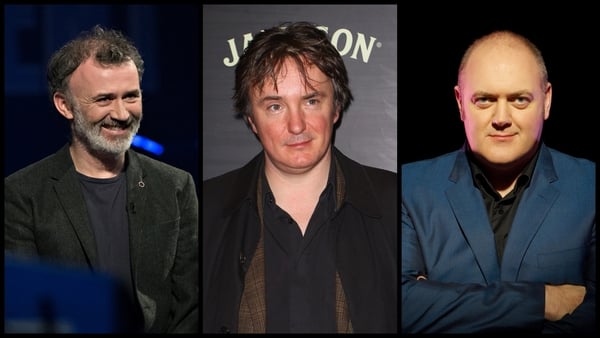