In late 2018, the Project Art Centre's gallery was transformed into a workspace where documents related to the Project's archives were studied and shared - the result is The Long Goodbye, the first of three chapters exploring Project’s rich 50+ year history...

Valerie Connor, curator of the Project's Off Site visual arts programme in 1998 and 1999, writes for Culture about this fascinating archival endeavour...

In the two years between Project Arts Centre moving out of its old building and into its current one at the same address, the visual arts continued as the Off Site programme. Ten projects were produced between 1998 and 1999. These were largely located at sites in Dublin city centre, with the exception of one in Salthill, Galway, one on Project’s website, an audio CD, and an interactive CD-ROM.

Chronologically, the programme comprised new commissions by Tony Patrickson, Pete Smithson, Sandra Johnston and work–seth/tallentire in 1998, and Paddy Jolley, Tina O’Connell, Dorothy Cross, Fergus Kelly, Ronan McCrea and Daniel Jewesbury in 1999. When I took up my post as Visual Arts Director at Project, Maurice O’Connell was preparing the finale of his artist’s residency. Demolishing Project – Maurice’s fortnight of improvised, ad hoc, spontaneous, open-house events – marked the arts centre’s goodbye to the old building, which closed on St Valentine’s Day 1998. A period of four months followed. We had to figure out not only how to do the commissions, but also how to think about them in relation to Project’s sense of itself on the eve of major change. The theatre and performance programme had been relocated to temporary premises over the river on Henry Place, and the visual arts programme was going to be a peripatetic thing, temporarily installed in many places, either virtual or actual.

Fiach Mac Conghail had become the Director of Project in 1993 and began working on the certainty that the arts centre had to change its material circumstances given that the existing building was becoming impossible to maintain. The change included a possible relocation. Project’s fortunes, like its neighbours, had been irrevocably affected by an area redevelopment plan incentivised by central government. Under the guise of securing assets in the hands of grassroots cultural organisations with their own communities and networks, a quango was established whose remit included negotiating with the arts spaces in the area. In the end, Project opted to stay at its East Essex Street address, increasing its footprint on the street and in the city by including an adjacent site in the redevelopment of the building. In the two-year interval between old and new, what would the arts centre learn about working differently that would consolidate its paradigm of risk-taking and artist driven programming as well as shape it operationally? This was explicitly discussed amongst ourselves and is why the publicity material at the time describes the projects in the Off Site programme as research driven.

Until Lívia Páldi enquired about what archival material I had from the late 1990s at Project, I had not had a reason to look so closely, or for that much time, at what can be seen in the background and shadows of photographs I took in 1998 and 1999 that are connected to the Off Site programme. The photographs were taken during recces to locations I made with the artists and my colleagues running the technical crew. I made them as a form of note-taking and they record some of the more incidental moments during the procedural work of getting in or out of an event or installation location. Other photographs taken before screenings show the monitor and projector menu settings rather than the artwork. Over twenty years, some of the 35mm slides that are listed on the paper documentation attached to them are no longer in the accompanying holders: those archival photographs remain as images only in memory, last seen before being sent away for use in a presentational or publishing context. I have worked with what remains, looking at 35mm negatives, contact sheets and slides, which have been held to the light, laid on a lightbox, loaded into a projector, and finally scanned. The archival context of Active Archive – Slow Institution has absolutely affected how I have been looking at these photographs as documentation. Certain taxonomies of objects and ideas emerge very quickly. I appear to have been very interested in lights, lighting fixtures, steps, staircases, doors, doorways, and door handles. Of course, these were the types of places where people were going to come and go to see the artists’ works and so they were important for my colleagues working front of house.

It is a familiar phenomenon that things recorded inadvertently in a photograph may come into visibility later because the conditions and context for looking at the photograph have changed. In this instance, I have been looking for the city of the late-1990s as it was recorded in the background and into the shadows of the darker images. The archives kept at Project Arts Centre and held about Project Arts Centre at the National Library of Ireland include a lot of information about the Off Site projects. It might take time, but it is accessible. In contrast, there has been no account made of the Off Site programme, as such. My contribution to The Long Goodbye aims to describe our experiment to re-imagine what makes an arts centre. From a curatorial standpoint, my perspective is grounded in my experience of programming at Project Arts Centre through the era nicknamed the Celtic Tiger and from the viewpoint of having now worked in the arts through the austerity that followed the banking collapse and economic crisis of the late 2000s and its ongoing effects.

It is a familiar phenomenon that things recorded inadvertently in a photograph may come into visibility later because the conditions and context for looking at the photograph have changed.

As I started to talk with Lívia about the Off Site programme, one of the buildings where an Off Site project was presented in 1998 – a hotel – was demolished. It had ceased business during the financial crises and repossessions that involved property developers in the late 2000s. This sharpened my attention on the status of two other buildings where artworks were sited during the Off Site programme: a 19th Century second-hand clothes and fish market and a pub. Coincidentally, the buildings are at either end of the same street. They have been extensively fire or water damaged and are maintained only for the basic safety of passers-by. In the case of other buildings featured in the Off Site programme, new ones with different functions and types of occupants have replaced them and some areas are barely recognizable. When I asked Miriam O’Connor if she would be interested in photographing the places where the projects on the Off Site programme were presented, it was because her type of attention to place and methodology feels so aligned with those that were present in the commissions from 1998 and 1999. This has been very important for me, because it has been vital that the purpose of looking back has to be to talk about concerns that have currency and relevance now. Miriam’s observations and investigations have done this to create the conditions for others to make a place for conversation, much as Maurice O’Connell described how he saw the work of the artist.

I would like to suggest that we can look at all the photographs seen in this public art space as public images, for as long as they are exchanged and discussed. They are deeply relational catalysts for the curatorial context set out by Active Archive – Slow Institution. Their public-ness is linked to Project Arts Centre’s own public-ness, and the arts centre’s visibility in relation to the urgencies of contemporary life. Like everything else present in the gallery until the end of March 2019, all these photographs will soon enough return to storage or go on to circulate in other ways and places. Meanwhile, the slow burn of looking at the images that I have reacquainted myself with during The Long Goodbye will continue. 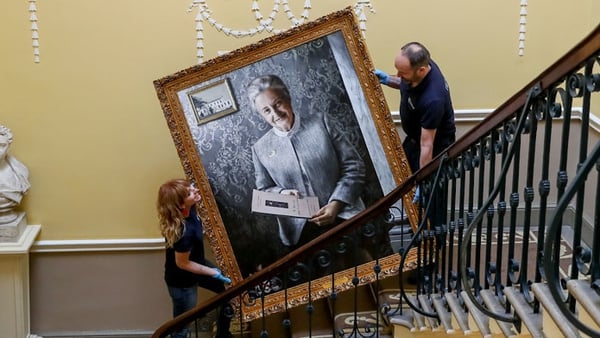