For the season that's in it, read a very special Christmas tale from comedian and author Karl MacDermott, whose collection Juggling With Turnips was one of our favourite reads of 2018.

In Joseph's Christmas Diary, Karl offers his own unique spin on a Christmas classic...

(In the archaeological discovery of the year, Joseph the Carpenter’s diaries have recently been unearthed. Here we examine his account of that very first Christmas and find a written testimony that at times gives us a surprising insight into this neglected biblical figure.)

Things are quite tense with M. at the moment. We got into a blazing row after our pre-natal class. She asked me had I booked the accommodation for Bethlehem. I said yes. This was a lie. I was meant to tell the shepherd Shobal, the son of Ezer, who recently begat Azariah, to tell his brother Pharaz who runs The Room At The Inn Quality Budget Lodgings in Bethlehem to set something aside for us. But I forgot. There shouldn’t be any problem though. I mean, it is a one-horse town in the back of beyond. It’s just that I’d hate for M. to end up in the middle of nowhere having to give birth in some stable or something, but that’s just my worried mind working overtime again. We’ll be fine. Fingers crossed.

Arrived in Bethlehem. Finally. The roads were crazy the last hour, a donkey tailback all the way from Anathoth. To my eternal relief, there was one unoccupied room at The Room At The Inn. But M. wanted to look at it first. She wasn’t impressed with it at all. Okay, there was that stale smell, and the mattress had seen better days and the towels weren’t that fresh, but it didn’t bother me that much. I guess because I’m a man and men don’t notice these things. Well, that’s what M. always claims, anyway. "Let’s take it!" I said, but M. disagreed. "No, we’ll get something better somewhere else." That was three hours ago.

Have finally found the "something better somewhere else." To be honest, it’s not perfect. In fact, my worst nightmare has come true: we have ended up in the middle of nowhere in some stable. I was going to launch into a long tirade about M. never taking my advice and that we should have stayed in The Room At The Inn but I felt it wasn’t the right moment, with her waters having just broken. What do I do now?

I am a father. I can’t remember much about the birth because I passed out during M.’s prolonged contractions. I’m gobsmacked that little old me, Joseph the Carpenter, is responsible for bringing this tiny creature into this world. Well, sort of responsible. I’m still not completely clear in my mind about the exact sequence of events all those months ago, and who exactly did what with my wife — and how — but I’m prepared to put all that to one side because this is a momentous day.

Felt a bit cooped up in the stable, so I went for a walk around Bethlehem. When I returned home, I noticed some loaves and fishes in the corner. I asked M. where she got them and she swore she didn’t know. She told me she dropped off to sleep for a few minutes and when she awoke there they were. Later had a most satisfying meal. Must be something in the water ’round these parts, for it tasted just like wine.

New Year’s Eve. Can’t get to sleep with all the parties and revellers. It’s louder than feeding time on Noah’s Ark. We decide to have a quiet night in this year, having difficulty organizing a babysitter at such short notice. Anyway, M. said she didn’t have anything nice to wear. Last year she spent hours getting ready. And then on her way out she turned to me and said, "I hate myself in this crimson tunic. I look so fat!" Later we spent a rather strained evening with our friends Joachim and Jezabethum. Joachim is in the recycling business. He tells me recycled crucifixes are the future.

I was in the middle of changing my first nappy this afternoon, when a voice said "Hello." I turned around and saw these three old guys just standing there with bags of stuff. From the word go, I didn’t trust them. In life you always have to go with your initial instincts.

They then told me they were the Three Wise Men.

I called out to M. in a slightly sarcastic manner:

"Come here! I want you to meet the Three Wise Men. Not just ordinary men, mind you, but wise men."

Then I really began to have fun with them.

"Well, we’re the Two Tired Parents! What do you want?"

Then they started going on about the baby as they removed the stuff from the bags.

"We want to give you this."

They showed me some gold, frankincense and myrrh.

Then they just turned around and left.

M. and myself looked at each other.

Something definitely not kosher about all this. Three old guys turn up out of the blue, and they want to give us stuff? M., being more naturally suspicious and paranoid in nature than me, came up with an angle.

"Maybe they are highway robbers," she said. "I mean those beards look like a joke, for starters. Maybe the authorities are after them and they’re trying to dump the stuff somewhere, and later on they’ll want to come back and cut our throats and retrieve it."

She could be onto something. Then M. wondered: what happens in the meantime if we’re found with the stuff? We’d be flogged, stoned, put away for years, and the kid would have to be taken in by social services. Where would that leave us all? And the future of Christianity? Without further discussion, we immediately disposed of the boodle in a well down the road. I’d never seen such fake looking merchandise anyway!

Juggling With Turnips (Eyewear Publishing) by Karl MacDermott is out now - read an extract here. 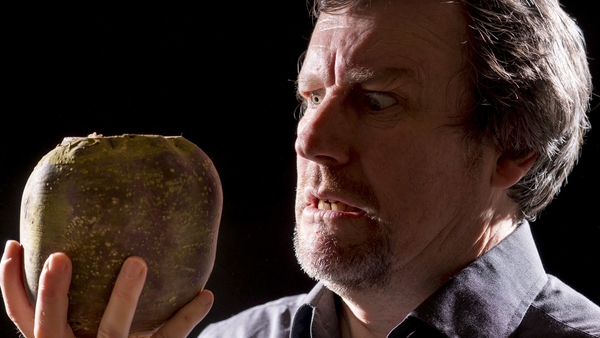