A Brilliant Void, which has just been published by Tramp Press, gathers a selection of classic Irish Science Fiction.

Editor Jack Fennell has given Culture this extract from the story The Chronotron by Tarlach Ó hUid (1946). In this piece, Professor Ó Néill takes the narrator on a trip into the past in his time machine, and reveals his plan to prevent the Civil War.

It was a quiet night, and the light of the Moon shone down on Loch Neagh. We embarked.

"I’m afraid you’ll have to sit on the floor," the Professor said. "We’re going to be packed in like herring in a barrel. Colonel, 1920!"

The Colonel started fiddling with levers, buttons and the throttle. I heard a low humming that only lasted for the blink of an eye, a shock went through me, and I felt the Chronotron pulsing beneath me, as if it were alive. I looked out the porthole. There was no starlight to be seen anymore; there was nothing to see but pitch darkness. The pulsing stopped, and my eyes were suddenly blinded by sunlight streaming in through the porthole.

The Professor spoke with an impatient tone. "It’s close enough," he said.

I let out a croak of astonishment. "We’re in the same place that we were before, but now it’s day! I can see Loch Neagh over yonder!"

The Colonel pushed another button, and the Chronotron rose from the ground with the speed of a bullet. It took me by surprise and laid me flat on my back.

"The Chronotron isn’t exactly how I’d like it to be," the Professor said, levelly, "but it will improve once it is able to move through Space and Time in the same go. As it stands, it will take us ten minutes to reach London. I should explain to you why I’m going there. Here’s a question for you, Seosamh – in your opinion, which event from Irish history is most to blame for the hideous state of the country today?"

I thought about it for a second.

"The Coming of the Normans," I said, "or the Famine, maybe, or the legacy of the Civil War."

"Exactly! Now, I’m not confident enough in the Chronotron to go all the way back to the time of the Normans, and I don’t yet know how I would go about erasing the Famine, but I think I can save Ireland from the Civil War."

He grabbed me by the shoulders, and there was a strange glow in his eyes.

"It isn’t blathering at all. Imagine it, Seosamh – if it were possible to wipe London off the face of the Earth in 1920, along with the British government, the monarchy, the docks and the armouries. The IRA would win the day. We have the means to do it – with an atomic bomb! Isn’t it a striking image? Hiroshima in ’45, and the capital city of England twenty years before that!"

I knew then that I was dealing with the worst kind of maniac, and that he would do exactly as he said. Overcome with horror, I tried to calm him down.

"Don’t do it, Professor! It’s not right to oppose God’s will! What’s done is done. And think of the millions of innocent English—"

The Professor gave a wry smile. "Innocent English!" he said, mockingly. "There’s no such thing!"

My mouth was dry, and my heart was turning over with fear and revulsion.

"Does—does the Colonel know what we’re involving him in?"

"I don’t think he’d care that much. He’s an engineer, and his expertise is limited to engines. He doesn’t have an imagination. He’s really only an engine himself."

The Colonel stuck his head back. "London," he said, all relaxed.

The Professor scrambled up beside him and examined the measuring and telemetry instruments.

"Another few degrees north, Colonel," he said, "to avoid the Thames."

The Professor took a tiny little bomb out of the back, and a small trap-door opened in the floor of the Chronotron.

"Now, Colonel, rise a couple of hundred feet, and as soon as this explodes—back to Ireland as fast as the wind!"

"Ready!" said the Professor, and the little bomb dropped out of sight. The Professor pulled the trap-door shut. I shut my eyes and covered my ears with my palms… 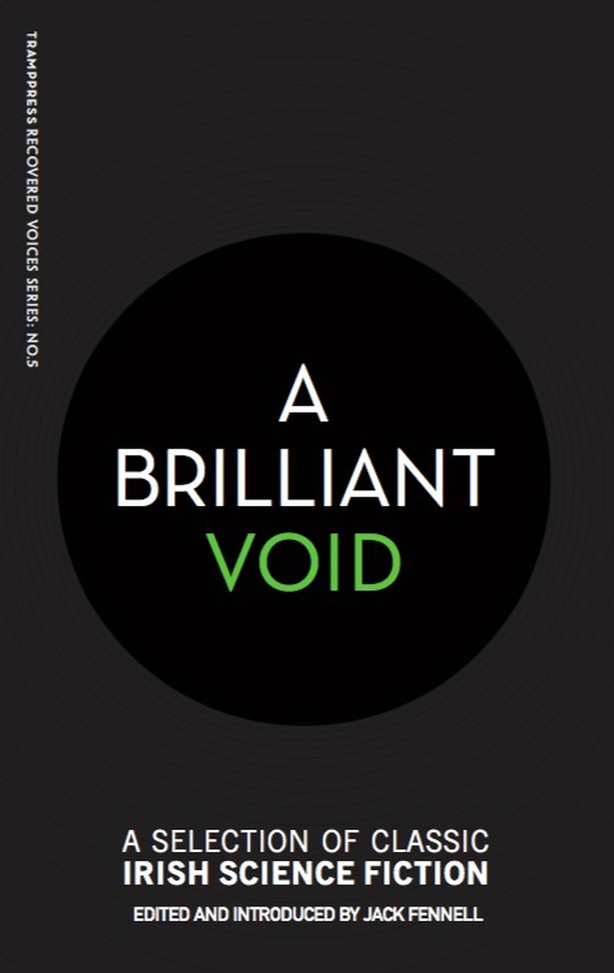 Jack Fennell is the editor of the new anthology A Brilliant Void: A Selection of Classic Irish Science Fiction, published by Tramp Press.