In 2018, RTÉ Radio 1 commissioned a new song to celebrate the lives of women in Ireland and, in this landmark year for women’s rights, to honour the lived experiences of our Irish foremothers.

The idea for this collaborative project was three-dimensional. Poet Annemarie Ní Churreáin was commissioned to write the lyrics, the group Landless was invited to adapt the poem to music and filmmaker Tadhg O’Sullivan was asked to interpret the work on film - the resulting collaboration was premiered at this year's RTÉ Radio 1 Irish Folk Awards.

For the text, poet Annemarie Ní Churreáin revisited the pre-Christian stories associated with Brigid, commonly known in Ireland as a triple Goddess of poetry, healing and smithcraft. It is said that when Brigid’s outlawed son Ruadán died in battle, Brigid began to keen and this was the first time ever that keening was heard in this country. Despite her many reincarnations in Irish culture and beyond, Brigid remains a symbol of female power and strength, with the ability to express and transcend according to – and despite – the world around her.

Today at The Brigid Well in Kildare, where this text was composed, the oaks are decorated with ribbons, pagan emblems, and infant cloths in memory of the Goddess. A ‘lúireach’ (or a ‘lorica’) is a protective prayer or a ‘breastplate’. The original version of this text takes the form of a poem and is dedicated to the children of The Bon Secours Mother and Baby Home at Tuam, Galway. 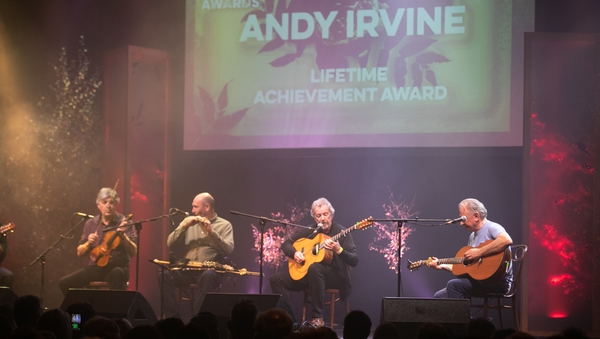