We're delighted to present an extract from Nick Richards' debut humorous novel Over The Top.

Richards' tale sees bumbling aristocrats Windy and Chatty infiltrating enemy lines dressed as an ace German footballer and his WAG respectively. A match is to take place in Germany between the Allies and Germany with Windy ordered to tilt the game in the Allies favour by playing below standard. Windy has other ideas, however...

Smuggling a blonde Windy and a voluptuous Chatty into Germany proved to be somewhat easier than expected. Many pockets of the German front lines were left sparsely manned as many soldiers had travelled to Alsace-Lorraine to witness the football hysteria in person. Had the British been more cynical they could have invaded Germany there and then and would have encountered surprisingly little resistance all the way to Berlin.

Fortunately for the Germans, the game was as eagerly anticipated by the English. After all, it was one thing to be at war with a country, but it was another to play them at football. Wars came and went, but who defeated who in ‘the footy’ would be indelibly marked in the memories of most of the working class.

As all eyes focused on the ever-shifting French–German border, the plan was to get Windy and Chatty to Munich so that they could blend with the German players, many of whom had been recalled from front-line fighting to train together.

Intelligence had picked up a number of communications in the previous few days, and the first training session was to take place at three o’clock on 20th December, five days before the scheduled match.

Windy and Chatty arrived at the Munich stadium with two days to spare. Seven days earlier, as they had travelled deeper into German territory, the enemy troops and general population began to recognise Windy’s face from the dropped pamphlets, and a sizeable escort formed to assist their idol, Ludvig van Kessler, to the training ground. Crudely drawn posters of support were commonplace along the route, ‘Make Love to Me, Ludvig’ being the most commonplace, held aloft by both women and men.

Windy’s interaction with the locals along the way was somewhat hampered by the fact that his oral German was not exactly fluent, but suspicion of anything untoward was conspicuously absent. After all, footballers were not worshipped for their conversational skills.

Some smooth juggling moves with a semi-decomposed turnip and an oversized potato had everyone eating out of Windy’s proverbial hand. The accompaniment of the disguised Chatty proved to be a master stroke, in that every German who laid eyes on the leggy, buxom brunette knew that only a footballer could woo such an aesthetically pleasing prize. Chatty, having no grasp of the German language at all, simply tittered girlishly and squeezed his bosoms together with his upper arms when German men addressed him.

Much agonising had gone into selecting the German team but there had been little doubt that Windy would be named as the lone striker. They had been training solidly for four days and Windy had bagged himself twenty-five goals in the five-a-side practice matches. Step overs, nutmegs, shimmys left and shimmys right – Windy had the full menu of tricks and moves. Granted, most of the German defenders were suffering from trench foot and shell shock but even so, his goal tally was impressive. Even more impressive was that, due to a severe leather shortage, the players were forced to use industrial weather balloons in place of footballs.

Left midfield was a concern, with Walter Krankenshaft having lost a sizeable portion of his hamstring a year earlier at a little town called Ypres. He had major difficulty cutting inside and would generally fall over the ball if his weight shifted to his right side. Left back was also a potential weakness. Lars Hornfeth was so psychologically damaged by his war experiences that he dived to the floor screaming hysterically every time a high ball was kicked in his direction. But German management was quietly confident that they would beat the English by two to three goals at least.

The evenings were spent resting, and all socialising was strictly verboten to keep the players in as good physical condition as possible. Windy and Chatty were granted a luxury room in the local hotel – luxury in that it offered more than turnip soup for breakfast, lunch and dinner. Their private room was a welcome respite from the pressures of undercover work. Chatty took the opportunity to massage his feet and ankles with a pumice stone, which he had received as a welcoming gift from one of the other WAGs.

All the women seemed to warm to him unconditionally. His lack of the language forced him to simply nod agreeably

to everything that was said and as a result he was considered to be a most wonderful listener. Within ten hours of their arrival, fourteen of the fifteen wives and girlfriends considered Chatty to be their best friend and confidante. Not that he understood anything that was said to him. He found a simple knowing nod and a consoling rub of the arm was more than sufficient to endear himself to the German womenfolk. If he was being truly honest, he was loving every minute of it.

Subconsciously, he thought it strange that he was far more popular as a woman than he ever had been as Chattingston Chatterley (now 45th in line to the throne, thanks to the Somme), but consciously he really didn’t care a jot. Apart from finding himself a little jealous of the perfect legs of Olga Mullerice, wife of the holding midfielder Gerhardt Mullerice, he was unusually content.

‘Bloody hell, Windy, this is going far better than expected. Too bloody well if you ask me.’

Windy, reclining on his bed and casually swigging on a bottle of Bavarian lager, agreed with him. ‘Footballing skills are an international language, my amply bosomed friend. Why only today I shouted, "Go on, my son" in the Queen’s English to Günther Shweisst and nobody seemed to notice.’

Chatty giggled and adjusted his brassiere. ‘Windy …’ He pinched a little roll of fat on his stomach between thumb and forefinger.

Windy, tired after the day’s events, grunted by way of reply. ‘Do you think I look nice in this dress?’ Chatty went on. It was a completely unexpected question and Windy replied without thinking. ‘Of course I bloody don’t, you blithering fool. You’re a man, for Christ’s sake. Not that I don’t envy your role in this subterfuge. Some of the Jerry women are quite the lookers. I’d give my right testicle to be in your high heels most days.’

Chatty’s demeanour altered suddenly, like a flash flood appearing out of nowhere in a desert. ‘Well, it wouldn’t kill you to say I look pretty once in a while. Would it kill you to say that, you insensitive bastard?’

Chatty threw his head down dramatically into his pillow and began sobbing loudly.

Windy had been warned about the effects of the hormone injections on Chatty’s grasp of logic and reason and felt he should console his distraught friend, but the match was tomorrow and he needed his rest. So he fell asleep to the sound of Chatty’s sobbing.

Over The Top by Nick Richards is available in ebook now. 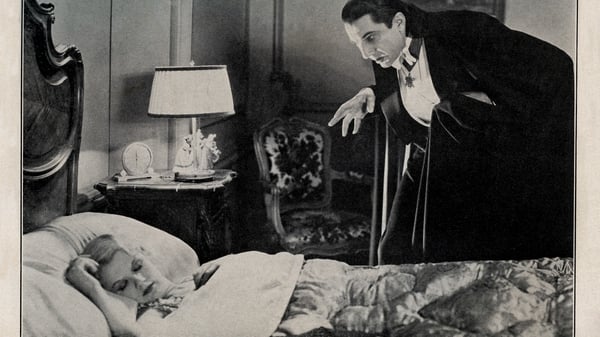 Dracul, the prequel to Dracula - read an extract