Renowned Irish composer and creator of Riverdance, Bill Whelan joined Sean O’Rourke to talk about his new album, Linen and Lace. The album is in association with Lyric FM and features three of his compositions performed by the RTÉ Symphony Orchestra under conductor David Brophy.

There was a lot to discuss, but top of the agenda was the sad news today that 'The Gentleman Piper', Liam O’Flynn, had passed away at the age of 72. Bill learned the news on his way into studio.

"I was kind of taken a little bit aback by the news. I knew he wasn’t well and he hadn’t been well for a while and I hadn’t realised quite how close it was because you know, he was very private, Liam."

Bill first encountered Liam when he joined Planxty. He told Sean that O’Flynn was "a real monument to Irish piping" and confirmed that Liam had been bequeathed Séamus Ennis’s pipes.

"I think Séamus Ennis recognised that here was the person to carry the flame."

Bill also spoke about his collaboration with James Galway, culminating in the title track of the new album, Linen and Lace. The flute concerto gets its name from each of their home cities. Limerick being known for its lace and Belfast known for its linen. Bill described the importance of performance.

"The important thing about commissioning is not so much the money, because the money is not ever massive but what is really important is that you’re going to get performances…[We] wrote a piece which, hopefully, challenged James’ rather amazing playing capacities."

The 25th anniversary of Riverdance is fast approaching. Bill described the atmosphere in what was then the Point Theatre.

"For those of it who were involved in it, it was a kind of a very nervous moment. Because it was, obviously, completely live television in front of 400 million viewers, and there was a lot of potential for somebody to slip or something to happen. It wasn’t until it was done that we were able to breathe a sigh of relief and look around…and then we saw the extraordinary reaction. It was incredible. It was an incredible moment."

When Sean asked if Bill was "retired", he assured listeners that there are plenty of projects in the works, including an album with violinist Colm Mac Con Iomaire.

"In my job spec, there was never a retirement date or pension."

Listen back to the whole interview with Bill Whelan on Today with Sean O’Rourke here. 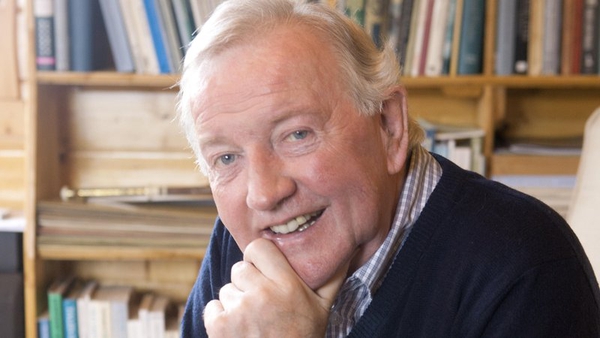