"I feel a lot of pressure to get this musical right because Coppers is just so beloved by Irish people," says Paul Howard.

It's funny to think that a man who dedicated his life to sports journalism at the age of 15 is about to write a musical set in one of Ireland's favourite nightclubs - but that's exactly what Paul Howard plans to do with his new venture, Copper Face Jacks: The Musical.

"I always thought I was a sports writer," agrees Paul. "There's some part of me that feels that I am still a sports writer, even though I haven't written about sport in about fourteen years. I never had any desire to be any other kind of writer but it just happens sometimes in your life or in your career that you're sent down a path you didn't expect to go down."

Famous for his satirical take on Irish society, Howard's Ross O'Carroll Kelly series of columns and books have had the nation in stitches for twenty years.

'Absolute legend' aside, his portfolio includes scripts, lyrics, a satirical football memoir and even George Hook's autobiography - a range of work that most writers dream of, something that Paul says was anything but planned.

"I never had any desire to write any novel ever in my life. All I wanted to do was write about sport - mostly football and boxing."

"Irish people just shock you with their inventiveness and their creativity with the language."

From writing postcard captions to interning in RTÉ alongside budding journalist Una O'Hagan, the Dublin man eventually landed himself a desk just outside Vincent Browne's door at the young age of 17.

"I was very, very, fortunate to work with some brilliant people. Right the way along I just sort of fell on my feet in terms of the people I got to learn from."

With no plan in mind, Paul moved fluidly from columns to novels to the theatre with the help of endless publishers, editors, and directors. But no matter the medium, his insights into Irish life remained spot on and eye-wateringly funny. After so many years observing Irish society, can he tell what's coming around the bend?

"Maybe I do have some notion of how society works - how life works - but I'm always surprised by... sometimes I take something that's topical, something that's in the news and I exaggerate it - and that's what satire is about really. A lot of satire is creating caricatures - but sometimes it turns out to be more accurate than you think at the time you're writing."

While he may not be able to see into the future, Howard does admit to watching the public carefully for mannerisms, one-liners and anything with a distinct Irishness. According to the author, one thing that has stood out time and time again is our relationship with language.

"I think the Irish are very inventive with language because we had to be. It's like the cockney thing; cockney rhyming slang grew out of a need to not be understood by the police, and I think there's something in the Irish psyche that's done that with language as well - it's not to be understood by the overlord, and we've had this language, English, imposed on us and what can you do with it except become better at it than the English? Do better things with it than the English."

"About a week after September 11 happened, I heard a girl in a coffee shop say to her friend, 'Oh, you're being so September 10' meaning, you're being petty or irrelevant. I just thought, 'Wow'. I wrote that down, I think I used it in the column or used it in one of the books but there are times like that when Irish people just shock you with their inventiveness and their creativity with the language.

These days, while taking a break from 'Rosser', Paul is taking on one of his most ambitious projects to date - Copper Face Jacks: The Musical, a stage adaptation that will hold up a snapshot of Ireland's most iconic institutions, a place for laughter, tears, 4am phone calls and dodgy dance moves... so no pressure then.

"I feel a lot of pressure to get this musical right, because Coppers is just so beloved by Irish people. It's a part of Irish life - it's a central part of Irish social life, I think, especially Dublin social life. I kind of look on it as a sort of GAA club disco in Dublin, and that people who move to Dublin know that there's this place where they can go and actually feel at home. I think that's part of the success of Copper Face Jacks.

"It's West Side Story, but involving Guards and nurses and Dubs and Culchies,"

"During the years of the Celtic Tiger, when a lot of nightclubs in Dublin were pursuing this exclusive door policy where the bouncers wouldn't let you in because your shoes are too casual or your earrings were too 'hoopy' or they didn't like inter-county jerseys, Coppers was never like that.

"Its always been a club where if there are ten girls from Offaly up for a match in Croke Park and they're all wearing Offaly colours, they know they can meet in Coppers afterwards. They couldn't say, 'We'll meet up in Reynards' or 'We'll meet up in Lillies' - they were never going to get in there in a gang. But they knew they could meet up in Coppers, that was the success of it."

"So, it is loved. I really want people to leave the musical feeling like they've had a night out in Coppers. I want them to feel like they've listened to great music, laughed all night and to go home feeling they've had a good time - without the hangover."

With a venue as well known as Coppers, it only makes sense that Paul's research is coming from the very people who vowed to sell their soul for an elusive gold card.

"The thing about when you announce that you're doing a musical about Copper Face Jacks - and this has been in the works for about six years now - all of these stories suddenly come at you, and I think there's probably 50,000 marriages in Ireland that have come out of Copper Face Jacks - maybe one or two divorces as well."

A young woman from Kerry moves to Dublin to fulfil a lifelong dream of working in the claims department of the VHI. The harsh streets of the big smoke seem all too intimidating - until the sound of Maniac 2000 draws her to the doorstep of Copper Face Jacks, where she discovers a home away from home.

Nurses, Guards and familiar faces surround our leading lady until finally, her eyes set upon a young man who happens to captain the Dublin football team. The scene is set; these two are a regular Romeo and Juliet... but in GAA jerseys.

"The funny thing is, somebody asked me last week if I'd like any of the Dublin football team to be in it, and I suddenly realised that Bernard Brogan was injured and is probably going to miss the championship this year..."

What's so comical about this storyline is just how spot on it really is. For such a tiny city, we manage to find divides everywhere we turn; the northside vs the southside, one posh school vs another identical posh school, Dublin vs the rest of the country...

With twenty years of Ross O'Carroll Kelly behind him, Paul says he had all the research he could possibly need for these star-crossed lovers.

"I know a guy who went to Terenure and he broke his ankle. He was in his late 50's or early 60's at the time and he went to the hospital and the doctor who had to reset his leg went to Blackrock College and he recognised him on the operating table and said, 'That's the guy that went to Terenure, we played against each other 45 years ago...'

"So when he put his leg in the cast, he made the cast in the Blackrock colours and this guy from Terenure thought this was the funniest thing that ever happened in his life. They were still carrying on those school allegiances right into their dotage, you know? They die saying 'I'm a Blackrock man' or 'I'm a Terenure man'."

Although the script is written, musicals have multiple drafts, re-writes, choreography and dance numbers to add before opening night - speaking of which, who will be dancing to Summer of 69 on the Olympia stage?

"Gosh. Who have I got in mind? I haven't really... I'd love to say someone... The funny thing is, somebody asked me last week if I'd like any of the Dublin football team to be in it, and I suddenly realised that Bernard Brogan was injured and is probably going to miss the championship this year - so he may have a few weeks free during the Summer. So, if Bernard Brogan wants to make a cameo in it - if he can sing, if he can act and if he can dance, I would love to see him on the Olympia Stage."

While we wait for a Dublin Football Chorus to emerge, Paul says we can expect to see Ross on our TV screens and, who knows, maybe Coppers: The Movie could be coming to a cinema near you.

"I've written a Ross O'Carroll Kelly TV series. It's the first series of a comedy that's set in 2005, which was the height of the Celtic Tiger so it's almost a kind of period-comedy-drama now. I've finished writing that, so now it's just a case of going into production next year.

"Copper Face Jacks: The Movie? I don't see why not. Like I said, it's West Side Story, but involving Guards and nurses and Dubs and Culchies, and I think a lot of the themes in it are universal."

Copper Face Jacks: The Musical will arrive on the Olympia Stage on the 5th of July - you can your book tickets here. 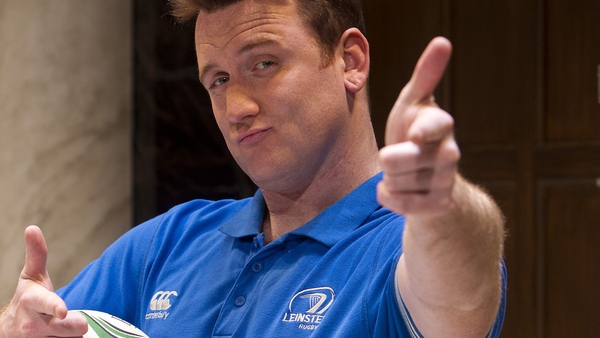 The Roysh Stuff: Rory Nolan on being Ross O'Carroll-Kelly Theatre