Born in 1904 in Inniskeen Co. Monaghan, Patrick Kavanagh is regarded as one of the foremost Irish poets of the 20th Century, famous worldwide for seminal works such as On Raglan Road and The Great Hunger.

On the 50th anniversary of his passing, we celebrate Kavanagh's life and legacy with a choice selection of audio and video from the RTÉ Archives.

Last weekend, Sunday Miscellany marked the anniversary with a very special live broadcast. Conall Hamill offers an appreciation of Kavanagh and tells the story of his two Dublin canal bank seats in his essay He Was A Quare One; folk singer Barry Gleeson sings If Ever You Go To Dublin Town; Bernie Crawford reads her poem Pilgrimage to Inniskeen, which recalls a visit to Kavanagh's homeplace; and Peter Duffy tells the story of recuperating after an accident in St James's Hospital and being comforted by the words of Patrick Kavanagh: both the text of The Great Hunger, which he was performing at the time as a stage show, and Kavanagh's poem, Hospital, written for his own time in St James's Hospital.

The Poetry Programme offer their own celebration of the work of Patrick Kavanagh, as poets Noel Monahan and Enda Wyley join Olivia O’Leary to discuss the poet’s work and his legacy.

RTÉ Archives have an extensive and utterly essential video archive dedicated to Kavanagh, including some remarkable footage of the man in full flight on a number of RTÉ programmes - including his television debut, on Self Portrait back in 1962.

In the RTÉ radio documentary On The Street Where He Lived, Maxi and Moya Doherty visit John Coll’s sculpture of Patrick Kavanagh on the banks of the royal canal and talk about his life and works, as well as the story behind Raglan Road. They meet poet Brendan Kennelly, who knew Kavanagh, and John Coll himself.

Listen: Patrick Kavanagh - On The Street Where He Lived:

And what would a Kavanagh tribute be without an 'auld rendition of Raglan Road? While Luke Kelly's take will forever remain the definitive one, here Glen Hansard has a decent stab at making it his own:

We'll draw matters to a close with that classic scene from Martin McDonagh's film In Bruges, in which the wistful melancholy of Luke Kelly's version of Raglan Road underwrites one of Brendan Gleeson's most memorable movie moments: 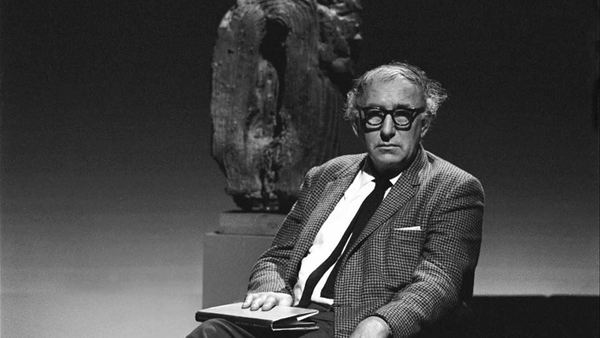