In Paul Howard's latest play, his creation Ross O’Carroll-Kelly takes his rightful place in the spotlight… starring in his own one-man show. Rory Nolan has played Ross O'Carroll-Kelly since his stage incarnation began - now, as Postcards from the Ledge opens at the Gaiety Theatre, we talk to him about life as a living ledge.

The Ross O'Carroll-Kelly stories give a satirical and insightful view of a certain section of Dublin society. Did you read the books as they came out? And how well do you think Paul Howard has captured the city?

I think the stories and the character give us an insightful view of Irish society, not just a section of Dublin. My adulthood coincided with Ross's, and as the books came out I'd read them, plus keep up with the (Irish Times) column. I marvel at how he can get it all so funny and so right, and how prolific he is. It says a lot about the state of the country that he has so much material! Great satire works on so many levels, and it's first port of call is to show us something we all recognise, which is what Paul captures brilliantly. He's such a clever writer, he twists the knife when we least expect it, or sometimes without us even knowing.

Paul called you 'one of the finest actors of his generation'. How did you begin working with him? And how has the relationship developed with each project?

That's very flattering, but it just shows you how little Paul knows about acting!!! I got the job ten years ago. I got a phone call from my agent to say that Anne Clarke, our amazing producer, was putting together a Ross O'C K play and would I be interested in meeting her and Paul to read for it. After my agent hung up, I sort of winced at the sky and thought, with the head on me, I'd want to make a right balls of the audition to not be offered  the part. So we got to work. I've always said how generous and collaborative Paul is with the world he's created, so working with him makes for a very chilled, funny, exciting atmosphere. As long as he keeps writing the plays and wants me to do them, I'm there.

How does one get inside the mind of Ross O'Carroll Kelly?

It would be easy to say Ross doesn't have much of a mind, but that's really not the case at all. One of the joys of playing the character is delving into the stuff that makes people want to see him succeed. For any comedy to work, and especially a character that seems, on the outside, as superficial as Ross, there has to be a heart or a reality. There has to be something at stake or the comedy won't work, or the character will be utterly one-dimensional, which is no fun for anybody. Ross is a big thick with a huge capacity for love and kindness and, as dysfunctional as they are, family. Playing him is a joy. Having a thousand people screaming laughing and cheering you on every night is rare for an actor, so I relish every moment of it.

You have an incredible range of work behind you. You've gone from Ross O'Carroll Kelly to Waiting for Godot and back again. Do you have a preference for what kind of role you take on?

Not really. I'll go where good work takes me, if I'm lucky enough to get it. I'm immensely proud and aware of how lucky I've been with the breadth of work I've been involved in. I love trying new stuff out on stage, or playing a role that's in complete contrast to the last. Saying that, I can find lots of similarities between Pozzo in Waiting for Godot and Ross O'Carroll Kelly!

Postcards from The Ledge is set in 2029, when Ireland is in the middle of an economic boom and we have a female Taoiseach. How on the money do you think Paul is with this prediction?

I'd love to see it, personally, a female Taoiseach overseeing an economic boom. There has always been a certain prophetic quality to Paul's writing in the plays. The Last Days of the Celtic Tiger was produced in 2007, and we all know what happened after that. Bertie made a political comeback in Breaking Dad and the next thing he was all over the place, there was even rumours of him going for the presidency at one stage! So who knows? I suppose the big question is If there was to be another economic boom, what did we learn from the last one. And if the play was answering this question the answer would probably be: Not much.

What message do you hope audiences will take home from the play?

I think audiences will come skipping out of the theatre, buzzing from the laugh they've just had. There's lots going on in Postcards. So it's not just the great comedy. There's a real heart to this piece. I'd say audiences will come out and ring their dads. Call to see their mums. Listen to their children and try to get on as best they can with their partners!

Actors must dream of having their own one-man show in the Gaiety Theatre - was this a long-term goal for you or a happy turn of events? Was it a stressful or enjoyable experience?

Totally a happy turn of events. When Anne came to me with the idea, I was obviously very flattered and then of course trepidatious: I'd never been onstage as Ross without the other characters, he was always the nucleus to the plays - would he work without the others to ping off? But then I read the script, and any worries I had were laid to rest. So if there's any stress, it's what you as a performer bring to the project, in that you want it to be all it can be, and more. It's massively enjoyable working out how we are going to bring the audience in the journey with all the laughs - and maybe even a tear or two.

What are your career goals going forward? Is there a ten-year plan in the works?

Utterly not. Part of the terror of being an actor is part of the excitement. One day you could be on a film set, the next you're around a table in a theatre reading an idea that will hopefully take flight. Ten years? Retired and stinking rich. Hahahaha.

What is the best piece of advice you've been given so far?

Do you think we need to encourage more young people to get into theatre? If so, how should we go about it?

Without reservation we do. Its not just our rich cultural heritage that should be introduced to kids, its teaching them to appreciate the arts in general. What's life for if we can't go to a gallery or a concert or the theatre and enjoy the world around us through the countless forms of art that are here to make life better? I think there should be better, more accessible cultural policy aimed at schools and colleges, coming from the government. But maybe we have to get them to start going to the theatre first.

Postcards from the Ledge is at the Gaiety Theatre until 11 November - more details here. 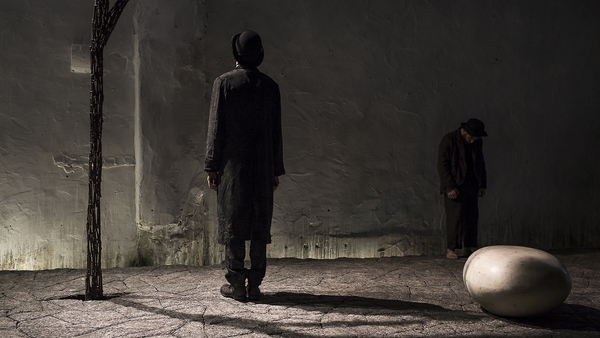 The road to Godot - Beckett by design