Is there such a thing as 'Celtic music' and if there is, what exactly is it? These are some of the questions that legendary musician Dónal Lunny sought the answers to for a new four-part musical travelogue series broadcasting on RTÉ One this October.

For The Celtic Songlines, Dónal travelled to all of Europe's Celtic nations from The Hebrides in the north to Galicia in the south visiting the Isle of Man, Wales, Cornwall and Brittany as well as Ireland. Along the way, he met with musicians, historians and folklorists who helped build a fascinating picture of what Celtic musical identity means in modern Europe.

As part of the project, Dónal recorded a number of initial tracks in Ireland with the help of some of the country's best-known musicians to bring with him on the journey.

"The idea came from the producer David Bickley originally," said Dónal, "and it sounded fascinating from the start. We recorded a number of tracks at Grouse Lodge in Westmeath that had a relevance to some of the places we were visiting and the idea was to add to them with the various musicians we met along the way and it turned out to work really well."

Some of the best-known folk and traditional musicians in Europe took park in the programme including the likes of Paddy Glackin, Máirtín O'Connor, Mairéad Ní Mhaonaigh, Alan Stivell, Donald Shaw, Susana Seivane and Carlos Nuñez.

In Galway, Dónal gets a look at some of Ireland's oldest musical instruments in action and in Dublin he visits the Irish Traditional Music Archive. In Glasgow he visits the Royal Conservatoire of Scotland where a new generation of traditional musicians are making their mark while on the remote Isle of Canna we get a rare glimpse of one of the world's most extensive collections of Celtic music and folklore.

For Dónal, meeting and playing with a huge variety of musicians from across Europe proved to be a very rewarding experience.

"Wherever we went we would meet up with local musicians and basically just play – and it was a very enjoyable experience. The whole idea of the show is to explore the connections between the music of the different Celtic areas and what really struck me as we went along was that the people themselves were the real connection.

"Wherever we went, I felt a genuine connection with these musicians, the passion was genuine and the love for it was plain to see and that is what united them all."

Now seventy years old, Dónal had visited many of the locations before during his career, but for this project visiting the various areas one after the other gave him a different perspective.

"When you are travelling from one area to the next so soon, you do start to pick up on the similarities and what they have in common. Of course I'd been well aware of the close ties between Scotland and Ireland, for example, but what I noticed most was this real enthusiasm for keeping traditions alive and building on them."

As well as looking at where these traditions have come from, the series also looks at where they are likely to be going, talking to young musicians and artists as well. On the Isle of Skye, Dónal met with members of the Peatbog Fairies and on the Isle of Man learnt of a resurgence in Manx traditional music led largely by a new generation of young musicians. In Brittany, he joined piper Konan Mevel from electro-Celtic band Skilda to play a tune in a neolithic tomb!

The journey takes Dónal from north to south along the Atlantic coasts of Europe visiting some of the continent's most spectacular scenery along the way, reaching journey's end at the Tower of Hercules in A Coruña on Spain's north west coast. It was from here that the Celtic king Breogán was said to have spotted a verdant green isle to the north and set sail to settle a new Celtic kingdom.

Having now completed the project, Dónal says that he can't wait to go back to may of the places he visited for the programme.

"It was a very positive experience overall,"he said, "and the one thing that I saw everywhere was this incredible upsurge of enthusiasm from young people. It gives you great confidence and optimism for the future of the music, for all of the traditions from Scotland to Galicia. Celtic music has developed a kind of cultural identity of its own in recent years, but what really unites all these places is the spirit and love that people have for their traditions". 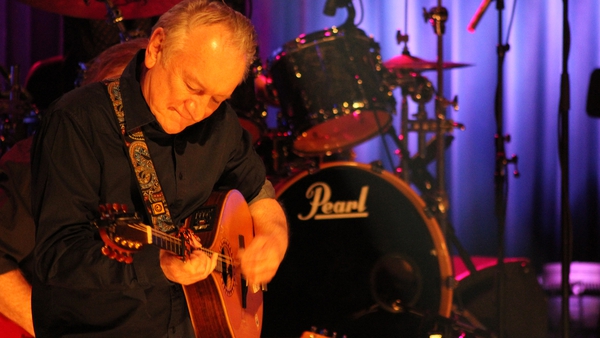 Something For The Weekend: Donal Lunny's Cultural Picks