Colin Walsh has been announced as the overall winner of the RTÉ Radio 1 Francis MacManus Annual Short Story Competition for 2017.

Since its establishment in 1985, the annual RTÉ Radio 1 Francis MacManus Annual Short Story Competition, has become an integral part of the broadcaster’s commitment to supporting new writing, while the broadcast of all of the shortlisted stories forms an important part of the literary content of RTÉ’s schedule.

The winner of the overall prize receives €3,000, with prizes of €2,000 and €1,000 being awarded to the second and third prize winners. This year’s shortlist will once more feature on the Book on One, beginning with the winning story on Monday 2 October 2017.

This year’s First Prize winner is Colin Walsh for his story The Flare Carves Itself Through The Dark. The story is read for RTÉ Radio 1 by actor Gary Murphy. Colin grew up in the West of Ireland, and began writing fiction in 2016 - two of his stories will be published this autumn, including Seen/Unseen, which was shortlisted for the Bath Short Story Award 2017.

Listen to The Flare Carves Itself Through The Dark:

In The Flare Carves Itself Through The Dark, it is the eve of a teenager’s departure for university, where in a small town he works his final shift in the local cinema. As he gets ready for a new life beyond the Cineplex, he encounters local characters that promise to shape his future, for better or worse.

Of this winning story, the judges said that "Great short stories have to be great on a sentence level and great on a structural level, and the best achieve even more – they grab you, then surprise you. The Flare Carves Itself Through the Dark achieves everything that a great story should. The observations are honest and creative, the characters and town sparingly but well-drawn, and the ending a revelation."

The Second Prize Winner is Barbara Leahy for her story Stones That Might Be Diamonds. It is read for RTÉ Radio 1 by Kathy Rose O’Brien. Barbara Leahy, from Cork, was previously shortlisted for the Francis MacManus competition in 2014. Her stories have appeared in anthologies and journals, and have won awards including the 2017 RTÉ Guide/Penguin Ireland Short Story Competition. Her story is about a young girl seeking power in an adult world.

Listen to an extract from Stones That Might Be Diamonds:

The Third Prize Winner is Felipe Deakin for his story Flashing Lights. It is read for RTÉ Radio by Kathy Rose O’Brien. Originally from Uruguay, Felipe has lived in Ireland for 15 years. He has been a film critic for Totally Dublin and currently works in a vegetarian café near his house, while also working on a tragicomic novel that is as he puts it "nowhere near completion." In Deakin’s story, a girl is in love for the first time. She struggles to reconcile her romantic notions about her new boyfriend with the terror she feels after witnessing him have an epileptic fit during a late-night taxi ride.

Listen to an extract from Flashing Lights:

This annual RTÉ short story competition was founded in memory of Francis MacManus, the Kilkenny born novelist, biographer and former Head of Talks and Features at Radio Éireann. The competition has been a launching pad for several new and emerging writers who have subsequently received national and international acclaim; they include Claire Keegan, Molly McCloskey, Anthony Glavin, Ciarán Folan and Nuala Ní Chonchúir.

The competition, which is open to everyone resident in Ireland and Irish people living outside of Ireland, always attracts hundreds of stories for consideration. The 2017 judges were Sarah Davis-Goff, who is co-founder of Irish publisher Tramp Press; Anthony Glavin, formerly Commissioning Editor at New Island and now an independent editor as well as a novelist and short story writer; and Lia Mills, short story writer and novelist whose book Fallen was Dublin One City One Book’s choice for 2016.

In recent years, by way of emphasising that this is a short story competition for radio, each of the 26 shortlisted stories is recorded by professional readers before the winning stories are decided. As well as reading their texts, each of these recordings are listened to by the judges and only then do they decide the winners. This year’s recordings were produced by Sarah Binchy and Clíodhna Ní Anluain.

Here is the broadcast schedule for the 2017 Shortlist, as well as the readers of each story to be broadcast nightly on RTÉ Radio on the Book on One at approximately 11.20pm during Cathal Murray’s Late Date programme, beginning with the winning story on Monday 2 October 2017:

Monday 2 October: The Flare Carves Itself Through The Dark by Colin Walsh and read by Gary Murphy

Tuesday 3 October: Stones That Might Be Diamonds by Barbara Leahy and read by Kathy Rose O’Brien

Monday 9 October: That August by Bríd Connolly and read by Ger Ryan

Tuesday 10 October: Because We Are Not Butterflies by Bernadette Cotter and read by Ingrid Craigie

Monday 16 October: Coming Down Hard by Thomas Kiernan and read by Emmet Kirwan

Monday 23 October: Cut The Grape by Mark McGlynn and read by Peter Hanly

Friday 27 October: Time For You And Time For Me by Celine Naughton and read by Ali White

Monday 30 October: Waiting for the 8:07 East by Paul James O’Donnell and read by Andrew Bennett

Tuesday 31 October November: The Half-Light by Angela Lyons and read by Emmet Kirwan

Friday 3 November: The Swimmer by Dolores Walshe and read by Peter Hanly 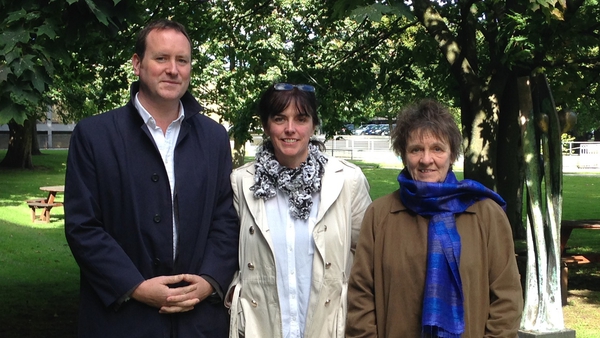