Performance artist Amanda Coogan has collaborated with the Dublin Theatre of the Deaf, for a much-anticipated show in this year’s Dublin Fringe Festival entitled Talk Real Fine, Just Like a Lady. Amanda joined Seán Rocks on RTÉ Arena to explain where it all began.

"Three years ago in 2014, we collaborated for Fringe 2014 and we played in The Project with a piece called, You Told Me to Wash and Clean My Ears.  Now I’m going to say for Nina Simone fans out there, Mississippi Goddam, yes, we’ve taken it literally from there. This new production is called 'Talk Real Fine, Just Like a Lady - so you’ll stop calling me Sister Sadie' - it's a continuation of that lyric, of that spirit, of that agenda that notion of kind of a protest or strife or quality recognition. "

Amanda was born to two deaf parents and tells Seán that Irish Sign Language was her first language. She states it was while studying at the Limerick College of Art and Design, where she found her calling to be a performance artist and claims her upbringing had influenced her decision.

"Well, it’s in my DNA. I was brought up by two wonderful deaf people, my parents. So Irish sign language is my first language"

Amanda told Seán that audiences will have to engage with their bodies, as there will be no verbal acting at all in the show - she's interested to see how people appreciate the production in a sensorial way, visually and aurally.

"You’ll be lead in by the hand by our comrades, part of the cast. They’ll seat you under Mrs Mark’s skirt. So you’ll have to engage your body as the audience. You’ll have to crouch and bend and then find a hole over your seat and pop your head through it. "

Talk Real Fine, Just Like a Lady will be performed at the Abbey Theatre, Dublin from Sep 20 - 23 - details here. For more from Arena, click here. 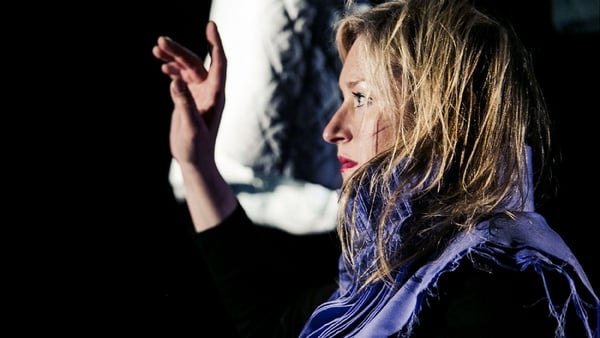 Amanda Coogan on translating the Deaf experience to theatre