Showcasing the vibrant arts and creative scene of towns, villages, islands and cities across the country, thousands of participants are gearing up for an evening of culture, creativity and celebration as they prepare for the Culture Night festivities - view the entire programme of events here.

Culture Night organisers are hoping to build on last year’s phenomenal turn-out of over 400,000 nationwide: museums, galleries, cathedrals, studios, libraries, parks, government buildings, theatres and other venues across the country will throw open their doors late into the night for free visits, tours, workshops, readings and performances. With thousands of individual events for people of all ages, covering the entire cultural spectrum, there is free family fun to be had in every corner of the country.

RTÉ will once again partner with Culture Night to deliver an evening's entertainment to remember: RTE Radio 1’s Arena returns to the upper courtyard of Dublin Castle, for a live broadcast featuring music, theatre, comedy and poetry in the company of the RTÉ Concert Orchestra. Elsewhere, audiences are invited to join Radio 1’s Sunday Miscellany, Countrywide and The Marty Squad as they record special shows from The Coach House in Dublin Castle, and the award-winning Drama On One team will demonstrate how to make a radio play. Over in the National Concert Hall, RTÉ Cór na nÓg will perform a selection of scores from Les Misérables, while the RTÉ National Symphony Orchestra, with conductor Robert Trevino and pianist Paul Lewis, will perform two concerts from a programme that includes Tchaikovsky’s Romeo and Juliet Fantasy, Grieg’s Piano Concerto in A Minor and Hindson’s Speed.

Highlights in the capital this year include the Irish Railway Record Society which will host an open evening in their Library, Archives and Small Exhibits Museum of railway memorabilia in the former railway goods offices at Dublin Heuston Station. Visitors to the National Gallery of Ireland can see its spectacularly refurbished historical wings, with tours and talks hosted throughout the evening. Dance Ireland is offering free dance classes for people of all ages, while at Poetry Ireland children can construct poetry mash-ups with gigantic words. Unpublished children’s and young adult authors have the opportunity to participate in 10min ‘speed pitching’ sessions, pitching their book ideas to The O’Brien Press. Artist in Residence of Cathal Brugha Barracks, Margaret Fitzgibbon has a site-specific installation animating the prisoner's yard and cells with the imaginary presence of one of Ireland's foremost feminists, Hanna Sheehy Skeffington.

Outdoor, interactive events include Morning Gloryville, Dublin’s immersive morning dance party, which stays up late to bring their first ever Culture Night event to Meeting House Square. Zero-commitment choir Sing Along Social, designed for people who can’t really but love to sing, comes to the Civic Amphitheatre, and Smithfield Square’s Interactive Playground returns with an even bigger programme for all ages to enjoy, from yarn spinning workshops to fencing taster classes. Exploring the cultural side of Dublin by foot, bike or bus is made easy with the Culture Night Tours, which include the Dublin Street Art tour, Dublin Bus Ghostbus tour, Instagrammers Dublin Photowalk and The Worst Tour of Dublin, a fun tour of the city with almost-facts.

Across the country, thousands of events are happening including a screening of the eagerly-anticipated new Irish film Maze in Cork City Hall Concert Hall followed by a Q&A with director Stephen Burke and some of the cast and crew. In Clare, three of Ireland’s most skilled fire performers present their latest production, Firestorm, a show of enchanting light, shadow and choreography. Kinvara Courthouse in Galway hosts Poetry, Paintings and Song in Court featuring an exhibition by visual artist Darryl Vance and performances by poet Sarah Clancy and singer/songwriter Sharon Murphy, and in Kerry intrepid art lovers can meet Irish and international artists on retreat at Cill Rialaig on Bolus Head followed by a ‘Famine Supper’ in the Meeting House once lived in by seanachaí Sean Ó Connaill. Cultural Collisions in Edenderry, Offaly will see the Town Hall Square transform through music, dance, food, puppetry, surreal carnival and theatrics. The Big Bold Brigid Cleary in Tipperary is a one woman show about the life and events which led to the death of Brigid Cleary, the woman accused of being a changeling and burned to death by her husband in Tipperary in 1895. Visitors to Rathkeale Arts Centre in Limerick have the chance to meet and hear one of Ireland's best loved poets Rita Higgins, while traditional musicians in Achill Island will embark on a traditional music tour across the island.

Visit Belfast to witness a Street Art Opera by Dumbworld, a gay wedding in a wrestling ring and a dog show in the Sunflower Bar. In Cavan, The Automated Orchestra by Robbie Perry is a musical exhibition created and constructed from recycled materials and re-purposed objects. Cassini Culture at Blackrock Observatory in Cork invites guests to an evening of spectacular science to celebrate the retirement of the Cassini-Huygens, the unmanned spacecraft and a flagship-class NASA–ESA–ASI robotic spacecraft’s mission to Saturn. In County Cork, memoirist Alice Carey, author of From Manhattan to West Cork: Alice’s Adventures in Ireland, will host half-hour workshops exploring the fine art of diary writing.

This year, Culture Night will also host a cross-border performance entitled Linear Belongings / Verticial Territories with Irish artists: Aoife Ward, Paddy Bloomer, Sean Hillen, Anne Mager, Marcel Krueger and 1st German Electrophonic Orchestra in Belfast, Dundalk, Drogheda and Dublin. Culture Night travels beyond the borders of Ireland, too, with events planned in Paris and New York to showcase Irish culture internationally. In Paris Centre Culturel Irlandais and Kevin Kavanagh present Many Worlds, a group exhibition of new work by six artists reflecting the diversity of contemporary painters in Ireland, including Diana Copperwhite, Paul Nugent and Geraldine O’Neill. In New York, The Irish Arts Centre will host John Minihan: Beckett and His World, an iconic photographic exhibition that captures the essence of Samuel Beckett and the luminaries who made up his world, in black and white portraiture, including director Walter Asmus, author Edna O’Brien and publisher John Calder.

Cultural audiences in the capital can travel for free on the night: transport partner Dublin Bus will provide free buses every 20 minutes starting on Bachelor’s Walk, Pearse Street, Aston Quay and Eden Quay bringing visitors to and from their favourite cultural quarters - Temple Bar Tradfest will provide some trad tunes to soundtrack the journey. In Cork, Bus Éireann will provide three complimentary bus routes to cater for those on the cultural hunt and Iarnród Éireann Irish Rail is offering 100 family passes for travel on Culture Night.

Culture Night is presented by the Department of Culture, Heritage and the Gaeltacht, with the regional arts offices, local authorities, and cultural organisations throughout the country - stay tuned for further updates (and choice Culture Night picks) in the coming weeks. In the meantime, visit the Culture Night website for info and updates. 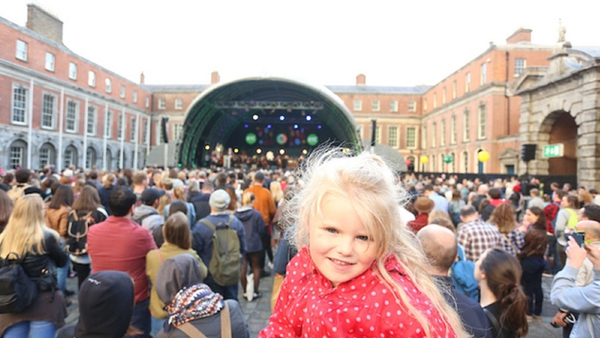