We're counting down to the inaugural Dead In Dun Laoghaire event, a one-day festival celebrating the very best in crime fiction, with a guest list that includes the cream of modern crime authors, taking place from at Dun Laoghaire's Pavillion Theatre on Saturday 22nd July.

Today, we present the opening chapter to Two Nights, the latest thriller from Dead In Dun Laoghaire guest Kathy Reichs.

My right-hand neighbor thinks I’m crazy, so she brings me cheese. I heard the one- two crunch of her boots on the path. A pause, then the oyster shells crunched again.

I lifted a corner of the towel covering my kitchen window. She was already five yards off, a shadow-laced smudge among the live oaks.

Six years, and I still didn’t know her name. Didn’t want to. Had no desire to exchange recipes or comments on the tides.

I cracked the door, snagged the plastic- wrapped package, and shoved it into the fridge.

Truth is, I don’t mind the cheese. What I hate are the sharp little eyes plumbing my soul. That and the pity.

And the goats. When the wind is right, the bleating bullies into my dreams and I’m back in Helmand with the blood and the dust. Or maybe I’m reading the old gal wrong. Maybe the cheese is a bribe so I don’t murder Billie or Nanny.

My left-hand neighbor hanged himself from the end of his pier. His dog curled up and died by his head. Double suicide. Maggot jamboree by the time the bodies were found.

Arthur was a wood-carver, Prince a collie. I prefer their silent company. Fits my two- pronged plan for life. Need no one. Feel nothing.

I ran six miles and put in time with my free weights. A beer and a sandwich for lunch, then I spent the afternoon shooting Cheer-wine cans off a dune at Gray Bay. The beach was deserted and not far away. Nothing is.

Goat Island is a skinny strip of sand just a monkey’s spit wide, uninhabited until Henry and Blanche Holloway rowed over to escape the stresses of 1930s Charleston. Legend has it they spent decades in a hole covered with driftwood and palm fronds.

Now that sounds warp-speed psycho to me. But Henry and Blanche had one thing right. For solitude, Goat Island is the cat’s meow. Even today there’s no ferry, no paved road, ergo no cars or trucks. No access except by private boat. Outsiders rarely find reason to come.

The few scrappy residents live in cottages cobbled together from wreckage ignored or tossed ashore by Hurricane Hugo. My porch roof is the ass end of a disemboweled rowboat. Goat Lady’s shed started life as Arthur’s latrine.

Don’t get me wrong. I don’t live hole-in-the-ground au naturel batty. I’ve got electricity, a septic tank. All the advantages.

The downside to Goat is the spring mosquitoes, some large enough to carry off St. Bernards. By six the bloodsuckers were organizing into squadrons, preparing to strike. Over and out for moi. I was home rubbing aloe on bites when the bell above the stove jangled its jerry-rigged warning.

The moths did their frenzied dance in my chest. I dug the shotgun from my duffel, thumbed shells into the chamber, and crept to a window. The sun was low, flaming the waterway orange and making me squint.

Far below, a figure crouched on my dock, securing lines. Both human and boat were featureless black cutouts against the tangerine glow.

My grip tightened on the stock, ready to pump.

The figure straightened and headed my way. Male. Barrel-chested. Not big, but muscular in a scrawny-arms-and-legs way.

I recognized the confident drill-sergeant stride. The contour of the ragged Tilley hat. Not vintage, just old.

I snapped into action. Ammo out and into the duffel, guns into the closet. Liquor bottles, glasses, and dirty dishes under the sink. Yesterday’s clothes and flip- flops heave- ho into the bedroom.

His knock was hard enough to rattle the screen in its jamb. One last look around, then I hurried to undo the inner door locks. Two, then the deadbolt.

He stood with hands on hips, looking left toward the marsh. His eyes were blue, his face weathered as the month of March.

"Something’s gotta be wrong for me to drop by?" Gravelly. Gruff.

"Of course not." Plastic smile molding my face. "You usually give a heads-up."

"You gonna leave me out here till I need a transfusion?"

I lifted the hook and stepped back. Beau entered, gaze skimming. A cop gaze. One spin around the cottage, then it settled on me, running the same critique I resent in my neighbor.

The scar burned an itchy path below my right eye.

"I didn’t recognize the boat." Concentrating on normal. "Getting the gel coat repaired. But what? You were maybe expecting Bowie?"

"Gonna offer a man a beer?"

I got two Palmetto Ambers from the fridge and we moved to the living room, a small hexagon accessed through a wood- trimmed arch. Ceiling fan, sofa, two threadbare chairs, three beat-to-hell tables. No need for décor. Only Beau and one other were allowed in my home.

Beau dropped onto the sofa, sloughed off the hat, and took a long pull of his beer. His hair was gray and buzzed to the scalp. Had been since I’d known him. Probably since his mama first shaved it with clippers at a kitchen chair.

I sat opposite, knees jutting, feet under my bum. The five-window view wrapped us like an IMAX featuring the Atlantic seaboard.

A picture formed in my head. Beau with a younger man’s face. Hiding his frustration, his pride. Not pleading, but close. Asking a fellow cop to give his foster kid yet another break. Red- blue pulsing his badge and the honky-tonk shack at his back.

Beau raised his right ankle to his left knee. Cleared his throat. Levered the foot up and down several times.

"Had an interesting call today." Eyes on a Top-Sider as old as the hat. "Lady name of Opaline Drucker."

That triggered a ping in some remote brain chip.

"I’ll leave the telling of that for after."

"Hearing me out." Tone a million miles from drop-by casual. "Mrs. Drucker has a problem. I think you can help her."

"Why would I want to do that?"

Beau took another swig, then set the bottle on the floor. Uncrossing his legs, he leaned forward and looked me full in the eye. "You’re in a bad place, Sunnie."

"I’m happy as a clam out here." Arms uplifted to emphasize the level of my joy.

"We both know that’s not what I mean."

"Look, I get it. You overreacted, you killed the bastard."

"PSO ruled it a justified shoot." Curt. The incident was the final straw for the Professional Standards Office, Charleston PD’s version of internal affairs. The end of my career in law enforcement. And ancient history.

"Damn straight it was." Beau flicked dirt from jeans too faded to qualify as blue. Maybe a bug. "The scumbag nearly took out your eye."

"You here to remind me what a loser I am? First the Corps, then the job? News flash. I already know." Meaner than I intended. Or not.

"It’s been six years." "Ah. You’ve come to enforce some kind of self-pity statute." Arm-wrapping my chest and tucking my hands into my pits. "Oh, wait. You’re off the force, too."

Beau breathed deeply. Exhaled through his nose. Chose his words.

"You can’t hide on this island, talking to no one, doing God knows what to yourself."

"I have a bestie that lives in my bedside table. Want to meet him?" "See. There you go. The least little pressure and out come the jokes."

"Of course you’re not nuts." Frustrated, trying for patient. "But you can’t just sit out here doing nothing."

"I run, I shoot, I fish, I read." Gut rolled tight as an armadillo under threat.

"I’ve tried normal. Too many rules. Too much constraint."

"Why are you so goddamned stubborn?"

"It’s a gift." I detest explaining myself. To Beau. To the therapists with their gentle eyes and nonprobing questions that probe. To anyone. I changed the subject.

"What’s this got to do with Orphaline Drucker?"

"Opaline. I think helping her could benefit you."

Beau ignored that. "Drucker’s granddaughter’s been missing for over a year."

"Kids run off. They’re famous for it." I knocked back some beer.

"She was only fifteen." A beat, then, "Opaline thinks she’s been grabbed by a cult."

Unbidden, another cerebral barrage. I sent the images to the place where I keep them all buried.

A full minute. Then I said, "Let me get this straight. I’m to be this kid’s savior because I need saving?"

Beau’s eyes were now blue-laser-focused on mine. I stared back, every neuron in my brain ordering retreat.

"No one knows." Silence on our side of the window screens. On the other, animated gull conversation about crabs or fish. Maybe trash.

"I don’t know shit about finding MPs," I said.

"You were SERE." Beau used the military acronym for Survival, Evasion, Resistance, and Escape.

"That’s different." It was. But I got his point.

"And how was it you were chosen to teach those courses?"

"Right. And the other intel ‘duties’ we don’t talk about?" Air-hooking quotes around the purposely vague noun.

I took another swallow.

The curtains lifted on a breeze smelling of salt and pluff mud.

The room crept a few nanometers from orange toward amber.

Beau tried hard the three short years that he had me. Never got a thank-you from his surly, copper-haired ward.

"Talk about the kid." I broke the silence.

"Better you get the facts direct from Opaline."

"A face-to-face meet?" Blood pulsing in the little shallow beside my collarbone.

Taking my silence as consent, Beau pushed to his feet and handed me a blue-lined page ripped from a spiral notebook. Eyes pointed elsewhere, I flipped it onto the table beside me.

When Beau was gone, I tossed the paper into the wastebasket by my bathroom sink. An icy shower, then I armed the security system, checked for creatures outside my windows, and hit the rack.

Sleep was evasive, which is normal for me. But this was different. I’ve spent so long trying not to think about the past, about those two nights, that my insomniac mind tends to focus on the present. Buy butter. Clean the guns. Change the porch bulb.

That night I was visited by a million ghosts.

Experts say it’s healing to contemplate loss. To talk about it. Bullshit. Revisiting the past makes me nauseous and costs me rest.

After hours of futile twisting in sweat- damp sheets, I got up, padded to the bathroom, and dug Beau’s paper from among the jumble of tissues, Q-tips, and wadded-up hair. A glance at the scrawled address, then I crumpled and returned the page to the discards of my daily toilette.

The living room was dancing with shadows and still as a tomb. I settled on the couch and lowered my lids. Like five black eyes, the hexagon windows watched me force my mind blank.

Kathy Reichs will be speaking at the Dead in Dun Laoghaire crime writing Festival on Saturday 22nd July at the Pavilion Theatre. Tickets available from www.paviliontheatre.ie 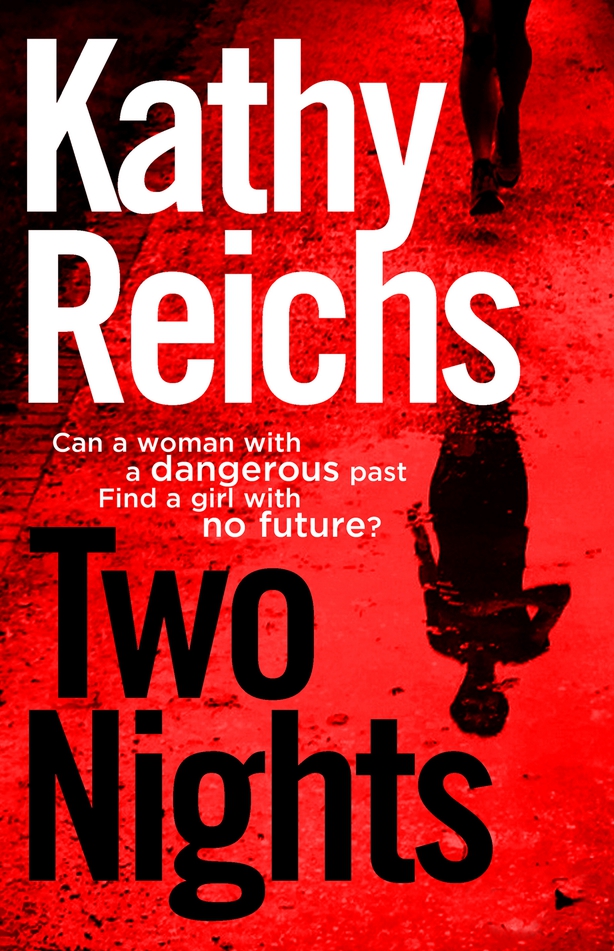 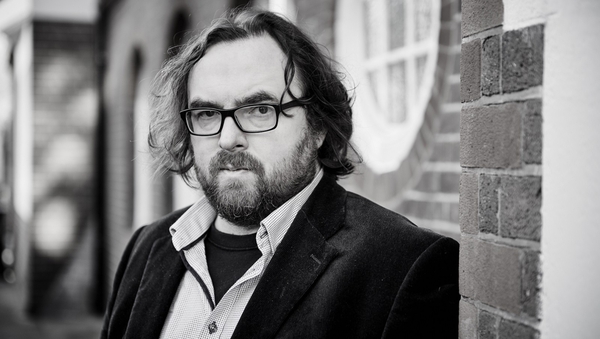 Here and Gone by Haylen Beck - read an exclusive extract