Sundance might be hipper, Toronto is the one that kicks off the Oscar race, and Galway is by far the best craic, but Cannes remains the most iconic and prestigious film festival in the world.

Here are a quintet of hot talking points from Cannes 2017, which runs until Sunday.

Nicole Kidman is the Queen Of Cannes

On the back of her acclaimed small-screen work in Big Little Lies, La Kidman has three movies (two of them co-starring Colin Farrell) and a TV miniseries screening at this year's Croisette - while John Cameron Mitchell's How To Talk To Girls At Parties met with a resounding thud, and Sofia Coppola's The Beguiled split critics right down the middle, her role in The Killing Of A Sacred Deer has already put her in the 2018 Oscar race, and she won raves for a scene-stealing supporting turn in the second series of Jane Campion's detective series Top Of The Lake, which had a special Cannes screening.

Netflix might be the future, but the big screen still rules (for now)

Cannes would be nothing about a spot of controversy, and there's been a little tasty frisson between the festival programmers - from next year, the festival will only admit films in competition that have French theatrical releases - and streaming giant Netflix, who have some high profile titles screening this year. This tension was brought to the floor when jury members Pedro Almadovar and Will Smith enjoyed a lively debate about the merits of movies bypassing cinemas and going direct-to-streaming: Almadovar insisted he'd never give a prize to "a film that is then not seen on the big screen", while Smith disagreed - by the way, his forthcoming cop buddy epic Bright is a Netflix Original.

Adam Sandler can act. No, seriously.

He might be getting a hammering these days for his phoned in (and massively popular) Netflix comedies, but Adam Sandler won serious praise from critics at Cannes for his work alongside Ben Stiller and Dustin Hoffman in The Meyerowitz Stories (New And Selected), a familial dramedy from writer-director Noah Baumbach. He hasn't had reviews this good since the last time he traipsed the Croisette, back in 2002 for Paul Thomas Anderson's Punch-Drunk Love. What's more, as Stiller noted in the lively press conference below, this the only time you'll hear Happy Gilmore mentioned at Cannes anytime soon. Now that movie is a masterpiece.

Amidst the craziness of the accompanying film market (where the world's filmmakers go to hock their product) and the photo-ops that grab the tabloid inches, the Cannes competition is still all about presenting the finest in new world cinema. While the critical consensus is suggesting that it's a far-from-vintage year, highlights thus far have included Michael Haneke's Happy End and Russian director Andrey Zvyagintsev's Loveless - not to mention a star-studded 70th anniversary bash that celebrated past Cannes winners, from La Dolce Vita to Pulp Fiction.

An Irish star is born

Colin Farrell and his Lobster director Yorgos Lanthimos are winning raves for their dark (and we mean seriously dark) thriller The Killing Of A Sacred Deer, produced by Dublin-based Element Pictures, but the real breakout here is co-star Barry Keoghan - he's already come a long way since his days as Wayne the cat killer on Love/Hate, and he's got a role in Chris Nolan's epic Dunkirk, out later this summer.

The crew of THE KILLING OF A SACRED DEER by Yorgos LANTHIMOS #Cannes2017 pic.twitter.com/YGWExqXT0O 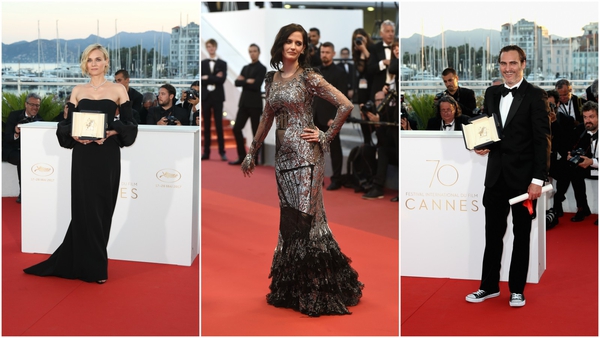