Druid marks its return to the Abbey stage with their critically acclaimed production of Samuel Beckett's Waiting for Godot, which runs April 22- May 20. The show's designer, Francis O'Connor, explores the challenges when it comes to tackling one of modern theatre's most iconic works.

It's a challenge for sure designing a play like Godot. It's not so much coming up with ideas - the text is actually liberating for a designer, so much so that one can re-imagine it quite freely. It's more the expectation another production excites in an audience.

It's a play that has been reset in numerous locations with bold expressive and extraordinary designs, but do they serve the play?

Beckett is economic but very clear in his stage directions and the director Garry Hynes and I felt we should be respectful and responsive to these rather than do a radical re-imagining.

The questions we asked ourselves were:

Who are these people?

Where and what is the Road?

What is the tree?

It was by investigating these questions in detail that we could create the place.

The tree was the key.

I was playing around in the studio, frustrated at imagining digging up a tree or finding a big branch. I had found a photograph of a skeletal tree I really liked but I would never want to make a prop version. It would be fake and feel dishonest.

The eureka moment happened when I re-imagined it as a sculpture made of 6-inch boat nails. I liked the idea of the nails because they would create the texture of a trunk but with an open structure. They allude to the nails on the cross, the wood of the cross. It all seemed to connect beautifully with the play.  The nails are covered in rust and the colour and texture look like bark.

The tree is deeply rooted in a fissure on a floor that is parched of water. It might be a road, or a dried up riverbed. The rock is a large smooth pebble and the moon is like a dark petrol coloured marble floating in space.

The play started at Druid's own Mick Lally Theatre in Galway where we used the white washed rough stone wall of the theatre as the sky.

Garry and I were also conscious of the vaudeville aspect to the play. Creating some kind of proscenium arch was necessary in the Mick Lally Theatre to allow for entrances and exits. I came up with a lightbox proscenium, a sort of 21st century take on the lights around a vaudeville stage.

We had always hoped that we could perform the play outdoors which we did following the 2-week run in Galway. We took the show on an unusual rural tour to some of Ireland’s most remote areas of significant beauty and heritage. Having a conversation with the Irish landscape was one of the things we were most excited about. Making these symbols of the tree and the stone so evocative that placing them in a countryside setting simply gives us the place to play.

The most evocative location was on the Aran Islands. The scenic objects (as I'm writing I've misspelled as oddjects - seems apt) sat in the landscape so perfectly.

We've tried it out now on a few rural places but I'd love to see it in an urban setting. We should do a pop-up version in an empty car park!

One of the happy accidents in this production is that it is getting a wider showing.

The play is now being performed at the Abbey Theatre in Dublin and at the Spoleto Festival in Charleston, South Carolina. I've readjusted the design for both spaces. It has been particularly interesting to re-imagine it for Spoleto. Garry and I are doing the baroque opera Farnace in the same theatre. We have been able to rework the design so it fits partly on the Farnace set.

I’ve integrated both spaces so it will make for speedy changeovers, but also the pieces might start to speak or sing to one another in some way - undoubtedly unlikely but it might be magical if that happened!

Druid's production of Waiting For Godot plays at the Abbey Theatre until May 20th 2017. 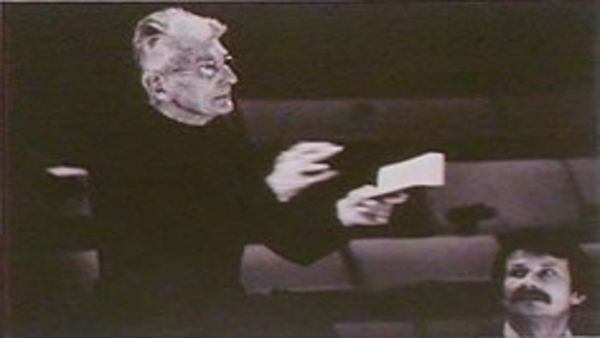