Our Poem Of The Week, presented in association with Poetry Ireland, is Ireland Is Changing Mother, by Rita Ann Higgins.

Don’t throw out the loaves

with the dishes mother.

It’s not the double-takes so much

it’s that they take you by the double.

And where have all the Nellys gone

and all the Missus Kellys gone?

You might have had the cleanest step on your street

but so what mother,

nowadays it’s not the step

but the mile that matters.

are battling it out over that football.

They will bring the local yokels

to a deeper meaning of over the barring it.

And then some scarring will occur

–as in cracked skull for your troubles.

They don’t just integrate, they limp-pa-grate,

your sons are shrinking mother.

your sons were Gods of that powerful thing.

Gods of the apron string.

They could eat a horse and they often did,

with your help mother.

Even Tim who has a black belt in sleepwalking

much less the wet haystack of desire,

even he can see, Ireland is changing mother.

When they breeze onto the pitch

the local girls wet themselves.

They say in a hurry,

Not good for your sons mother,

who claim to have invented everything

from the earwig to the sliotar.

They were used to seizing Cynthia’s hips

looking into her eyes and saying

Now the Namibian Gods and the Bally Bane Taliban

are bringing the local yokels

to their menacing senses,

tell yourself, tell your sons.

For over two decades, Rita Ann Higgins has been a poetic voice for the voiceless. Raucous, anarchic, witty and sympathetic, her poems chronicle the lives of the Irish dispossessed in ways that are both provocative and heart-warming. She has published ten books of poems, the most recent being Tongulish published by Bloodaxe in 2016. 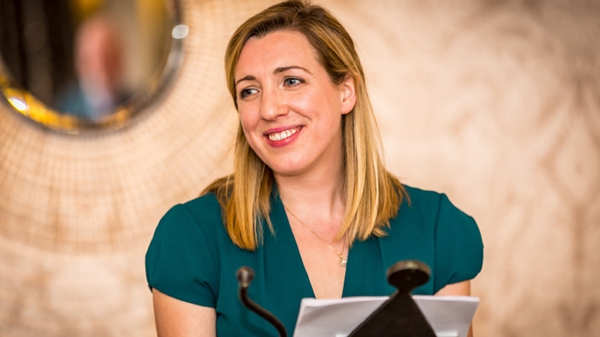