Conor McPherson's masterpiece The Weir is returning to Dublin's Gaiety Theatre, from 20th February - and we've got double tickets to give away.

On its premiere in 1997, The Weir won the Evening Standard, Critics’ Circle, George Devine and Olivier awards for Best New Play, before opening on Broadway in 1999 to unanimous acclaim.

More recently, McPherson's work was voted one of the 100 most significant plays of the 20th Century in a poll conducted by London's National Theatre - it tied at 40th place with Eugene O'Neill's The Iceman Cometh, Samuel Beckett's Endgame and Arthur Miller's A View From The Bridge. It remains one the defining Irish plays of the modern era.

On a stormy night in Brendan’s pub, isolated above a Leitrim town, the men are gathering for their daily pint. The arrival of a stranger in their midst – a beautiful woman – spurs them to impress her with stories. They are stories of souls past, spirits present and spectres unforeseen. One story, however, is more chilling, more sinister and more real than any of them could have foreseen.

A stellar cast has been assembled for this welcome revival, which runs at the Gaiety Theatre from 20th February: Gary Lydon (Brooklyn, Borstal Boy, The Pillowman), Janet Moran (Plough and the Stars, LOVE/HATE), Patrick Ryan (Red Rock) Garrett Keogh (A Skull in Connemara, The Clinic, Veronica Guerin) and Frankie McCafferty (Vikings, Trial of the Century, In the Name of the Father). 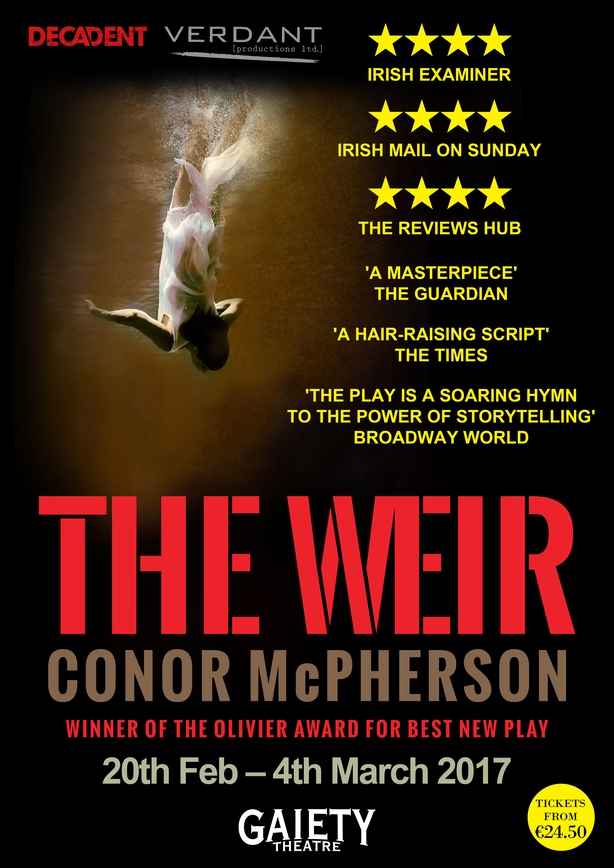 The Weir returns to The Gaiety Theatre. Dublin, from 20th February. To be in with a chance to win a double ticket, simply follow RTÉ Culture on Twitter or Facebook and tell us this: Who wrote The Weir?

Send us your answer along with the hashtag #RTEtheweir before 6pm on Friday evening. Get cracking - and the very best of luck!