Our two final painters have just completed their final challenge and the winner is about to be announced. #PaintingTheNation pic.twitter.com/cARycfrXw9

The 37-year-old came out on top following a tense finale filmed on the banks of the River Shannon. In an all-female finale, Sinead faced off against fellow Corkonian Sinead McCarthy and Meath woman Agnieszka Ryan for the honour of becoming the first winner of Painting the Nation. Her winning painting will now hang in Dublin Castle and will be a permanent part of the Office of Public Works' State Art Collection, a dream for many artists and the chance of a lifetime for an amateur painter.

“Winning Painting the Nation and having my work become part of the national collection, to hang in Dublin Castle, is such a huge honour and truly a dream come true," said Sinead. "I am absolutely thrilled and at the same time humbled by the whole experience. I'm now determined to work harder than ever. Here's to new beginnings!”

In the final, which was filmed in Glasson in Co Westmeath, the three finalists were first asked to paint a riverside picnic with an elimination to follow. At that stage Sinead McCarthy exited the competition leaving Sinead Lawless in a paint-off with Agnieszka Ryan in a final Exhibition Challenge to capture the epic beauty of Lough Ree. 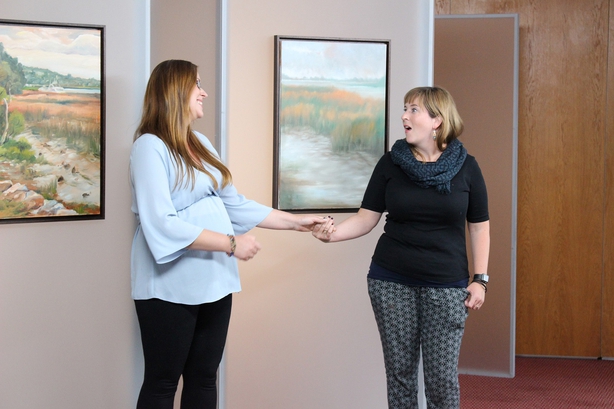 Sinead emerged victorious after the Painting the Nation judges Una Sealy and Gabhann Dunne were impressed by the atmosphere captured in her piece. “This was a difficult decision," said Una Sealy, "but we felt Sinead's piece captured something of the atmosphere of the Shannon, a misty peacefulness”. Gabhann Dunne added: “It was very close but Sinead's landscape just had something more of the lake and its surroundings, giving her the edge”.

Painting the Nation tested the talents of some of the country’s very best amateur painters with challenges held across Ireland. Seven skilled amateur artists were selected from hundreds of applicants to vie for the honour of having their painting chosen by the Painting the Nation judges to become a permanent part of the national art collection. “We have had such a great time painting our way around Ireland," said host Pauline McLynn, "and sharing the paintings in the pop up gallery. I was so impressed by the talent of all our painters and am really delighted to have been part of Painting the Nation”.