Analysis: this football is a treasured piece of GAA history, even more so because it has survived extraordinary circumstances

In 1943, the Roscommon footballers appeared in the All-Ireland senior football final for the first time. This was a particularly remarkable feat given that they had been a junior team just three years earlier. Roscommon beat Cavan to claim their first ever All-Ireland senior title and retained it again in 1944 by overcoming Kerry in the final. Captain on both occasions was Jimmy Murray (1917–2007) from Knockcroghery, who played alongside his brother Phelim and three fellow club players – Liam Gilmartin, Jim Brennan and Johnny Briens.

Jimmy is one of an elite collective who has the distinction of captaining his county to Senior All-Ireland glory on two occasions and to date, is the only man to collect the Sam Maguire Cup in the Hogan Stand on behalf of Roscommon. His success continued at club level as his club St Patrick's won six senior football titles in its history with Jimmy captaining all six winning teams. Jimmy was later appointed Roscommon Senior football manager in 1969 and President of Roscommon County Board in 1984.

Jimmy was an integral part of the village of Knockcroghery in Co. Roscommon, where he ran the family businesses of a shop, pub, hardware store and undertakers. He, like many GAA players, lived, worked and socialised within the community that he represented. Jimmy's level of social interaction was perhaps higher than most in that he served the public in Murray’s pub and spent countless hours talking GAA and recollecting his stories.

In 1984, a documentary was made to celebrate the centenary of the GAA and they sent their cameras to Murray's pub to film Jimmy in full flight entertaining his customers with recollections of his football deeds. The footage in Sunday After Sunday: The GAA 1884-1984 shows how, in Murray’s pub, the past is part of every living day.

It is believed that a pub has been on that site in Knockcroghery for over 300 years, changing hands of different owners on several occasions. In 2016, the Murray family celebrated 100 years of their family connection to the pub. John S. Murray purchased it in 1916 and five years later in 1921, it survived the burning of Knockcroghery by British forces during the War of Independence.

The burning of the village ultimately resulted in the decimation of the local economy and heralded the end of clay-pipe production in the area. Murray's pub survived that burning but it would suffer another fire in 1990.  The fire 32 years ago destroyed much of the main lounge and half of the bar counter. Above that bar counter was the football from the 1943 All-Ireland final which Jimmy claimed as a memento of that historic day for Roscommon. He later asked his teammates to sign the football and hung it proudly from the pub's ceiling from a piece of string.

As the blaze was being fought by the fire brigade, one of the firemen shouted in triumph, 'I’ve got the ball! I’ve got the ball!’. Such was the fame of the football and its location that it was rescued before the rest of the fire was properly fought. Jimmy’s reply to the fireman was ‘Never mind the ball, put out the bloody fire!’.

The fire was put out, the pub interior was renovated and the football was restored to its spot above the bar counter. The survival of the football is not only down to the quick reaction of the fireman but because of the very make-up of the football itself. Because the ball is made of leather, it did not ignite during the fire as leather needs a massive amount of heat before it catches fire. The ball did however suffer from discolouration, became slightly misshapen and the signatures of the Roscommon players were burnt off. Afterwards, Jimmy set about diligently rewriting the signatures of his teammates using a permanent black marker.

The football and its location have become famous but it was Jimmy who so often drew the crowds. Only a few months before Jimmy's death, the Roscommon minor footballers won the first minor All-Ireland title since 1951. As they headed for the square in Roscommon town for the homecoming celebrations in October 2006, the bus paused outside Murray’s landmark pub to pay homage (Sunday Independent, 18 May 2008). A kind gesture and a reminder of the esteem in which Jimmy has been held for generations since.

In August 2022, a community project to erect a stone sculpture in memory of Jimmy was launched in Knockroghery. His memorial will be carved out of Roscommon limestone by a local stonemason, Mark Feeley with the aim to have it in place in the village in time for the 80th anniversary of that famous All-Ireland win in September 2023.

The football is a reminder of how objects can be collected, survive in extraordinary circumstances and allow us to retell our own stories. As long as the football hangs from the ceiling above the bar counter, there is a little bit of Jimmy Murray and a big part of Roscommon GAA history in Murray's pub.

Sincere thanks to Mary Dwyer and the Murray family for sharing their story and for the use of images. The football is one of the objects that features in Siobhán Doyle’s book A History of the GAA in 100 Objects, published by Merrion Press. 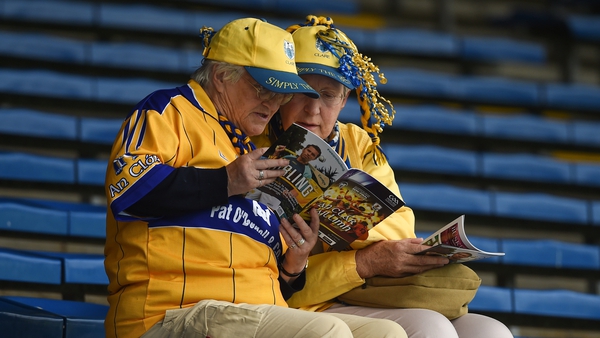