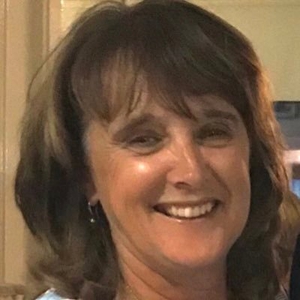 Analysis: from elaborate mayoral ceremonies to fancy industrial floats, Limerick went all out out for the big day

After a two-year absence of parades and celebrations due to the pandemic, the excitement is building in all towns and cities across Ireland as they prepare for their own St. Patrick’s Day parades. St Patrick's Day became an official public holiday in Ireland in 1903 and the first ever St. Patrick’s Day parade took place in Limerick In 1903. It was a modest affair with only the boy scouts taking part, but the parades grew in participants and viewers over the years.

1954 was the year of the first industrial parade in Limerick. According to the Limerick Leader, organisers promised 'a demonstration that will make a truly impressive spectacle’. Thousands lined the streets of Limerick on a bitterly cold Wednesday to watch the parade and listen to the seven bands that played in the procession. 40 city firms took part in the line up which included a sponsored float from the Cleeves factory and a horse-drawn carriage from the largest shop in the city, Todds (now rebranded as Brown Thomas).

Despite the cold, Jean Fitzpatrick can be seen smiling in the photo below as she enjoyed the novelty of participating in the Todds float and being part of the first entry from the shop into St. Patrick’s Day Parade. It was obviously a great success, as it was described as the ‘finest ever seen in Limerick … with coloured flags, banners and uniforms and the lavish decorations of the motor vehicles taking part.’ 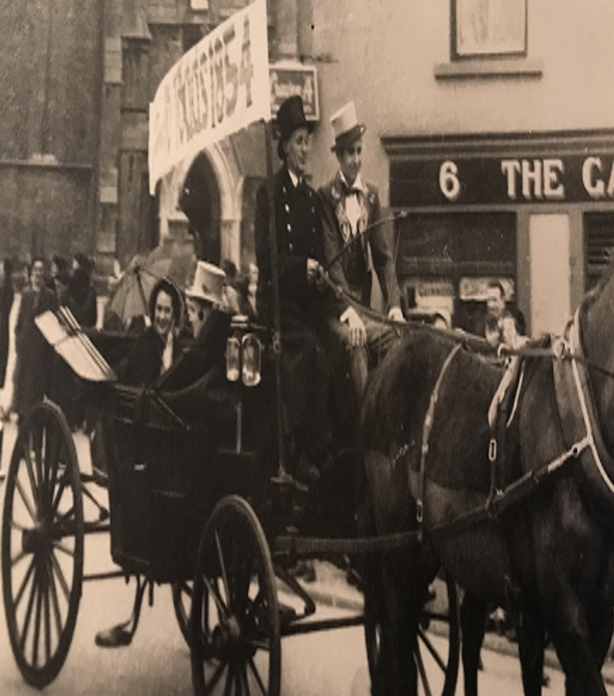 Two years later, the Leader described the St. Patrick's Day Parade in the city as being 'on a more elaborate scale than ever’ and noted that Limerick ‘gave a particularly fine account of itself’ with week- long festivities. Some of the events that preceded the parade included a trip on a chartered bus by the Mayor of Limerick Ted Russell and members of the city council in full official robes to the seaside town of Kilrush, Co. Clare where they were greeted by hundreds of locals on Cappagh Pier. The party boarded a vessel that set sail for Scattery Island before taking the corvette Cliona and then anchoring the boat midstream, where the mayor cast a silver dart into the water, symbolising his authority over the Shannon.

The Cliona travelled onto Limerick arriving at the docks at 8.45pm to the waiting crowds. Open carriages awaited and carried the mayor and the members of the City Council to the Town Hall, escorted by the Dalcassian Motor Cycling Club. After the mayor addressed the crowd, the national anthem was played, closing a full day of celebrations.

At noon on St Patrick’s Day, the parade set out from Sarsfield's Barracks lead by the Boherbuoy Band and took nearly half an hour to pass at any given point. Marching bands, costumed children from dancing schools and units of the Red Cross Society, St. John’s Ambulance Brigade and the Order of Malta were joined by the mayor and councillors, who drove in an open landau carriage, accompanied by mace bearers. 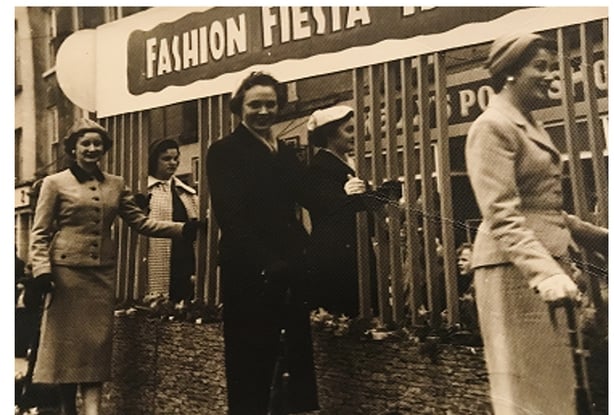 There were over 70 vehicles in that year's procession, representing 34 local firms, including Todds. Jean Fitzpatrick (middle of the photo above) was again one of the models on the Fashion Fiesta float, representing the store with her colleagues. As in previous years, members of their staff were asked to take part in the parade to promote Todds, says Fitzpatrick, and the models chose and wore the latest in-house fashions. Preparations for the float were ongoing close to the last day as Jean recalled that gloves were worn, partly due to the cold but also to avoid ‘paint coming off the float’.

That afternoon, celebrations continued in St. Mary's Park where the rosary took place by members of the public followed by hymns and Irish songs. Local priest Canon Lee performed a blessing of 300 birds who were released into the air at the close of the ceremony.

Other celebrations in the city included an open air mass in Sarsfield Barracks and a torchlight procession from St. Patrick's Church to the Holy Well. Musical events included a concerts and recital by ceili bands in Ballinacurra Weston, while Janesboro hosted an Irish night which included a drill display and dancing. Sean Heuston Place held similar entertainments at the Fairgreen Shrine while the schools concert was held at the City Theatre and Cruises Hotel organised a ceili session.

The following day, a band parade took place through the city and provided great entertainment. To close the festivities, the Savoy Cinema hosted a concert in aid of the Redemptorist Retreat House fund.

Dr. Niamh Lenahan is a a Research Co-ordinator at the Faculty of Arts, Humanities & Social Sciences at the University of Limerick.