Analysis: as The Terror TV show demonstrates, the supernatural was never far away from any discussion of 19th century Arctic explorations

By Shane McCorristine, University of Newcastle

Currently screening on RTÉ Player, The Terror is a critically acclaimed 10-part historical horror series based on the history of a disastrous British Admiralty expedition led by Sir John Franklin to seek a northwest passage through the Arctic to Asia in 1845. The series is produced by Ridley Scott and based on the 2007 novel of the same name by Dan Simmons.

After Franklin's ships, the Erebus and Terror, became trapped in the ice for successive winters, the crew were decimated by illness and starvation. Franklin died in June 1847, and in 1848 the expedition disintegrated as bands of survivors abandoned the ships and marched south towards King William Island and the Canadian mainland.

RTÉ Player trailer for The Terror

Inuit travellers on King William Island later encountered starving and poorly clothed white men, some of whom had engaged in cannibalism. Meanwhile the lack of any news about Franklin's fate meant that the British Admiralty was inundated with proposals, rumours, and even dream revelations from ordinary people, keen to help solve the mystery. By the time rescue expeditions reached the King William Island region in the late 1850s, all 129 crew members were dead, the ships had disappeared, and there was almost no documentary evidence found to reconstruct what happened.

As if the bare historical facts were not gothic enough, writers have turned to horror for over 150 years when speculating about what happened. As part of this long tradition of filling in the narrative blanks, The Terror adds a supernatural twist to the story by having Franklin's starving crew pursued and picked off by a shadowy monster that seems to represent both the horror of the Arctic and the horror of their own souls (yes, Franklin does get a mention in Joseph Conrad's Heart of Darkness!).

So what has a TV show about an Arctic monster got to do with the history of the Franklin expedition? Well, far from being just another fantasy take on the historical past, The Terror has its roots in some of the chilling supernatural experiences that were reported during the British exploration of the Arctic, Franklin's expedition in particular. These supernatural experiences are important because they expose our long-held cultural stereotypes about the far north as a place of magic and mystery. They also provide insight into the psychological impact that the disappearance of the Franklin expedition had for those loved ones left behind.

As I show in my book The Spectral Arctic: A History of Dreams and Ghosts in Polar Exploration, spectral experiences reflect the complex way that people actually thought about the Arctic in the past. The example of psychic searching shows how women could have access to a zone they were not traditionally authorised to enter.

The loss of the Franklin expedition inspired an outpouring of psychic activity in Britain ranging from national prayer sessions to spiritualist séances. In 1849 and 1850, after the first Admiralty search and rescue missions failed to locate the ships, Franklin's widow Jane Franklin turned to psychics, crystal-gazers and clairvoyants to shed light on the mystery. These were generally young illiterate women who were placed into trances by male mesmerists and "sent" to the Arctic to report on the condition of the explorers and the location of the ships.

The most celebrated clairvoyant of them all was a young woman named Emma, the "Seeress of Bolton". In her séances, she stated that Franklin was alive and "comparatively well", although his cheeks were sunken. Using a sample of Franklin’s hair to connect with him, she said he was in "good hope of getting to England in nine months and a half".

Emma's visionary journeys were widely discussed in the press and were seen by Lady Franklin and several naval experts as complementing, rather than undermining, official naval and land journeys in search of the expedition. This was remarkable given Emma’s distance from the power structures that usually controlled how Arctic exploration was practised and communicated.

The Terror picks up on this historical theme by giving clairvoyant powers to Franklin’s second-in-command, Francis Crozier. His ability to sense events happening far away draws him into a relationship with an Inuk woman who also possesses shamanic power. The use of clairvoyance, then, points to female presence and authority in the Arctic, a theme not traditionally emphasised in polar histories.

In 1850, Lady Franklin was contacted by an Irish shipbuilder Captain William Coppin, who claimed that the ghost of his deceased daughter, Weesy, appeared to his family in the form of a blue orb. When asked about the Franklin expedition, Weesy gave an enigmatic message that seemed to indicate its location ("Erebus and Terror, Sir John Franklin, Lancaster Sound, Prince Regent Inlet, Point Victory, Victoria Channel"). 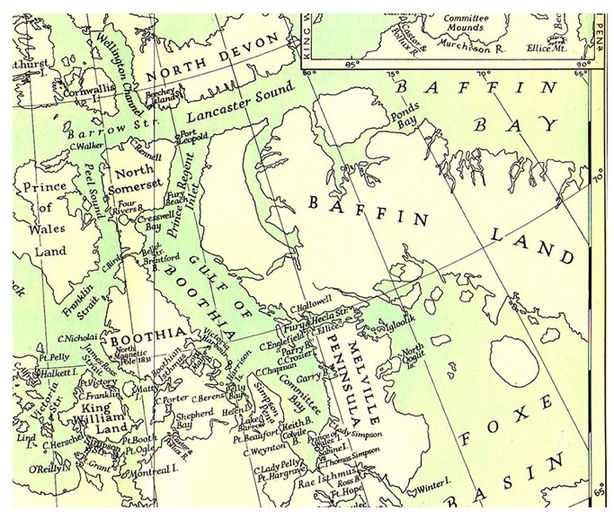 Lady Franklin was deeply impressed by Coppin’s "supernatural revelation". She told her supporters about Weesy’s message and gave orders for a ship to search the Prince Regent Inlet area, south of Lancaster Sound. In 1852 this expedition discovered an entrance from Prince Regent Inlet into a passage of water that had just been named "Victoria Strait" by the explorer John Rae. However, at this crucial point, the ship turned away from the King William Island region and so did not discover the signs of the expedition.

It was not until 1859 that Lady Franklin found some closure, when the search expedition led by the Irishman Leopold McClintock discovered a document housed in a cairn at "Victory Point". For Coppin and Lady Franklin, the discovery of the fate of Franklin via places called "Victoria Strait" and "Victory Point" validated Weesy's spectral message.

Despite this, neither party made the story public, probably because spiritualism had become embarrassing for Lady Franklin by the late 1850s. As Lady Franklin died in 1875, Coppin’s claim that Weesy influenced the search was fiercely denied by her companion and niece, Sophia Cracroft, as well as the explorers Rae and McClintock.

However, letters kept in the archives of the Scott Polar Research Institute at the University of Cambridge proved them wrong. They show that Lady Franklin, Cracroft and others sought out clairvoyants in the late 1840s and that officials from the Admiralty and the Royal Geographical Society were kept abreast of their visionary journeys. They also show that Coppin was correct in claiming that the ghostly message directed search expeditions to the Prince Regent Inlet region.

This archival evidence means we should make room for the supernatural in the history and representation of the Franklin expedition. It also suggests that we look again at another of Coppin’s controversial claims - that Charles Dickens was told about Weesy’s message by Lady Franklin. It is very likely that Coppin’s story inspired The Frozen Deep, a clairvoyant-themed play that Dickens co-wrote with Wilkie Collins in 1856. This play began the long tradition of supernatural Franklin fiction that leads up to Simmons’s The Terror and the current TV adaptation.

This is an unbelievably exciting time for Arctic historians. After decades of high-tech searches, the wrecks of the Erebus and Terror were finally located in 2014 and 2016, amid great fanfare in Canada. These are being painstakingly examined during the all-too brief summer diving seasons and it is hoped that they will reveal more details about what happened on the ships.

Yet the supernatural is never far away from any discussion of the Franklin expedition. News reports of the discovery of the Terror in 2016 mentioned that some Inuit (whose testimony and geographical knowledge of the Arctic led to the location of the shipwrecks) believe that King William Island is still haunted by the spirits of Franklin and his men.

Dr Shane McCorristine is a Lecturer in History in the School of History, Classics and Archaeology at the University of Newcastle. He is a former Irish Research Council awardee.