One of the key government responses to the recession was to cut the public sector pay bill. both by cutting pay and by reducing the number employed. Total employment in the public sector fell by over 10% from 325,117 in 2008 to 291,838 in 2013. The main sectors experiencing contraction in employment included local authorities (down by 21%), non-commercial state agencies (less 22%), and the health sector (down by 10%). The civil service itself contracted by 8%. 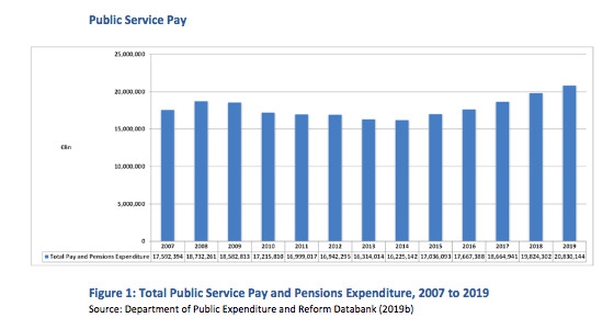 However, in the context of economic recovery,  the growth in public sector numbers, and the restoration of public sector pay,  total expenditure on public service pay and pensions increased to almost €21bn in 2019: representing an increase of €4.6bn or 28% on 2014, or 26% in real terms, adjusting for changes in consumer prices.

Dr Patrick Malone is a Post-Doctoral Fellow at the UCD Geary Institute for Public Policy at UCD.