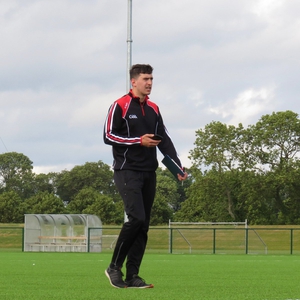 Analysis: a new research study tracks the physical fitness of Gaelic football and hurling referees as they cover up to 10km in each game

How could Gaelic football or hurling be played impartially without a referee? Quite frankly, they couldn’t. Referees are responsible for enforcing the laws of the game and regulating the behaviour of players. Their performance is coming under more and more scrutiny in the era of digital media. In addition, the physical preparation of Gaelic football and hurling players is now almost professional in nature. In order to officiate the modern game, referees also need to develop and maintain appropriate fitness levels. It is only logical then that increased efforts should be made to support them in all aspects of their preparation.

In a research study being carried out by the author at the School of Health and Human Performance at Dublin City University, and funded by the Irish Research Council and the GAA, global positioning systems (GPS) technology, heart rate monitors and measurements of lactic acid are being used to track Gaelic games referees during national league and senior championship games.

The physiological demands of any sport are determined largely by the activity patterns of the game. Gaelic football and hurling are intermittent in nature. Both players and referees have to sprint repeatedly followed by recovery periods involving standing, walking or jogging.

During the 2017 senior championship, Gaelic football and hurling referees covered 9.8km and 9.6km per game respectively. The majority of the total distance involved walking and jogging. Sprinting, which was classified as running at speeds above 18km per hour, accounted for around 10 percent of the total distance. The length and duration of the sprints and recovery periods in hurling and Gaelic football are largely unpredictable due to the fact they are imposed by the pattern of play and can vary greatly from one game to another. Since 2016, the number of sprints performed by referees has ranged from 50 to 100 per game.

An improved understanding of the physical demands placed on Gaelic games' referees has facilitated the development of scientifically-based training programmes. Elite referees now undertake a 12-week training programme prior to the national leagues and attend regular fitness sessions at the GAA’s National Development Centre in Abbotstown throughout the championship season.

During each training session referees are tracked using GPS and heart rate monitors. Developing the appropriate fitness attributes that will allow referees to recover quickly between sprints is a key focus of training. Preliminary heart rate data from the 2018 Championship indicates that referees are now recovering more rapidly after high intensity sprints.

Referees are now expected to train and maintain a high level of fitness year round. Their fitness levels are assessed in January prior to the national league and again in April before the start of the championship season. Failure to meet the required standards results in exclusion from match selection.

The type of test undertaken depends on the fitness component being measured (speed, strength, endurance etc). Using GPS and heart rate data along with blood levels of lactic acid collected before, during and after games, this research is currently developing and modifying fitness tests to ensure that they are appropriate for hurling and Gaelic football referees.

Championship panel referees also undergo an additional exercise stress test with an electrocardiogram (ECG) in DCU’s School of Health and Human Performance. This test assesses heart and lung health and screens for structural and electrical abnormalities in the heart at rest and during exercise. Based on the cardiovascular fitness classification published by, the American College of Sports Medicine, elite hurling and Gaelic football referees currently rank in the top one to five percent for their age group.

Championship panel referees also undergo an additional exercise stress test with an electrocardiogram (ECG) in DCU’s School of Health and Human Performance. This test assesses heart and lung health and screens for structural and electrical abnormalities in the heart at rest and during exercise. Based on the cardiovascular fitness classification published by, the American College of Sports Medicine, elite hurling and Gaelic football referees currently rank in the top one to five percent for their age group.

From the RTÉ GAA podcast, Damian Lawlor talks to recently retired hurling referee Brian Gavin about several initiatives he would like to see introduced to the game on behalf of referees

James McGrath speaks to RTE Sport about his decision to retire from the inter-county referee panel in the light of the appointments committee not appointing him as one the match officials for the 2018 final pic.twitter.com/eHrGrkU2wQ

It is important to remember that physical fitness is only one of the many factors that contribute to referee match performance. Recent improvements in physical fitness is a clear indication of the hard work being undertaken by elite hurling and Gaelic football referees and the commitment by the GAA to improve the standard of refereeing.

Aidan Brady is a Postgraduate Researcher at the School of Health and Human Performance at DCU. He was awarded an Irish Research Council Enterprise Partnership Scheme award in 2017