Opinion: huge problems still exist within Ireland's Direct Provision system, but initiatives are springing up around the country to ensure refugees are welcomed and find safe and secure places to continue their lives

They are given a small weekly allowance, not allowed to work and are allocated spaces in shared hostel-type living situations. While they are waiting decisions on their applications for asylum, they are made dependent on state support - and they may be kept in this limbo for more than ten years. We know of children who lived their first nine years in Direct Provision. Ireland and Lithuania are unique in the EU in stopping asylum-seekers from working.

Today, more than 4,800 women, men and children live in 32 Direct Provision centres across the country and suffer its consequences. They have little privacy, experience high levels of isolation and live under the regime’s many petty house rules about when they can come and go, have visitors, rigid meal times and so on.

It beggars belief that we continue to implement this inhumane system in the knowledge that a future redress board is inevitable.

When they turn 18, young people cannot go onto higher level education, having to pay unaffordable fees at international student rates. Their Leaving Certs bring them to a dead end, while their school friends progress with their lives.

As researchers, we know that Direct Provision is a contributor to and cause of serious mental and physical health deterioration. This system fails to recognise people’s most basic social, cultural, gender, ethnic, and religious needs, enforcing penal conditions on people over long periods of time.

It is a life of continuous boredom, systematically isolating the community of asylum seekers in Ireland, enforcing institutionalisation and powerlessness and distorting family life. Adults are infantilised and children are marginalised, fearing to tell their schoolfriends where they live.

Recent "improvements" are not consistent and are no more than tinkering at the edges. As a country with an extensive history of the consequences of locking people away, it beggars belief that we continue to implement this inhumane system in the knowledge that a future redress board is inevitable.

Its supporters justify Direct Provision by making reference to its role in reducing "pull factors" that they fear make Ireland an attractive place to seek asylum. In other words, by creating a punitive asylum system here, people fleeing persecution or poverty will "choose" some other state as their end-destination.

Actual trends indicate otherwise; numbers of asylum claims have followed European trends since 2000. This has not stopped this inhumane system from continuing. Other justifications reference the Value-for-money Report (Department of Justice, 2010). However, this report only looked at the costs of welfare and no attempt was made to look at the benefits of allowing people access to work.

While there is a noticeable rise in nationalism and racism across Europe, one cannot but be inspired by the spirit of generosity and empathy that is also growing. Groups of people are coming together and initiatives are springing up to ensure that refugees are welcomed and find safe and secure places to continue their lives. Ordinary people are challenging isolation by offering their homes, travelling to meet and support people stuck in temporary camps and in transit and seeking out ways to offer what help they can.

One of these initiatives is the City of Sanctuary. Started in the UK, this initiative is committed to "building a culture of hospitality and welcome, especially for refugees seeking sanctuary from war and persecution". It’s a network of local groups who come together to ensure that this culture of hospitality and welcome becomes a sustainable reality in their localities.

Ireland’s Places of Sanctuary is part of this movement. It is "a network of groups in towns, cities and local communities which share the objectives of promoting the integration, inclusion and welfare of refugees, asylum seekers and vulnerable migrants". Initiatives in Ireland include Sanctuary in the Oireachtas and there are now at least nine Sanctuary groups across cities and towns here.

The higher education sector is also making strides. DCU was the first university to be granted University of Sanctuary status in December 2016, closely followed by UL earlier in 2017. UCC and other higher education centres are now diligently working towards achieving this status.

Over the last number of years, UCC staff, students and friends have worked to promote and provide opportunities for integration and relationship-building between the university and migrant communities. These were recognised in the University’s Staff Recognition Awards this year. The Exceptional Citizenship category recognised staff engagement with and support of people in Direct Provision, particularly children. At Christmas and Easter parties, staff and students come together with children and their families living in centres across the city and county to celebrate and have fun.

No attempt was made to look at the benefits of allowing people access to work.

Children attend the Glucksman Art Gallery for multi-media workshops and work there as interns, providing some respite from the mundanity and exclusion of the Direct Provision system. At exhibitions of the children’s work we see how empowering and hugely positive these engagements are. Seeing the pride and excitement of both children and parents in having their work on public exhibition is heartening to everyone.

When the time comes to go "home", all file back into buses. Outside the buses, divided again, we look through the windows and see the prison bars symbolised. It hurts us all and we won’t stop working to bring it to an end. 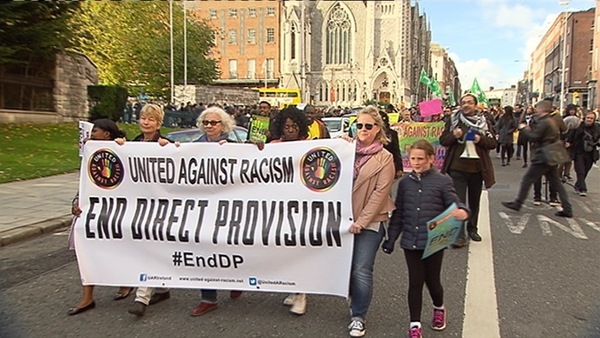