Féile '95 organisers say they have a new venue for the three day musical event. The location is anyone's guess.

MCD, who organise the event, say they are keeping the location of the venue under wraps for the moment but will make an announcement next week. They want to reassure the thousands of music fans who have bought tickets for the event that it will go ahead on the 4th, 5th and 6th of August as planned. They say the new location has the support of the local council and the local business community.

The event had previously been held at Semple Stadium in Thurles, County Tipperary and was known as The Trip to Tipp. 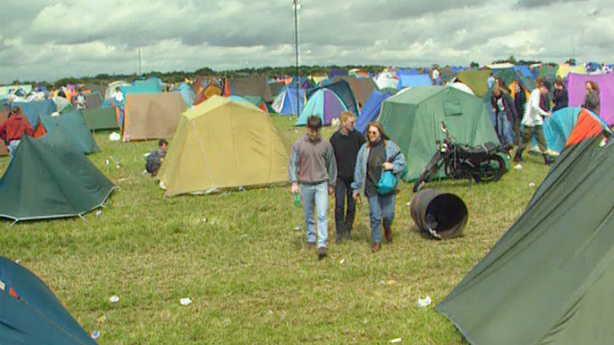 An Bord Pleanála ruled against holding such an event at Mondello Park in County Kildare. This decision raises questions around planning permission for other major events due to be held around the country such as the National Ploughing Championships and the Rose of Tralee. An Bord Pleanála files relating to the Mondello decision are to be made public.

Despite the uncertainty over the event, MCD has reported a brisk sale of tickets for Féile even without a confirmed location.

Promoters and ticket sellers report a brisk sale in Féile tickets across the country even though those buying them don’t have a clue where they’re going.

An RTÉ News report broadcast on 23 June 1995. The reporter is Carol Coleman.

FÉILE
THE TRIP TO TIPP