St Patrick visits 'Scaoil Amach an Bobailín' studio for a glass of porter.

'Scaoil Amach an Bobailín' presenters Seán Bán Breathnach and Cynthia Ní Mhurchú are treated to a visit by St Patrick on his special day. Joining them in the studio audience, St Patrick, played by Seán Ó Cathaláin, tells them what he can about Heaven. It is some 1500 years since he has been in Ireland, and every thing is different now: religion, the young people, girls in mini skirts....

But there's one thing he can't have in heaven: porter. So reporter Rónán Mac Aodha Bhuí brings him a glass of porter to celebrate his day.

This episode of 'Scaoil Amach an Bobailín' was broadcast on 17 March 1991.

Loosely translated as 'Let It All Hang Out', the programme was designed to be zany, informal and appeal to Irish speakers both inside and outside the Gaeltacht. It was presented by Seán Bán Breathnach and Cynthia Ní Mhurchú. There were also two young reporters, Rónán Mac Aodha Bhuí and Bláthnaid Ní Chofaigh, who went around the country looking for lively stories. 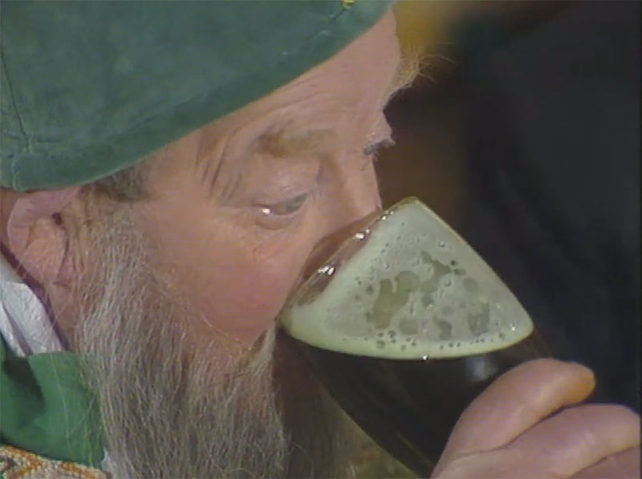 St Patrick was a Protestant 1995

Snow and a biting chill make travel difficult across Ireland but children enjoy the wintry conditions.