Joy for Cork hurling team and supporters after winning a twentieth All Ireland title.

Cork beat Kilkenny 3-9 to 1-10 to win the All Ireland Hurling Final and the Liam McCarthy cup.

A crowd of 68,249 were in Croke Park to see Cork and Kilkenny meet for the first time in 19 years in the championship final. 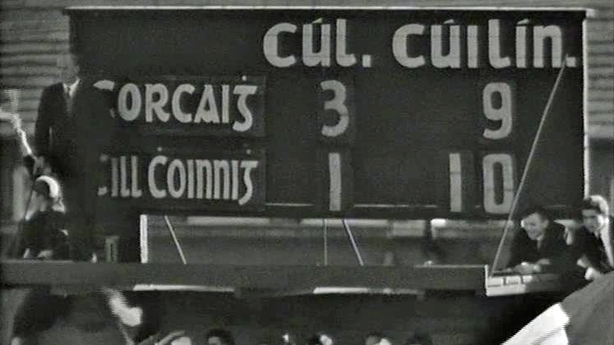 The final score in the 1966 All Ireland Hurling Final

John Bennett got the last score of the game giving Cork their twentieth All Ireland hurling title by a five point margin.

As the final whistle is blown, roars ring out around Croke Park and fans invade the pitch in to celebrate with the Cork team.

The crowd absolutely tumbling into the field in celebration.

The Cork players try to get through the crowd to the Hogan Stand with supporters carrying goalkeeper Paddy Barry shoulder high.

Captain of the Cork team Gerald McCarthy is congratulated by President Éamon de Valera and receives the Liam McCarthy cup. There were special cheers for Jim Barry, who for forty years has been a trainer of Cork teams.

I don't think I’ve ever seen a team so delighted after winning an All Ireland as this young Cork team and their followers.

Accepting the trophy on behalf of the team captain Gerald McCarthy pays tribute to the Cork fans and calls for three cheers for the Kilkenny team.

It’s a great honour for me to accept this cup on behalf of Cork. I would like to thank Kilkenny on the wonderful sporting game they gave us.

After the acceptance speech, the crowd chants for Christy Ring but he is nowhere to be found.

The All Ireland Hurling Final was broadcast on 4 September 1966. The commentator is Michael O'Hehir.