Prize winners meet a racehorse they will own for a year on The Late Late Show.

Following a competition by electronics firm Toshiba and The Sunday World, four people have been declared the winners of a racehorse.

The winning four Edward Valentine from Tallaght, Teresa Browne from Kildare, Christopher Taylor from Mallow, County Cork, and Bernard O'Brien from Tuam in County Galway were on 'The Late Late Show' to meet their prize.

These four people are going to own a horse for a year.

They will own the horse for the duration of one year and if it wins during that time, they take the winnings. The cost of keeping the horse is paid for by Toshiba. 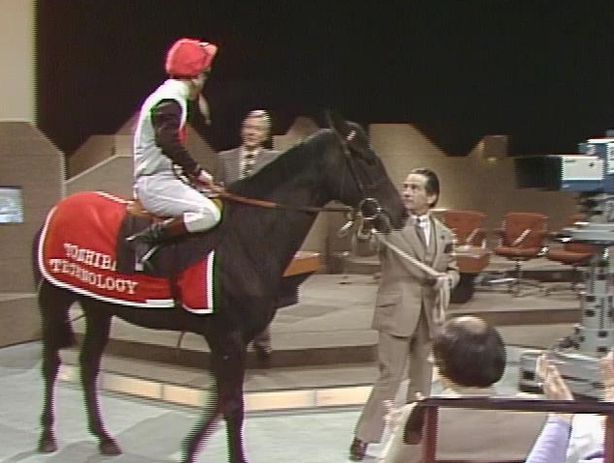 When is it going to win its first race?

The horse will begin racing in weeks and the four owners will attend each of the races. A busy few months ahead for ‘Toshiba Technology’ with races at Leopardstown, Phoenix Park, Galway, Ballinrobe, Roscommon, Mallow, Listowel, and The Curragh.

The Late Late Show broadcast on 25 April 1981. The presenter is Gay Byrne.