After the success of 'Starsky and Hutch' David Soul is optimistic about acting and television making the world a better place.

David Soul plays the role of detective Kenneth 'Hutch' Hutchinson alongside co-star Paul Michael Glaser as detective David Starsky in the popular television series 'Starsky and Hutch'. He is in Ireland to film the 'Manions of America'.

He’s a fine, handsome, hulk of a chap. Very personable and most amenable as well.

David Soul talks about his path to acting from early aspirations to be a professional baseball player and then a history teacher. He then arrived at a moment in his life when theatre and music became the most important things to him.

I chose the theatre.

When he was first offered the role as Hutch in the series ‘Starsky and Hutch’, David Soul was far more interested in the purism of the theatre and was quite dismissive of television. Neither he, nor his co-stars nor the producers thought that the series would be so successful.

The success of 'Starsky and Hutch' has given David Soul a certain amount of what he calls "usable power" to do things that he wants to do. He believes that television has the power to be the single most powerful medium to bring people together. David Soul hopes that he can play his part in this process as an actor. 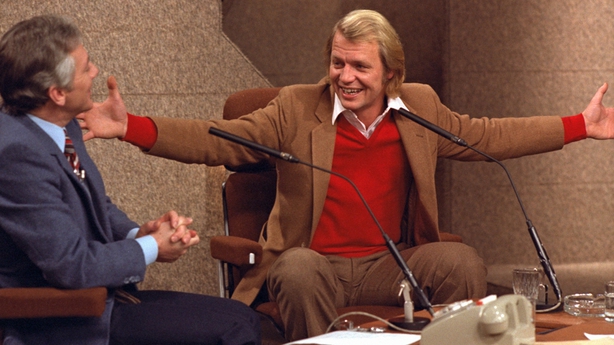 The organisation objected to it on the grounds of violence.

David Soul defends the depiction of violence on the grounds that the characters of Starsky and Hutch were taking care of the bad for the greater good and the bad always lost.

This episode of The Late Late Show was broadcast on 6 December 1980. The presenter is Gay Byrne.