Blue in Heaven perform 'All My Love' on 'The Late Late Show'.

Irish rock bank Blue in Heaven open a new season of ‘The Late Late Show’, the first time the show is broadcast on a Friday night.

Blue in Heaven's debut album, 'All The Gods Men' released in 1985 on Island Records is produced by Martin Hannett.

In October 1985 the band is embarking on a tour of Europe, after which they will tour America, before working on their second album 'Explicit Material' at Compass Point Studios in Nassau, Bahamas.

Before the band perform ‘All My Love’, presenter Gay Byrne notes,

It’s a long way from Churchtown to the Bahamas, so best of luck to them.

This episode of ‘The Late Late Show’ was broadcast on 13 September 1985. 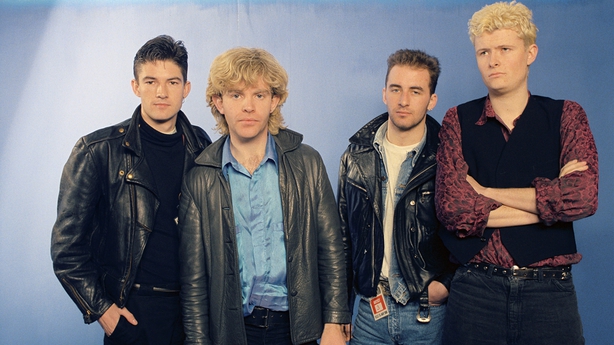 Blue in Heaven backstage at Self-Aid in 1986.