With war in Europe the US State Department sent the SS President Roosevelt to Ireland to bring Americans home.

Passengers were taken from the pier in Galway on board the tender Cathair na Gaillimhe to board the vessel the SS President Roosevelt.

American citizens from across Europe travelled to Galway on the west coast of Ireland to begin the final leg of their journey to the United States.

As each train arrived in Galway, the Irish Tourist Association met the passengers and provided them with information about accommodation in the city as they awaited their departure.

On a busy market day in Galway, Americans have been making their way to the pier with their luggage.

There are lots of men, crowds of women and literally hundreds of children of all ages and babies a few weeks old.

Reporter Denis Johnston sets the scene on the day.

For three days, they've been coming into Galway, this picturesque stone grey capital of Connacht and I'm not exaggerating when I say that Galway's been pretty full.

Passengers were provided with information on a place to stay as they awaited their departure.

Galway is a very picturesque town and today the streets have been filled with old carts and wagons and farmers and fishermen ... and through all these people, the Americans have been trickling down to the pier here with their luggage, their trunks, their suitcases.

Amongst the travellers was a boy carrying a wriggling kitten and a woman with two German Dachshunds. On the pier, the wife of a famous film star was being photographed.

There was a man who escaped from Antwerp on a bicycle and only managed to get out of Belgium on a British Destroyer.

The Irish Civic Guard took women and children to the top of the queue so that they did not have to stand for hours while the remaining  passengers got through the thorough examination.  Passengers had to have passports validated by American Consular Authorities. Everybody who had the necessary passport has been able to get on board. The ship travelled with over a thousand passengers and crew and over two hundred tonnes of luggage.

Nobody is being left behind.

Some of the passengers talk about their experience and their plans upon arrival in America.

George Washington Harrison V, son of Robert R Harrison the Vice Council from Cork and his sister Maureen Harrison are two young people travelling to the US to start a new life. George Washington Harrison was just three months old when he left the United States. The first thing he wants to see on arrival in the US is his grandmother. Maureen, who has only spent two months in the US as a young child, plans on attending the University of Michigan.

Another passenger Norman Butler has made his way from Spain to Galway, travelling mainly by train and passing through the battlefields of France en route. 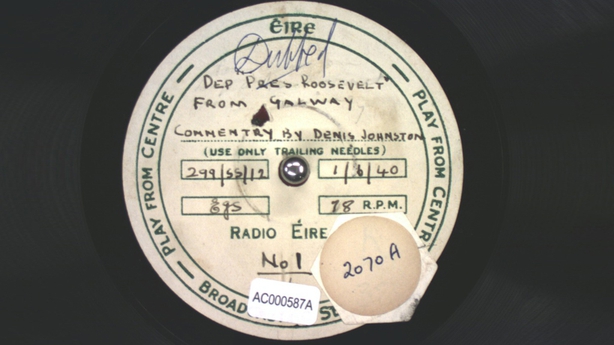 This report was broadcast on 1 June 1940. The reporter is Denis Johnston.